So we started our week long western European tour in London, then headed to Brussels, then to Amsterdam. After that we wanted to go to Berlin, but it’s a bit far (about 6 hours by train), so instead we made a last minute decision to take the Thalys to Paris for 24 hours of non-stop, unabashed tourism. It was awesome.

We booked a hotel in the first arrondissement right next to the Louvre for easy access to all the major sites. The good news is Paris is actually quite small for a large city, and the Metro is extremely easy to use. We bought a 24 hour metro pass and headed to the Grand Hotel du Palais Royal, where we dropped our bags and walked across the street to take in what is arguably the world’s greatest museum. I purchased tickets to the Louvre online (which definitely saves time) and the concierge printed them out for us. Wander around the iconic Pyramide du Louvre before heading into the museum. 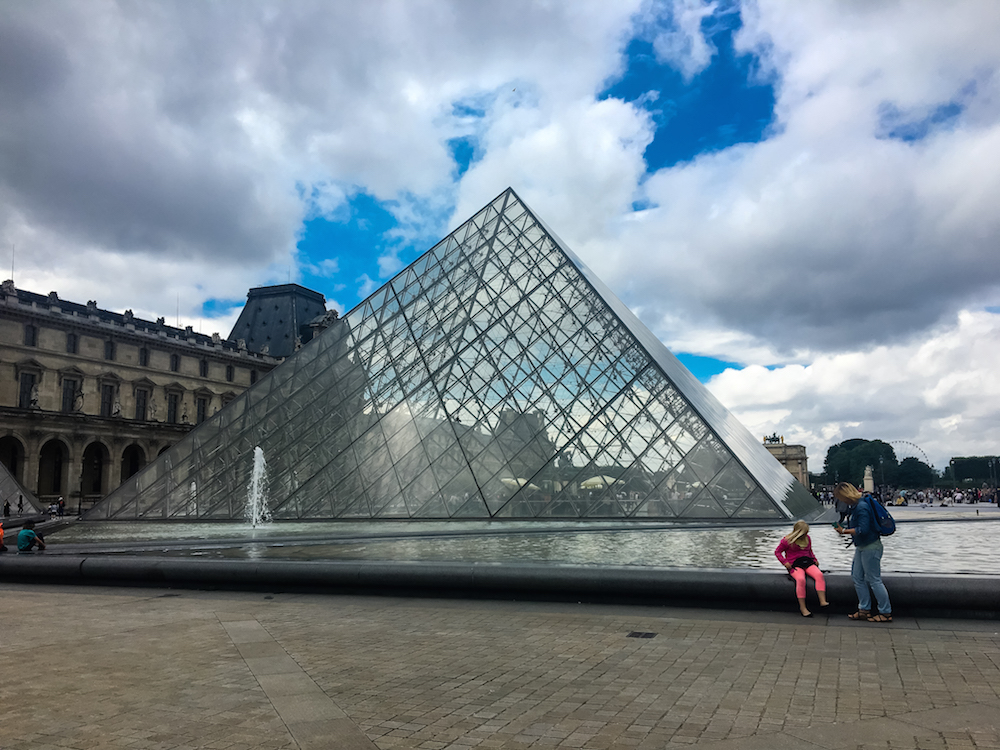 Of course you will want to see the Mona Lisa, you and all of the hundreds of people pictured below as well. We also enjoyed the Venus de Milo, Egyptian Antiquities, and the Oceanic arts section, as well as the old masters paintings. I would make it a point to visit the decorative arts section to see the rooms made up in classic Louis XIV adornments.

After the Louvre we of course had to stop for some Parisian croissants and coffee.

From here we headed up to Montmartre. Part of visiting Paris is really just taking in the different neighborhoods, and Montmartre is beautiful. We wandered the streets a bit

before taking the Funicular (people who follow me know that I take every funicular I am anywhere near) up to the Sacre Coeur. Note that your day pass for the Metro also works at the funicular – no need to buy another ticket. 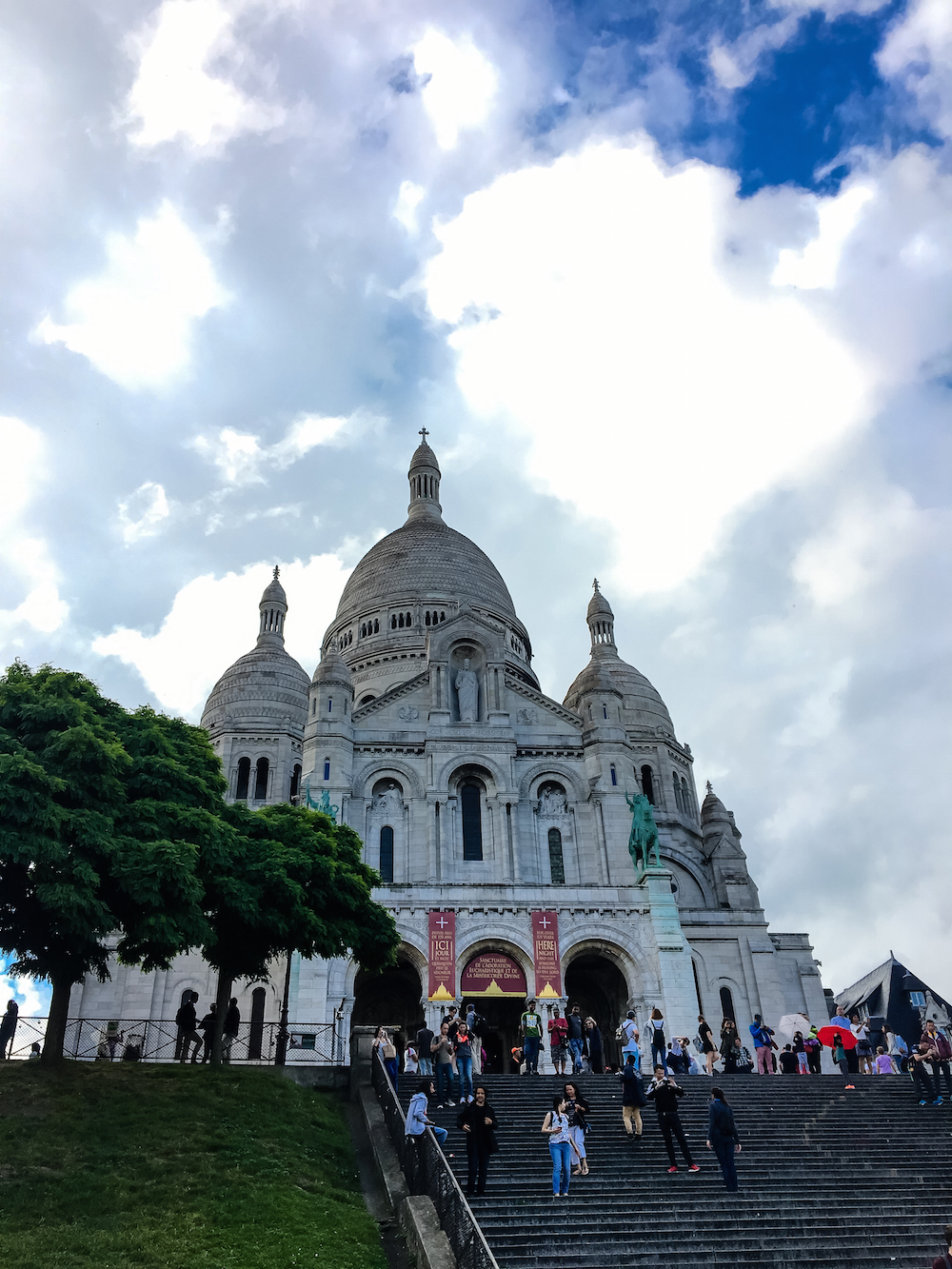 Take in this gorgeous view of Paris below. 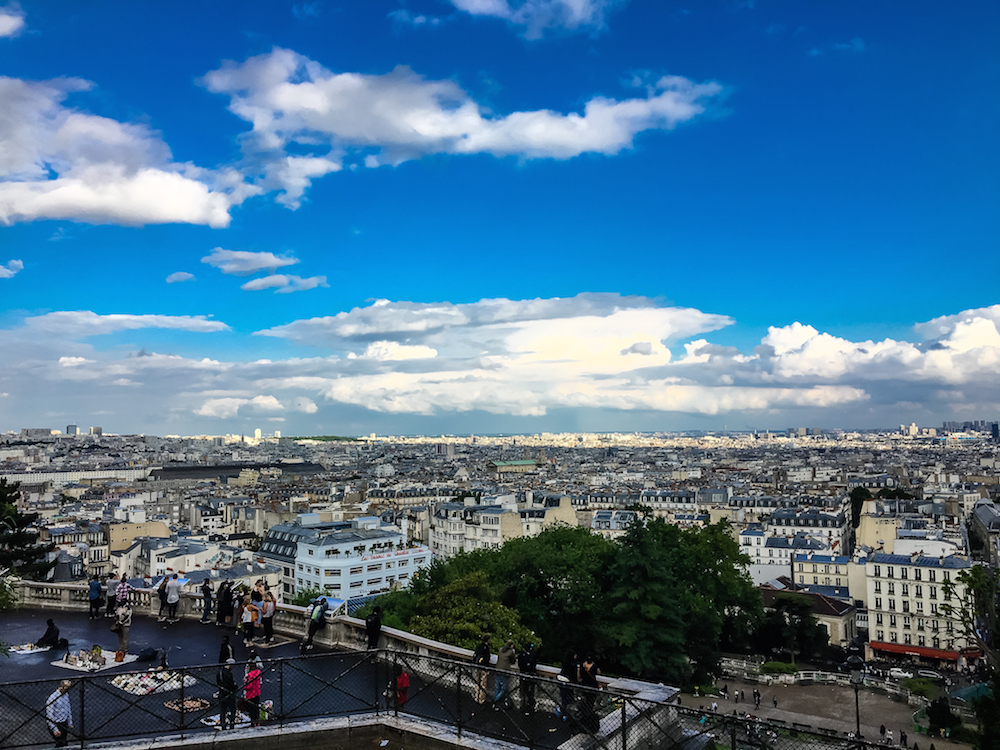 After that, we did a little shopping in Montmartre, and of course stopped for some wine.

From there we took the metro down to walk the Champs Elysees before heading to the river bank. The singular best tourist thing to do in Paris is take a river cruise on the Seine. You will see all the major sites like Notre Dame, and take in the students hanging around the Sorbonne and the glorious Paris evening. I HIGHLY recommend taking the cruise right before sunset, as it heads down the river and then back, so you can see everything in the daylight and then again lit up at night – Paris is the City of Light after all. You can get tickets from your concierge or right at the dock. We saw the Eiffel Tower in the light of day, 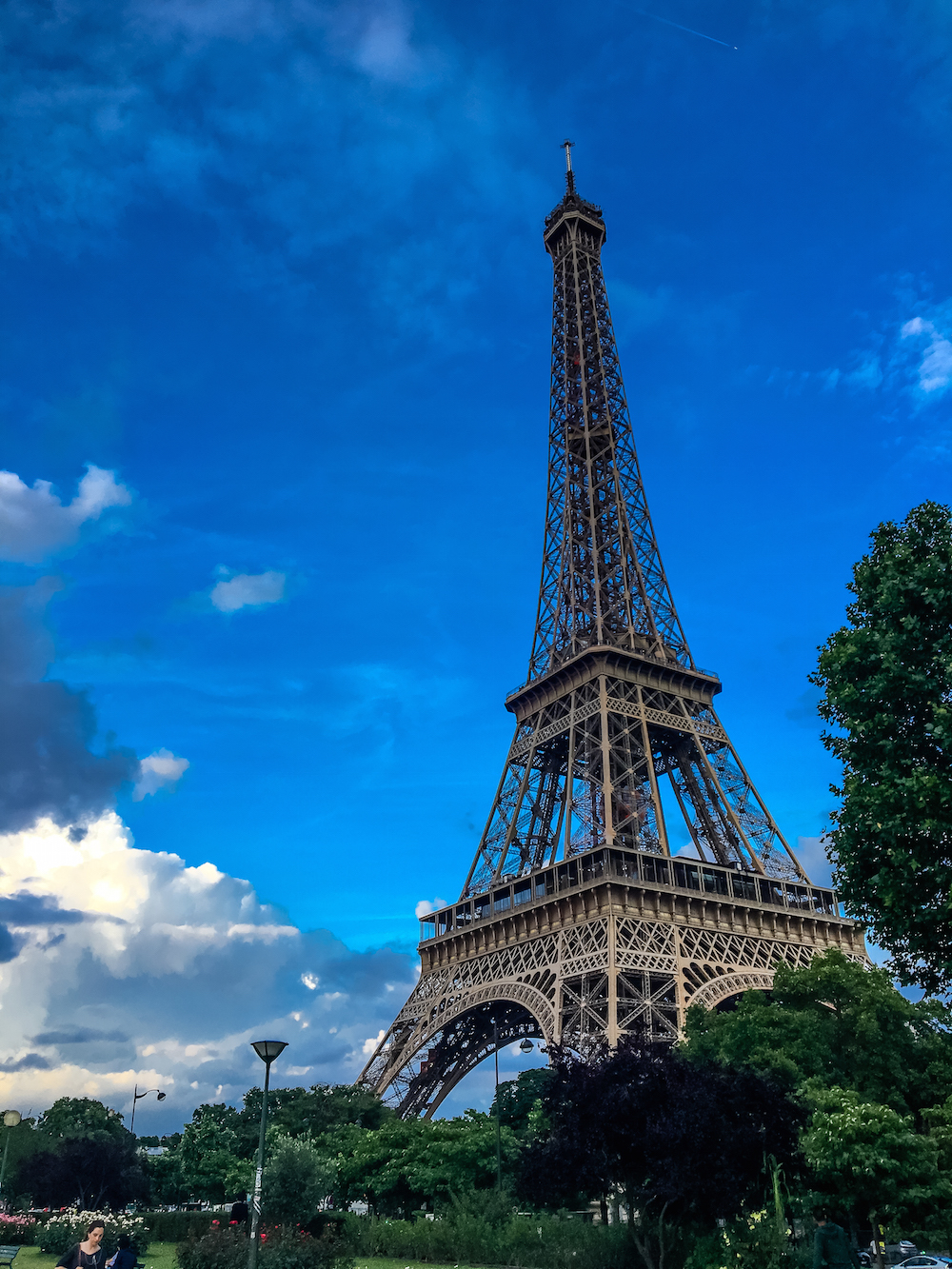 and again just as the night began. This was far more affecting than I thought it would be. Just filled our hearts right up to the brim. 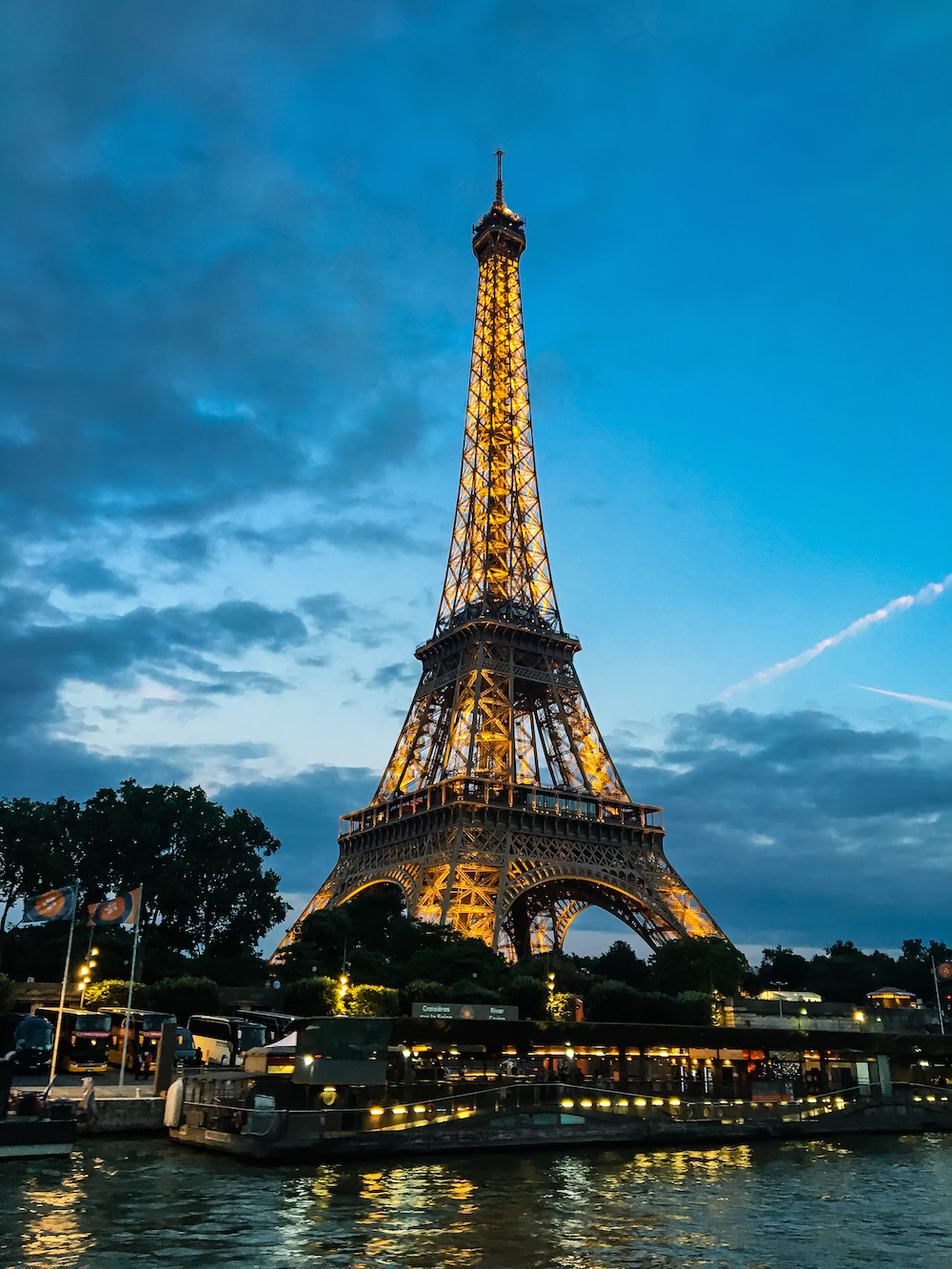 The bridges of Paris are stunning from every angle. 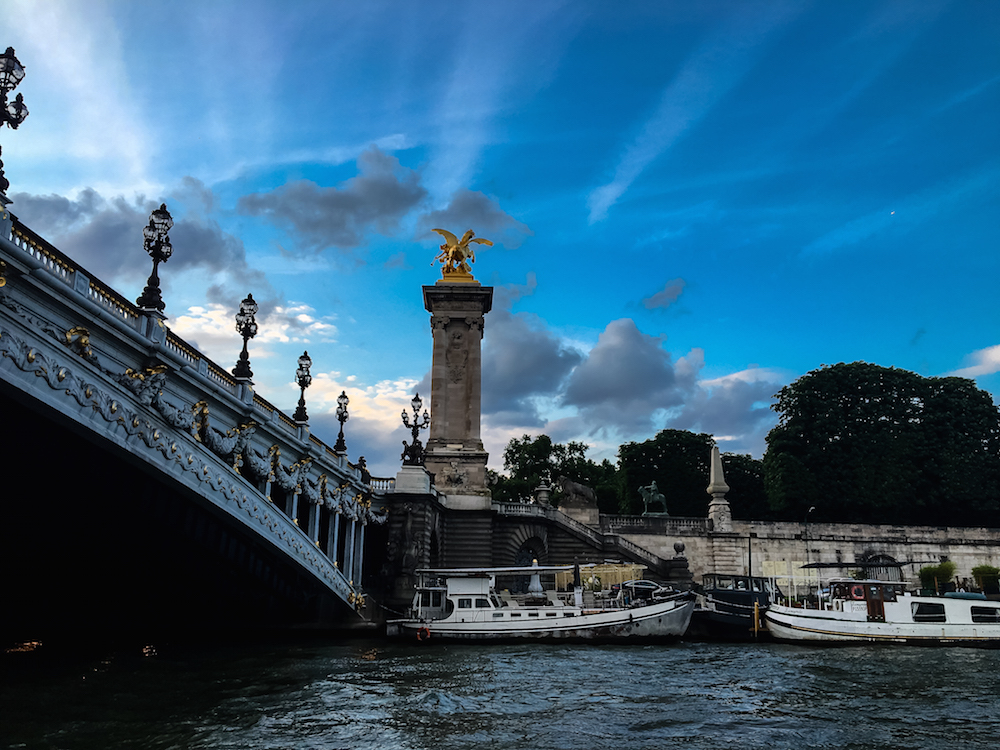 The rain broke for a few minutes and we saw a glorious sunset over the Seine.

We had some crepes from a river-side stand, and took an uber back to the 1st arrondissement where we found a cafe for a late dinner and some more French wine. In the morning, we walked back through the Louvre and across the river to hunt for pastries in the charming neighborhood of St Germain des Pres before taking the metro to the Paris Catacombs. I recommend splurging for skip-the-line passes available from the concierge at most hotels or any tourist office, as the line can be long because very few visitors are allowed in the catacombs at a time. The tickets also come with a self-guided audio tour that adds a lot to the experience. For those who don’t know, the catacombs are ossuaries deep under the streets of Paris, where old mining tunnels were filled with the bones of over 6 million Parisians. They were created when Les Innocents cemetery suffered a collapse due to over crowding. It took two years from 1786-1788 to transfer all of the bones, which were deposited in decoartively-arranged sections detailing where the bones were moved from and when, along with quotes from famous authors and thinkers on the nature of death and dying. It is a truly fascinating experience deep underground in the dark, dank bowels of Paris. It should not be missed, even on a short visit like ours.

From the catacombs, we headed back to our hotel, gathered our belongings, and headed back to Paris Gard du Nord to board the Eurostar back to London. Arrive early for this – it is more like boarding a plane (with security and passport control), and be careful on the escalator. I had a spectacular fall which I am sure is posted on YouTube somewhere. After a visit as packed as this one, you will want to sleep on the 2 hour train back to London, but try to keep your eyes open to enjoy a little of the French countryside as it zooms by.