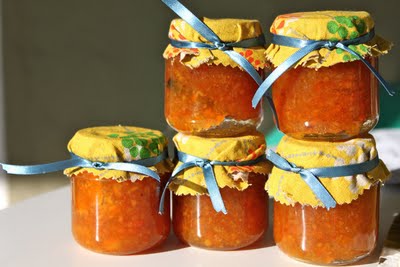 We are so lucky that our new home has a gorgeous, giant tangerine tree and the fruit is just ripening, so get ready for an onslaught of tangerine recipes. Up first is tangerine marmalade.  I guess you aren’t really supposed to use Baby Food Jars for preserves but I feel like that’s all part of the big brother jam & jelly racket keeping us down.  I sterilized the jars and used a technique to seal them (after the jump), but in reality baby food jars are so small you’ll easily use up the contents pretty quickly anyway.  Bring a jar to your holiday dinners and serve with the cheese course, yum! 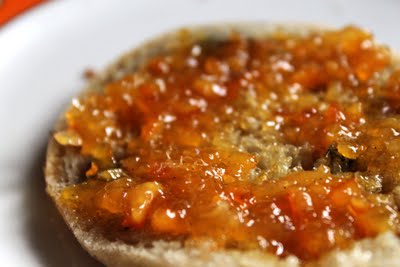 Get the full Tangerine Marmalade Recipe after the jump… 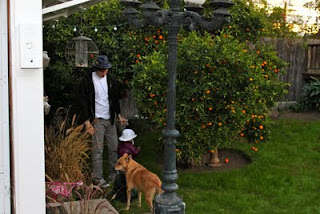 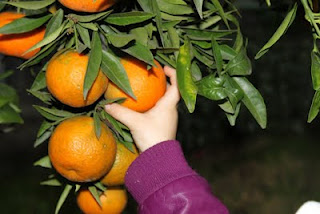 2. Peel tangerines, throw fruit in the food processor, removing as many seeds as possible: 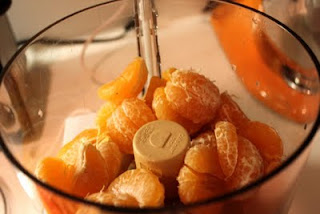 and peels in a bowl: 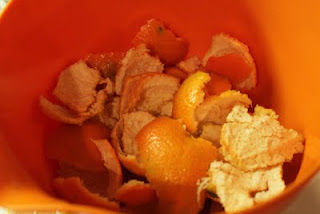 Take about half the peels and toss them in the processor as well.

3.  Process your fruit and peels into a puree: 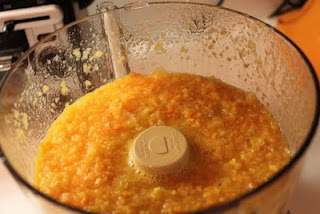 at this point really look closely for any seeds you may have missed.  you don’t want anyone chomping into a seed.

4.  Pour your puree into a measuring cup so you see how much you have.  From the measuring cup, pour it into a non-reactive pot and add one cup of sugar for every cup of puree.

5.  Now take a vanilla bean and slice it down the center: 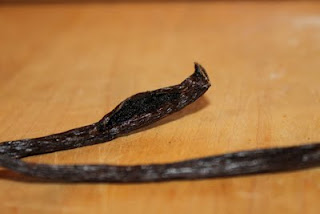 Scrape out all those delicious seeds into your pot. Then cut your vanilla bean into pieces (ideally one piece for every jar you are filling) and throw it in the pot as well.  Vanilla bean is optional, you will have perfectly tasty tangerine marmalade without it.  I don’t know about vanilla extract but it doesn’t sound like it would be as good.

6.  Slowly bring the mixture to a boil: 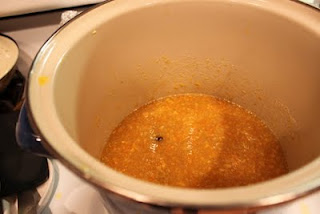 Let it lightly boil (not super boily or you’ll get burned bits at the bottom) for about 45 minutes before checking it with a thermometer.  You need it to reach 220 degrees for your marmalade to get all jelly-like.  If it isn’t there yet, keep boiling until it is, stirring occasionally so it doesn’t get gunky on the bottom: 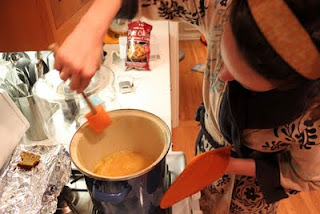 7.  Towards the end of all this boiling, when your marmalade is getting close to 220 degrees, boil your baby food jars and lids in water to sterilize them.  You want them to still be a little hot when you put your marmalade in them: 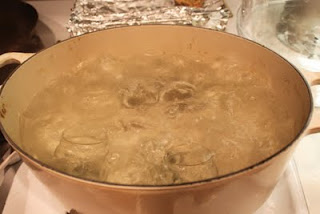 8.  When your marmalade hits 220 degrees it will be thick enough that it glops off your spoon and leaves a shiny coat behind: 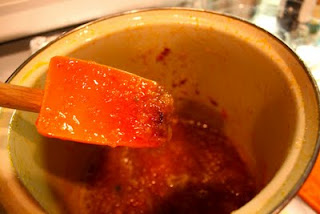 9.  Now scoop some out and pour it into your jar almost to the top.  Try to get a piece of vanilla bean in each jar: 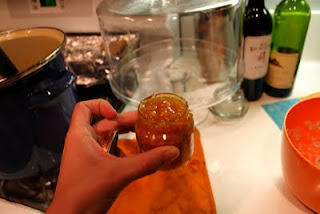 10.  Wipe off the rim of your jar so no marmalade is gunked on there, then screw the lid on as tightly as possible.  Immediately turn the jar upside down and set it down: 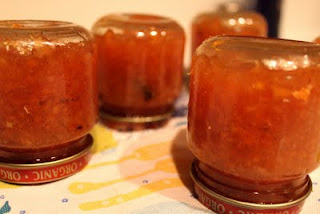 This will cause the marmalade to fill in the cracks and create a nice seal around the lid.  Let it sit upside down for a couple minutes, then turn them all right side up to cool.

11.  Decorate adorably and store in the refrigerator.  Depending on your seal it could be good for a few months, but I recommend using it in the first week just to be sure.  If you use store-bought canning jars you can feel more comfortable saving the marmalade longer.  I just hot glued some fabric circles to the lids’ edges and tied a ribbon around: 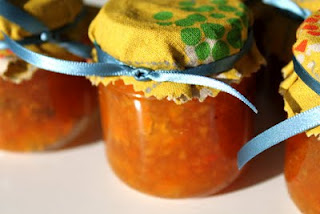 Now spread on toast and enjoy!

Love tangerines and love marmalade therefore love this recipe. Works perfectly in the tiny jars too.

This looks amazing. Yummy marmalade. Cute packaging. You can''t go wrong.
I am so afraid of canning, but you make this seem really doable. These might become Christmas gifts–I could give them out with my lemon bread! Christmas just got tastier!
Thanks,
Greta
Oh, and this is my first time visiting your blog and I really, really like it.

I am so happy i found this link! i have been searching everywhere for information on how to can with baby food jars and this was the perfect place! i am getting married this august and have been saving baby food jars to make my very own homemade apricot jam grown right from our very own backyard to give as wedding favors! i am very happy i found prudent Baby and all its wonderful, useful, and creative ideas!

Thank you for the insight because I just canned a bunch of jelly into baby food jars, but had to use a wax seal. When I boiled the lids about half of them no longer fit the jars for some reason, as if they got bigger. So I came looking for information on what I did wrong with the lids. I’m okay with the wax seal as all of this jelly will be eaten within a few days anyway.