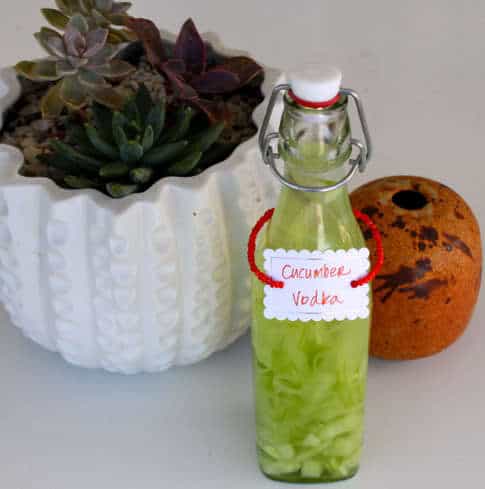 That’s right I said Vodka. Why not? When reader ERIN sent in her Cucumber Popsicle Recipe and suggested a cucumber cocktail, it hit me to make infused vodka. It’s super easy and delightfully refreshing for these last days of summer. 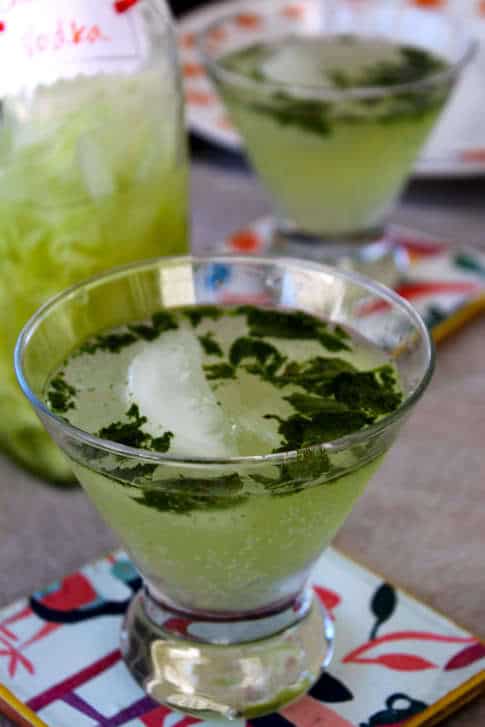 And leave a comment telling us what kind of vodka you’d like to try and you could win the adorable baking cups pictured up there on the left!

How to Make Cucumber Infused Vodka

You’ll need: A cucumber, some vodka, and a bottle: 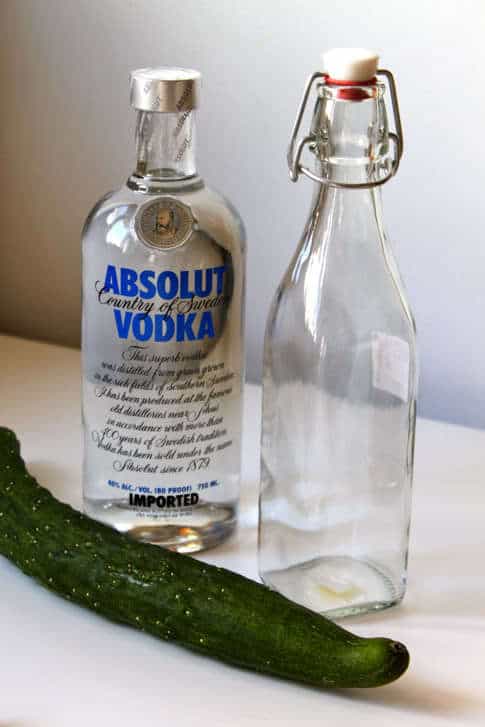 1. Peel the cucumber. Then use your vegetable peeler to make thin strips of cucumber, stopping when you get down to the seeds: 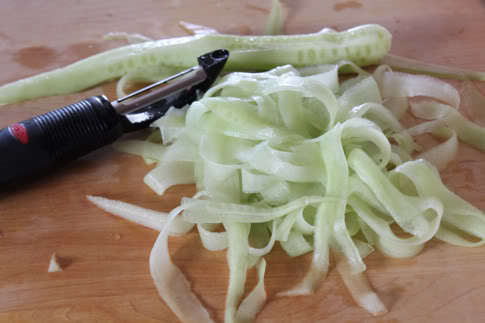 2. Slip the thin strips of cucumber into your bottle: 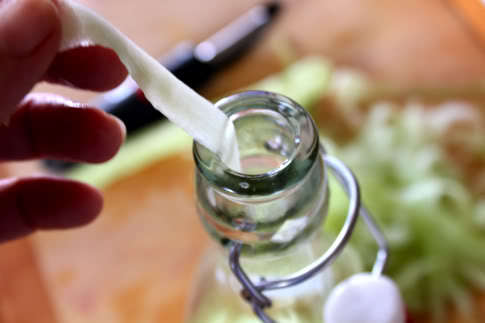 3. Pour the vodka into the bottle on top of the cucumber, then use a chopstick or some other instrument to push the cucumber down and mix it all up: 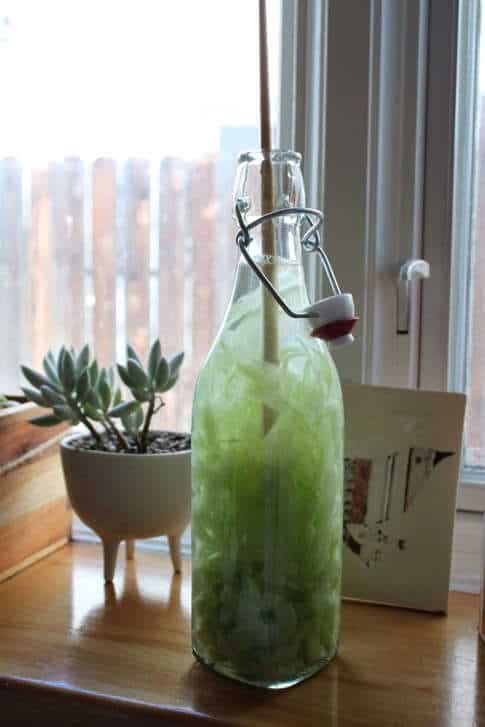 4. Stick it in the fridge and let it sit to infuse for about four days or a week. Then strain the vodka out. I haven’t figured out an efficient way of removing the cucumber from the bottle. You want to either drink all the vodka within a few weeks or remove the cucumber because eventually it will go bad. Not for a while but eventually. Hang a cute label around the neck of the bottle.

For the cocktails, I muddled some fresh mint, added a tablespoon of sugar, two tablespoons of lime juice, and one part cucumber vodka to one part soda water. Deelish!

You can totally do this with pretty much any melon – cantaloupe or honeydew might be good? I think adding a few jalapenos would be awesome for a spicy cocktail. What do you think would be a good one to try? Let us know in the comments and you could win those gorgeous baking cups from Bake it Pretty pictured up there on the left!

Mango mango mango!!!! Can you tell I'd like it with mango?!

I want to try making cinnamon vodka (hmmm, cinammon vodka with apple juice sounds so yummy!), or maybe even candy cane vodka for Christmas – my Christmas spirit in a bottle!

Oooh now your speaking my language! I agree with the other comment, mango would be tasty! I'm quite impressed that you were able to write this post after "quality testing" that recipe! 🙂

What is so funny about this is I got my inspiration for the popsicles from a cucumber martini that was made with cucumber infused vodka.

I made this before and YUM!

You know what is REALLY good but sounds kinda bad? Horseradish Vodka.

I asked my OB if he would be willing write me a note for my husband saying that it was perfectly fine for me to have a beer or glass of wine, especially after the first trimester. After all he had just said so. He laughed. I'm not kidding dude, get out that notepad!

This sounds delish by the way. I love the cucumber water they serve at spas.

That sounds so refreshing, and your P.S. made my day!

I can't think of anything that sounds better than cucumber at the moment, but I'll say watermelon vodka.

I make Jalapeno infused vodka. It's so good for Jalapeno Margaritas, and Bloody Mary's! YUM!

Yum! If you love cucumber with your alcohol (I'm a gin girl myself) you should look at my brothers recipe for his cosmic cucumber on his website http://www.thirstyscientist.com/ look under concoctions… it's delicious!!

Love infused vodka. We've done olive, pomegranate, peach, etc….but the best was the peppercorn vodka. It made the most amazing bloody mary's!

Hmm…I'm not much of a drinker, I do like my occasional girly drinks, but the idea of infusing vodka is just too good to pass up. I know my wino friends would definately be on board with this for our next GNO!

you're hilarious.
p.s. i'm drunk too!

bahahahahahaaaaa! Oh man, how jealous I am right now. You can bet I'll be making this next March (!!!sob!!!!) when I can drink again. I love me some vodka.

Mmmmm! Locally around here they've started making cucumber martinis. YUMMY! They rim the glass with Trechas http://www.trechas.com/index2.php?v=v1 which is a fruit chile powder that has a sweet & sour taste to it. Those drinks are AMAZING, I think I could start making my own with your cucumber vodka recipe! Thank you!!

A local restaurant served these really awesome cucumber martinis with cucumber juice and Absolut Peppar. The glass featured a "salt and pepper rim job." Ha! They must have known I was coming.

I'm going to make this tonight! And then opt for drinking all the vodka. I mean, within a few weeks… of course…

Wowzers! Larry the Cucumber grew up and got down with his bad self!

I like your honesty. I'm going to start signing all my blog posts with "PS I'm drunk."

hmmmm You know what I just think I might want to try your cucumber infused vodka! Is that okay? To pick the one you just wrote about? You make it look super tasty!

This sounds so disgustingly yummy I may have to try it myself!

Oh .. that looks so refreshing! How about a Rosemary infused vodka — I love Rosemary!

I don't know if it would be any good but something with tomatoes that isn't a ceasar. We have tons of fresh tomatoes right now.
Dianne

Beautiful bottle, but terribly impractical for the infusion part of the process. Just use a jar with a WIDE mouth. Once you think the vodka has been sufficiently infused, strain it out, throw the cucumber away, and filter the vodka through a coffee filter. THEN you can put it in your fancy bottle.

I've made a few infused vodkas, and suggest making it in a wide-mouthed glass jar, then once it's infused, strain out the cucumber and put the vodka into a clean bottle. The vodka should keep a lot longer without the cucumber bits in it.

What about basil? Since it doesn't have to be pretty, you could use the stems from basil used for pesto…

What an excellent gift idea also!

A bar in my hometown has a bacon infused burbon… it's actually delicious! they also have a cucumber vodka too. i never thought of doing it at home though! great idea

This sounds delicious! I may have to try it since my garden is producing a plethora of cucumbers!

I made this the weekend after you posted it and made the cocktails for some visiting friends this past weekend and received mad props on the mix master skills! only thing i would do different is make a simple syrup and of course make mine in a larger glass … other wise it was perfect! great idea!

im all about herbs & spices right now so I would do basil with the cucumber, or ginger & starfruit – YUM!!!

There is a little neighborhood bar here in Denver called the Thin Man that serves cucumber vodka with ginger ale. Wow! It is a great, refreshing dring.

I can’t wait to try this! Just a tip: rather than trying to get the cucumber out of the bottle, I’m going to infuse the vodka in a mason jar and then transfer it to another bottle so that it’s easier to remove the solids and reuse the container.