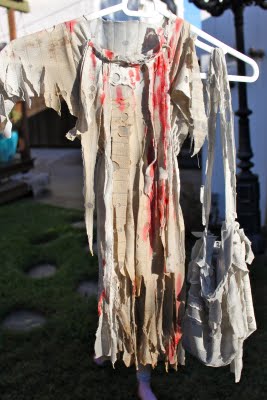 The hubz and I love a good Zombie movie, and with Scarlet being 18 months old we figure this is the last Halloween before we get inundated with princess and fairy costume requests.  So it’s a family of Zombies for us.  I’m sorry but I can’t bring myself to do a big reveal in full makeup until actual Halloween so for now you get to see it in progress. 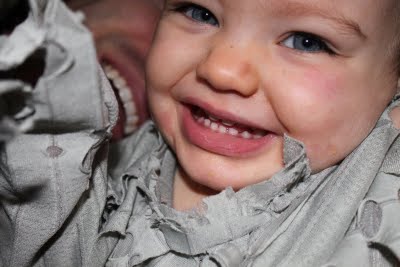 A true zombie becomes undead in regular old clothes which then deteriorate as the former human lies sprawled in the dirt, their brains becoming mush. Then the Zombie’s clothes become further distressed as they hunt the living for delicious brains to eat, spilling blood and brain matter willy-nilly.  So the easiest and most authentic way to do a zombie costume is to take some clothing from your kids closet and just tear it, rip it, roll it in dirt, and pour fake blood on it.  But I like to sew so I went for a custom zombie dress.  The great thing about a Zombie costume is that the quality of your sewing truly does not matter.  The more mistakes, hanging threads and bunched seams the better! 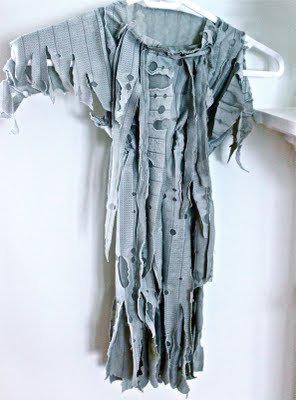 All you need is a yard of zombie-esque fabric and a dress from your child’s closet to gauge fit from, and I used some elastic thread, but that’s definitely not required.
Get the how-to after the jump…

1.  Pre-wash and iron your fabric.  I used a yard of crazy mummy fabric I found on sale at JoAnn fabrics.  Grab a dress that fits your girl well and lay it on your fabric, use it as a guide to cut two rectangles of fabric the approximate same size. 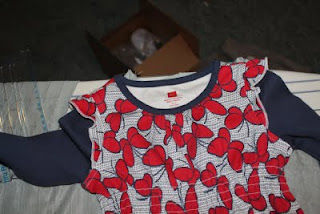 2.  Pin your two rectangles together right sides facing and sew them up each side. 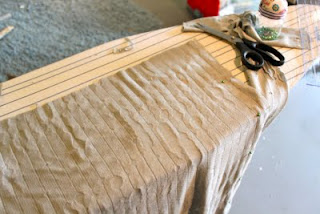 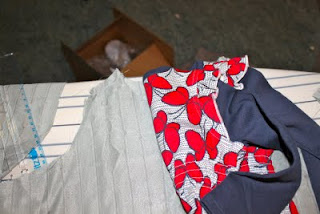 4. To create little shredded sleeves, cut a triangle of fabric: 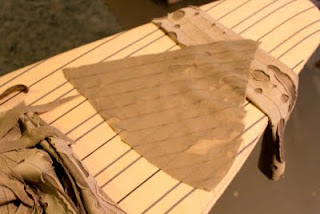 Leave your dress inside-out, fold the triangle sleeve in half with the right sides out, and slide it into the armhole of your dress, then sew them together around the armhole. 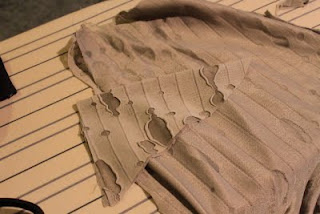 then turn your dress inside out and shred the sleeves up a little:

5. At this point you have a basic sack dress.  Zombies are wearing regular clothes when they stop being human, so I wanted her dress to look more like a regular dress that became disheveled, so I wanted to give it a waist.  I used elastic thread to do that.  If you have never used it before this is a great project to try it on because if it looks messed up, all the better for a ragged zombie feel.  Wind your bobbin by hand putting just a bit of tension on the elastic thread.  Use regular thread on top (on the spool) and sew a straight stitch in a circle around the dress at about empire waist height.  Do this a few more times, you don’t have to cut the threads in between rows, you can just scoot your fabric over. 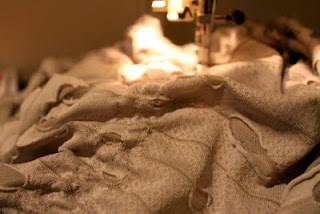 I did five rows of elastic thread and ended up with this.  You could also just use a piece of fabric as a belt or leave it waist-less: 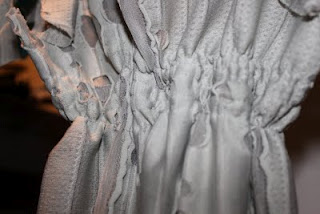 6. To create hanging zombie shreds I took a bunch of fabric scraps and pinned them to a strip then sewed them on.  You can then sew that strip to the neckline of the dress: 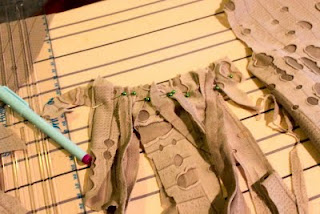 7. To keep little arms warm on Halloween evening I made some arm-warmers.  Use your guide dress to estimate the size of her arms and cut two rectangles: 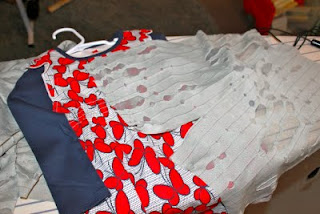 Then fold each in half, right sides facing, and sew the long way.  Turn them inside out to get these tubes: 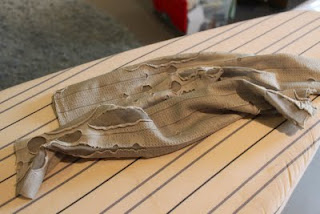 Use scissors to shred the ends for a ragged zombie effect: 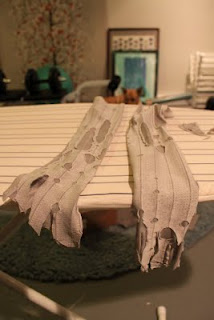 8. My zombie needs a place to store her candy so I made this bag using the same gusseting technique from the lunch bags, and adding lots of fabric scraps and a shoulder strap.  Just sew it all on messily, the more hanging threads the better: 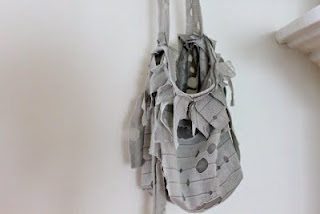 9.  Now you’ll want to dirty it up and give it true zombie character.  Place the whole mess in a plastic grocery bag with some dirt and rocks from the garden and shake it up.  Then pour coffee on it to give it that stained un-dead look: 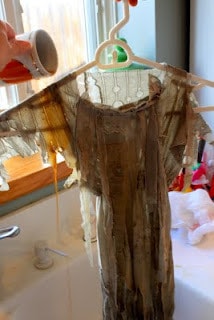 10.  Then hang the dress on a hanger over a towel and drop some fake blood on it.  You can make some with corn syrup and red and blue food coloring (just a drop or two of blue or you’ll have purple blood), but I don’t want S to be wearing corn syrup so I’m going to use store-bought fake blood: 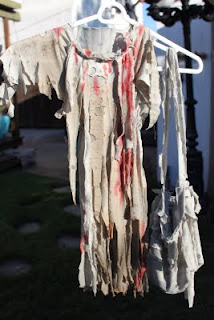 11. Any extra fabric can be tied around the shoulders as a shawl or shredded for more zombie goodness.  Maybe some sewn to socks to look like ragged old socks or to cover boots.  A little white makeup with black under the eyes and a few drops of green or red around the mouth to indicate brains have/will be eaten, and you’re set.  Check back on Halloween for the full effect pictures in all their glory.
Now, I realize not everyone thinks babies and zombies are a great combo, what with the blood and the brain-eating, but it’s all in good fun!

This is so cool!!!! I love all the shreddy layers! I posted a link to your tutorial on Craft Gossip Sewing:
http://sewing.craftgossip.com/tutorial-zombie-costume/2009/10/16/

I can not wait to see pictures of the whole family in their zombie costumes!

I would pay you to make one of these for me!

I love this fabric!! Please tell me where you got it!!

You did a great job. What a cool lil costume 🙂