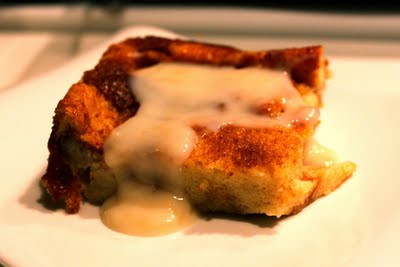 Who needs pumpkin pie when you’ve already devoured a whole savory stuffed pumpkin?  Bread pudding is super-easy, inexpensive and with my simple sauce it’s extra fancy delicious too!  Get the recipe after the jump…
1.  Cube some white bread.  Crusty french breads don’t work as well.  Your bread doesn’t have to be stale but it can be.  You want about eight cups of bread which is about half a loaf: 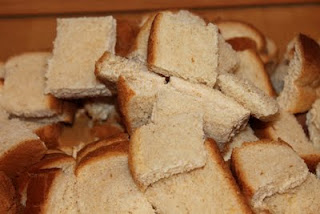 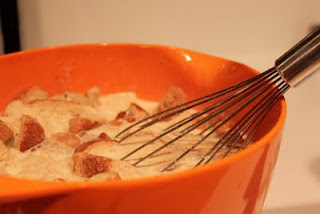 3.  Pre-heat your oven to 325 and butter your baking dish.  After your bread has been soaking for twenty minutes pour the whole mixture into the dish, then take the other two cups of bread cubes and put them on top.  Gently press them into the mixture but leave the tops of the bread cubes dry.  Use a brush to brush them with melted butter (about 1.5 tablespoons) then dust with cinnamon sugar (cinnamon sugar is about 2 tablespoons of sugar and 1/2 teaspoon of cinnamon): 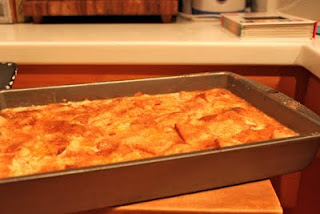 4.  Bake in the 325 degree oven for about 45 minutes.  You’ll know it’s done when the sides are all puffy and the center is still a little jiggly: 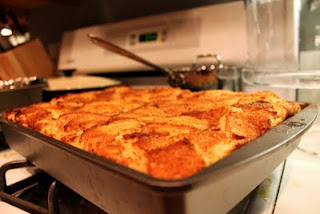 Now resist the temptation to eat it right away because it needs to set for about 45 minutes.
5.  A few minutes before it’s time to eat it make the sauce.  Throw all these ingredients into your pot:
1 cup milk
2 tablespoons butter
1/2 cup sugar
1 teaspoon vanilla
1 tablespoons of flour
1/8 tea salt 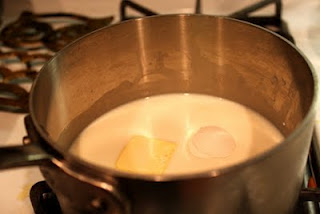 6.  Boil for five minutes or so until it gets all puffy-fluffy: 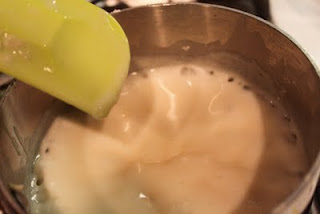 7.  See that your bread pudding has set.  Admire that crispy cinnamon-y crust: 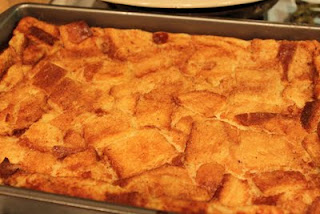 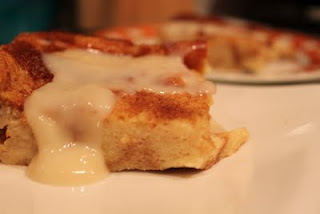 Season of Cozy perfection! I seriously just keep coming back to look at the picture. So delicious looking! seriously.

i made this yesterday!! and put it in the fridge for today!! it looks so good i cant wait for dinner!!

I’d love this for a delicious breakfast as well!