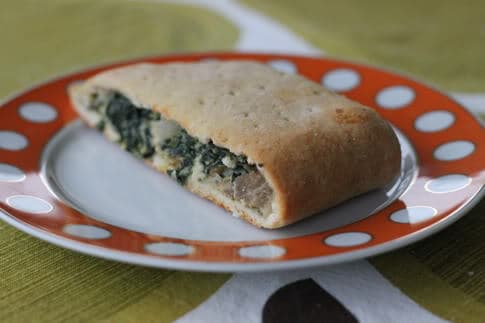 This may seem rather random, but it has taunted me year after year… what to make with leftover creamed spinach from holiday meals? I make this old-fashioned, heavy, deliciously decadent creamed spinach for every holiday meal on demand of my family (get the recipe here: Creamed Spinach with Bacon and Onions), and then freeze the leftovers. If you did the same, you might be excited to try this little leftover creamed spinach recipe creation I invented, it was a total hit here. You may not believe what I am about to tell you, but I swear it is true: My two year old ate spinach! I speak the truth! Worth a shot, right? 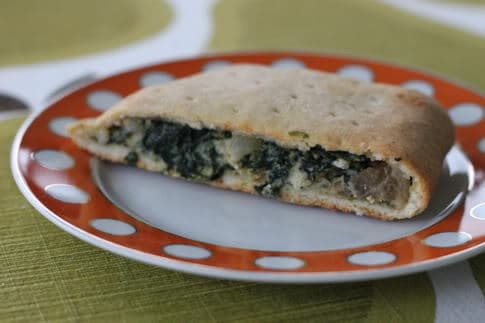 Also, you can make this dough and stuff it with anything, I also do it with leftover meatballs and cheese for a calzone effect. Get the Homemade Hot Pockets: Leftover Creamed Spinach Recipe after the jump…

And please, share with us in the comments, what do you make with leftover creamed spinach? You could win some pom pom trim!

Defrost your creamed spinach, or go ahead and make some with our recipe: Creamed Spinach with Bacon and Onions. In a bowl, mix the spinach with two eggs and add some cheese, I used gruyere but you pick whatcha like.

Separately we will make a dough.  It’s basically a hot pocket you’re making, it isn’t anything fancy.  So mix the following ingredients in a bowl or a mixer until the dough forms:
1 cup all purpose flour
1/3 cup milk
2 tbls vegetable oil
1 tea salt

Remove to a floured surface (I have to plug my parmesan-shaker flour dispenser here) and gather into a ball. Knead 10-12 times, then set in a bowl and cover with a damp towel.  Let sit for 15 minutes.

Preheat the oven to 425. Roll the dough out to into an approximate 12″ circle and place on a greased baking sheet (or even better, on a silpat

). Spoon the spinach mixture onto one half of the circle, then fold the dough over the filling.  Pinch the edges together and prick the top of the dough with a fork several times to let steam escape and prevent explosions.  Bake for about 20 minutes or until the dough turns a light golden brown.  Let cool for a couple minutes, then serve to unsuspecting child with name like “power pocket of coolness.”
Yum!

I use it as Spinach Dip the next day with chips!

Genius! Now we can have quick meal in the freezer without everyone feeling like death after eating real hot pockets!

Oh, I need to try a modified version of this. Yum.

I've always used left over cooked spinach in an omelet. I imagine that could work for creamed spinach too.

This is genius. I swear, you ladies are amazing and I need friends like you on my team 🙂 Y'all can do anything! Thank you for these amazing ideas and I'm honestly obsessed with your website. I've been reading every post while my daughter naps…you ladies are like old friends I feel lol
Keep it up, you have a loyal reader in me!