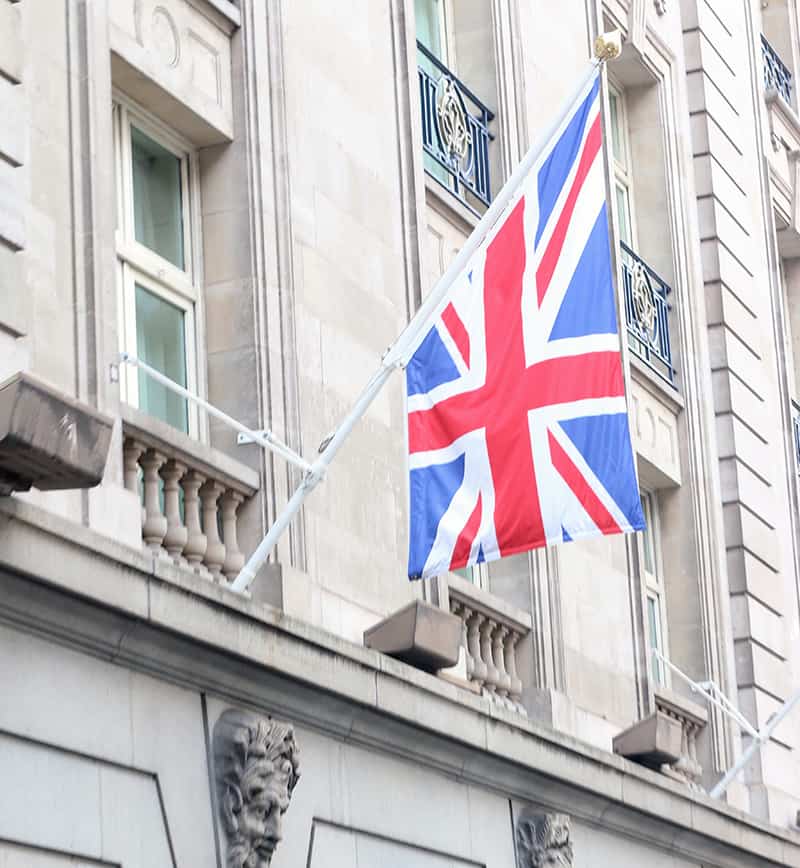 I just returned from my first trip to London and Paris and while I’m no expert on these amazing cities I feel like I’ve come up with the Perfect London 3 Day Itinerary which left me feeling fulfilled and yet not exhausted. Indulge me while I share a little about my trip which included a little sight seeing, a little shopping, a little hanging in cozy pubs and a dash of theatrics.

If you are planning a trip to London this year (and you really should) I hope this Perfect London 3 Day Itinerary gives you some ideas for your own trip. Since I traveled in January, some of my activities are geared towards winter in London, which basically just means more mulled wine, more trips on the underground (vs walking) and shorter lines at the tourist attractions, so basically a win-win-win. 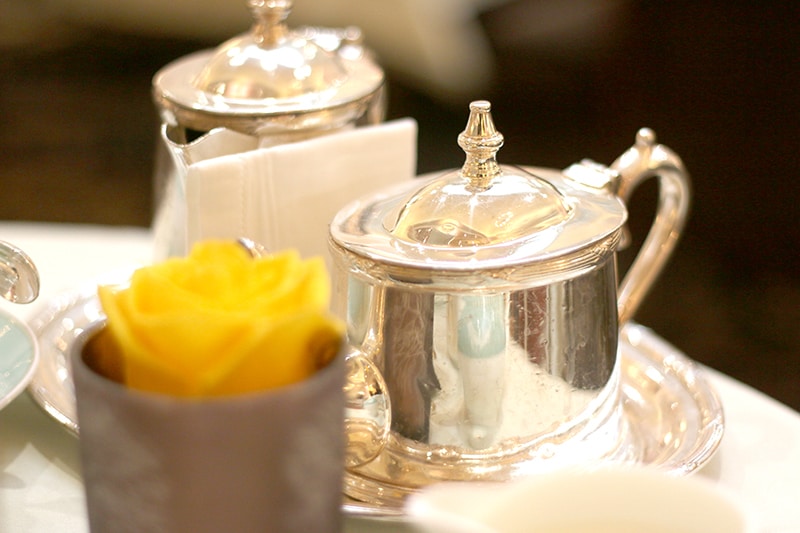 We arrived at Heathrow early on a Friday morning on a nonstop flight from Dallas. Despite having the worst seats on the plane and not sleeping a wink, I was feeling ready for adventure so we hopped on the underground for an uneventful ride into the city which is the best bargain around at under $2 per person. 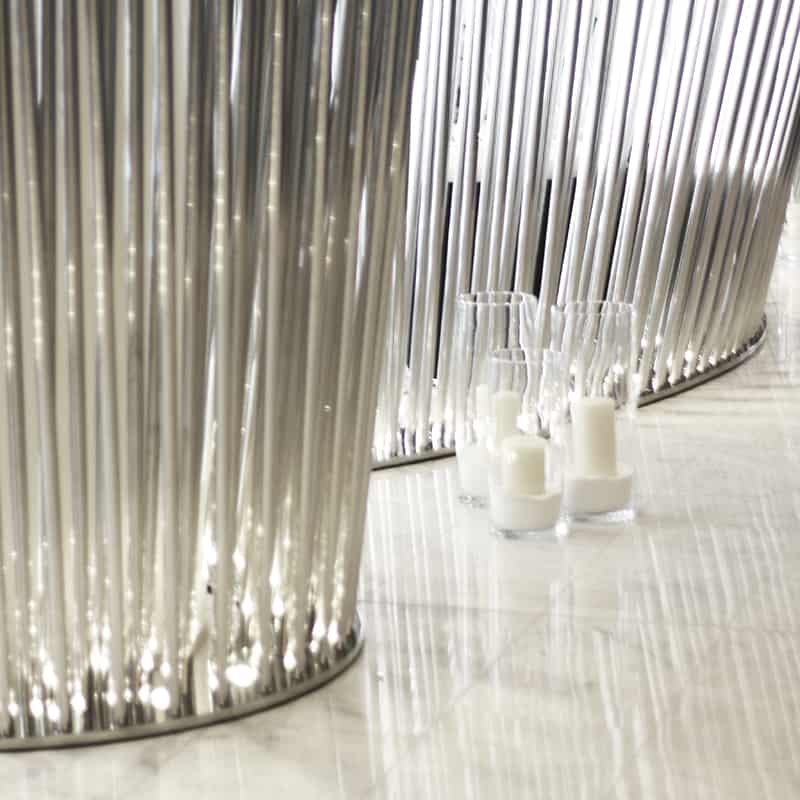 We checked into the chic ME London hotel, which is quite modern and glamorous, with high tech touches in the room like touch screen lighting control which were very cool but had a learning curve. Really all you have to do is hand me a cold glass of Prosecco at check-in and I will think you are pretty awesome. Conveniently located about a 5 minute walk from the Temple underground stop and Covent Gardens, with an amazing rooftop view of the Thames and The City skyline, it’s a fantastic option to consider assuming you can turn on the light in the bathroom. Text me if you can’t, I finally figured it out. 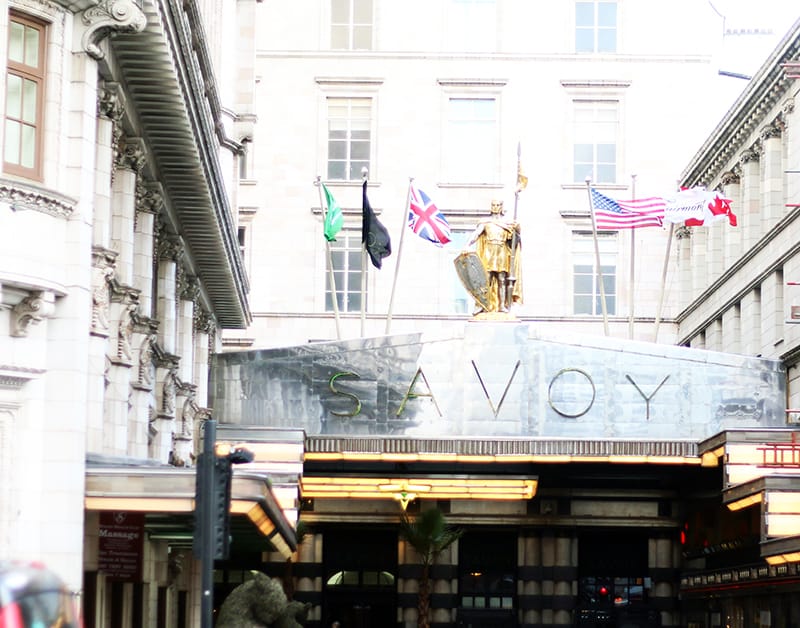 After settling in, I splashed some water on my face, put on some proper clothing and ventured out for my tea-for-one reservation at The Savoy. I had read a helpful Washington Post article on the best places to have tea-for-one in London and wasn’t going to let my lack of a willing cohort stop me from this essential English experience. While the foyer of The Savoy is a classically elegant scene, I found the staff helpful, friendly, and warm. They made me feel at home, explained the experience in a welcoming way and encouraged me to eat MORE, MORE, MORE. Everything I tasted was exquisite from the finger sandwiches, the tea, the scones, the pastries, and even the lemon curd. It was all divine and had a pricetag to match. This is definitely a special occasion type of experience but one of my highlights of the trip. 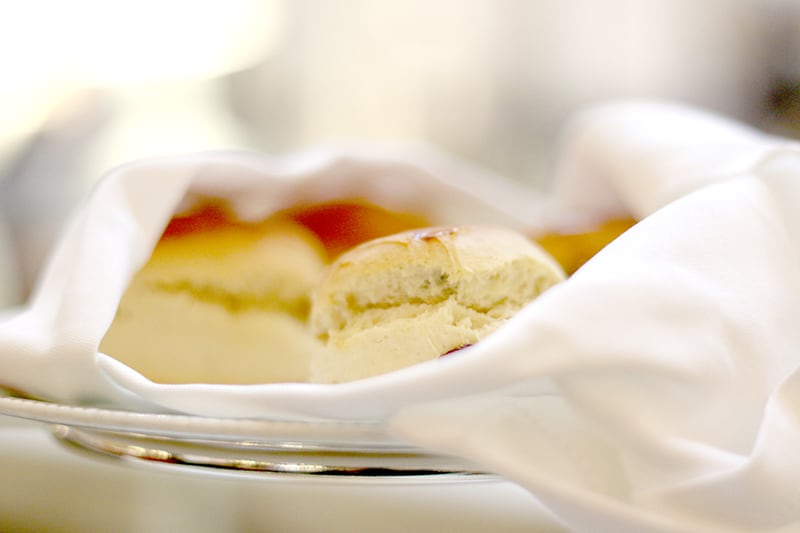 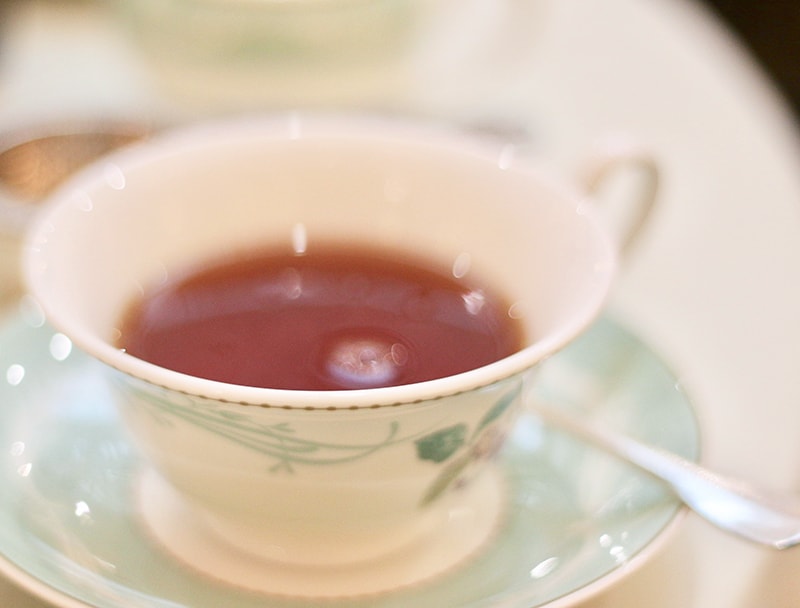 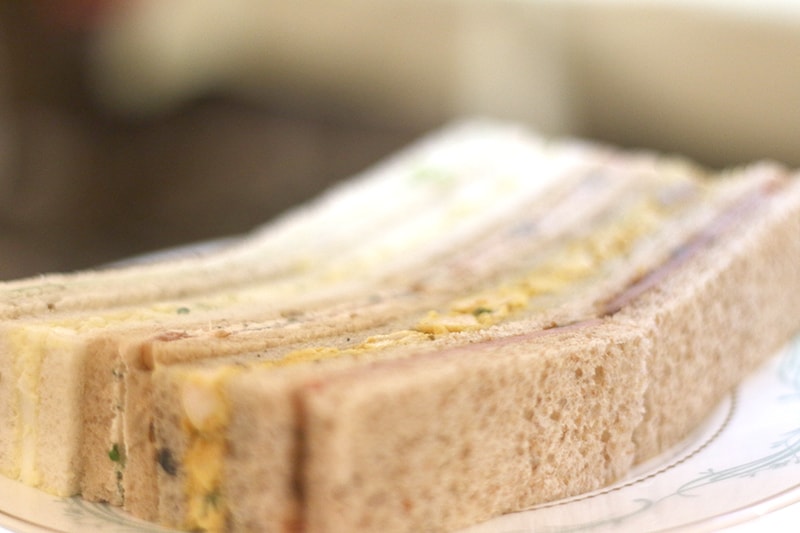 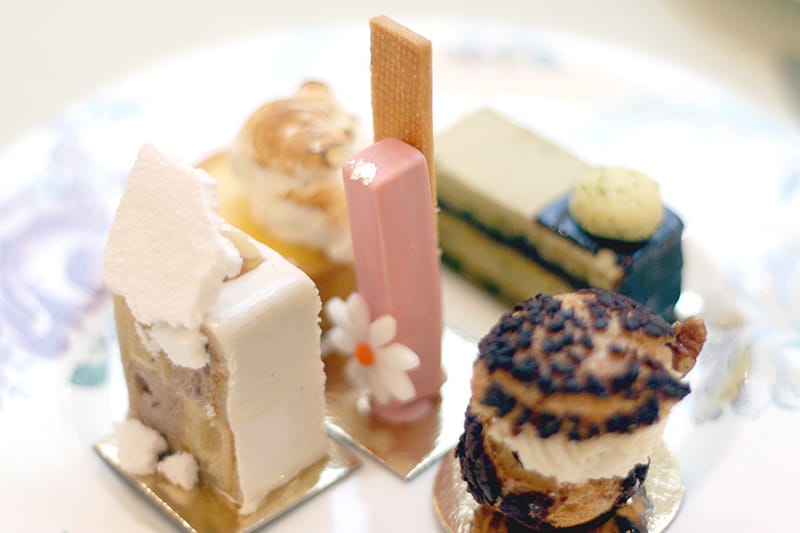 After tea, I wondered back through Covent Garden to the hotel, admiring the store windows, the theaters and the architecture and participating in some solid people watching. The crowds seemed to still be bustling in some post holiday glow. 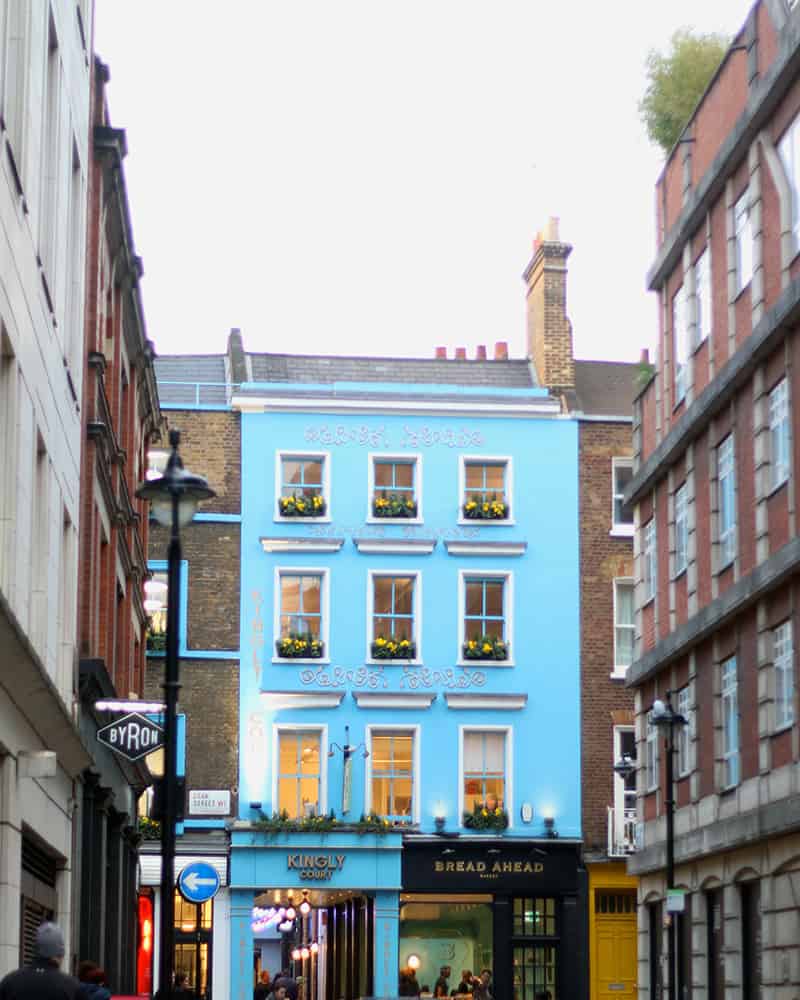 First on my husband’s to-do list was a trip to Wagamama, a casual asian chain restaurant featuring flavorful noodle, rice and soup dishes along with savory veggie dishes, appetizers and fresh squeezed juices. We met up with friends and tried that for our first dinner in London. And by “first dinner” I mean our first of two that night, apparently we are hobbits. It was the perfect choice on a cold winter night and we would be back for more over our three day trip.

After “first dinner” we took a stroll over the bridge and admired the city lights at night. We got a glimpse of The London Eye, Westminster Abbey, Big Ben and other famous tourist attractions and I tried my first mulled wine of the trip. This really gave me the opportunity to think about my boyfriend Matt Smith and the new ways he would infuriate me and delight me in his portrayal of Prince Philip in the next episode of The Crown. 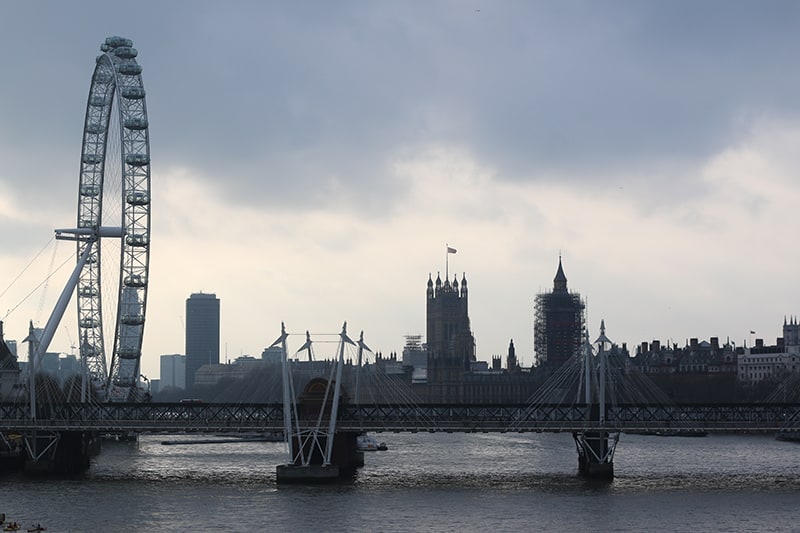 From there we ventured to “second dinner” and my favorite meal of the trip which happens to say a lot because from London we traveled to Paris for 4 days. Dinner at The Palomar in SOHO was a culinary experience, serving the food of modern day Jerusalem. We sat at the kitchen bar overlooking the busy chefs preparing plates of perfectly seasoned scallops, rich mushroom and truffle polenta and possibly the best bread I have tasted, served with an assortment of scrumptious middle eastern dips. Grace Dent from the Evening Standard described it as “Death row-dinner good” and I tend to agree.

This second morning I was on my own for some sightseeing. I initially thought that a double decker bus tour was too touristy for my tastes but some well-traveled friends convinced me that it was a great way to see a lot of the city in a short amount of time. I pre-purchased my 24 hour pass online in a package deal with admission to the Tower of London and caught the yellow line bus in Trafalgar Square. 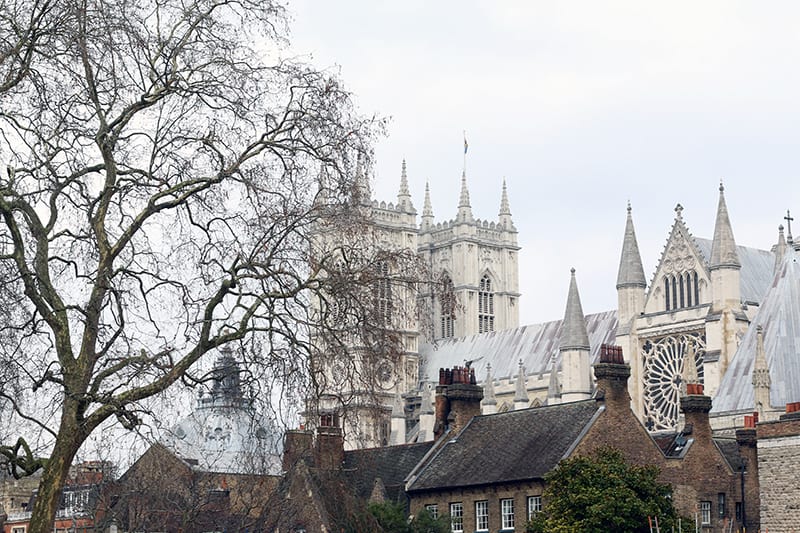 I rode the bus all over the city taking in the sites and listening to the excellent audio tour that you can plug into in each seat. Most people where hopping on and off of the bus but I was happy to see most sites as we traveled by. After about two hours of touring, I hopped off at the Tower of London and beelined for the Beefeater Tour meeting spot. 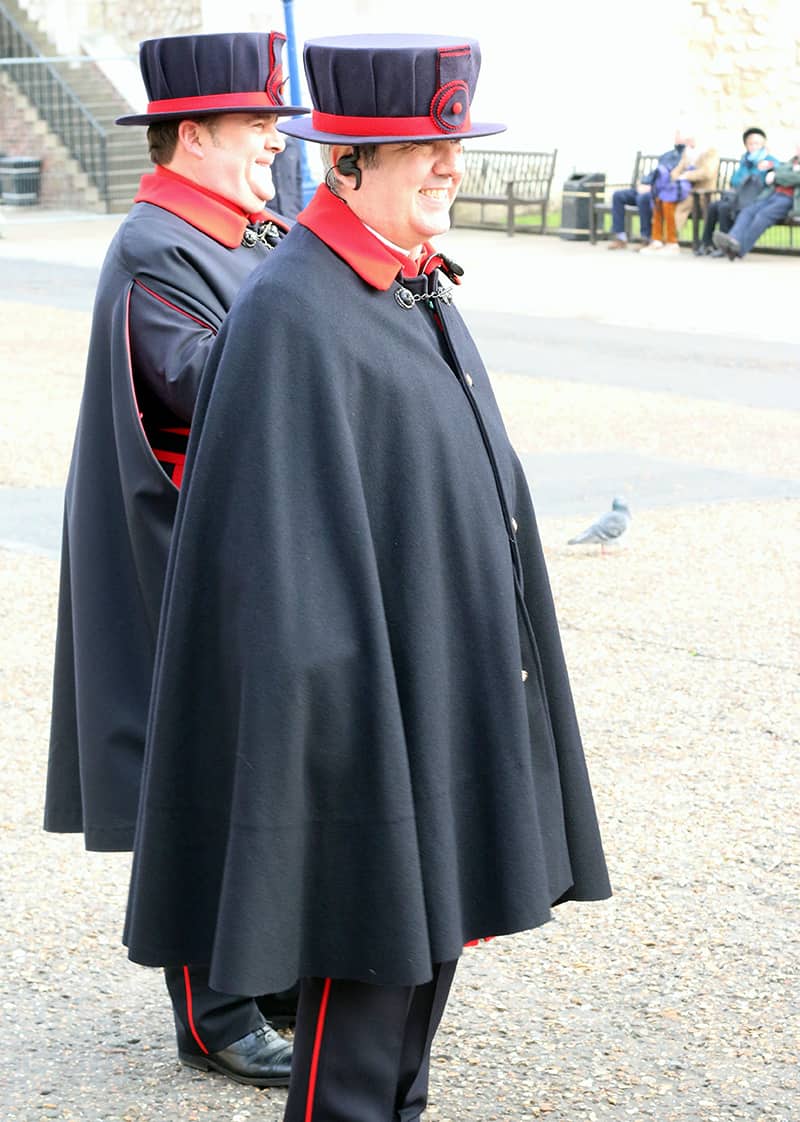 These tours of the Tower of London are lead by the Yeomen Warders, retired members of the Armed Forces with at least 22 years of service. I don’t know if a great sense of humor is also required but the Yeomen Warders are known for giving informative and hilarious tours of the Tower of London in addition to their responsibilities of looking after any prisoners in the Tower and safeguarding the British crown jewels; since the Victorian era. I highly recommend making the Beefeater tour a priority. It requires no extra ticket or reservation, just wait at the meeting spot just past the ticket booth.

For lunch I checked a box off of my London bucket list and picked up some fish and chips, “more malt vinegar, please” and made my way back to my people on the bus. We had tickets to the Nottingham vs Everton Football (soccer) game at Wembley Stadium. So sportish right? Even if you are indifferent to sports, an English Football game is a fun, lively experience. I was happy to tag along with the guys and indulge in some excellent food truck treats along the way. As an added bonus, you will likely learn some new colorful language in the cue. The English really take swearing to art form level.

After the football match we took the ever handy underground back to town and the nearest pub. A few of our favorites were The Iron Duke, Cock and Lion Tavern, and The Henry Holland, all in Mayfair. They all have a fun atmosphere, good beer, and fun people willing to strike up a conversation with over-friendly Americans. I hear they also have good food but we were always too late for that. They close early. We would venture out to the nearest falafel stand for our late night grub, which was always delish. 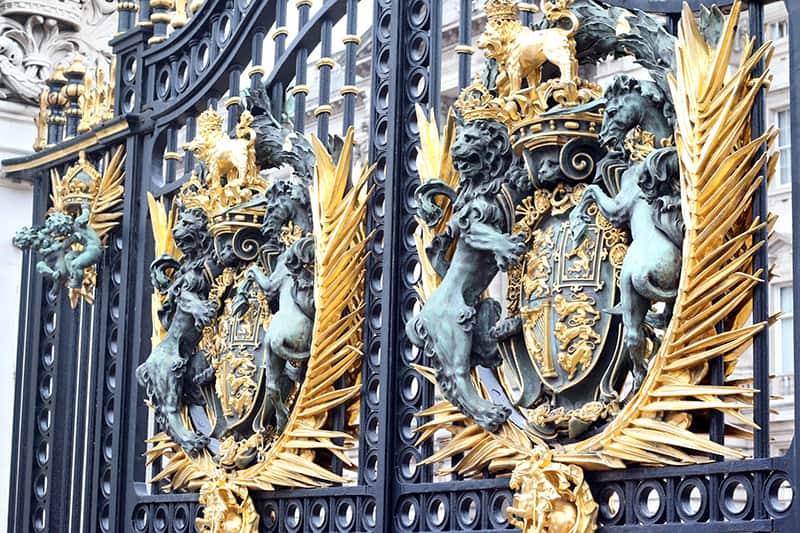 On my third day, I was on my own while the guys made a football pilgrimage to Liverpool. I started as usual with a cappuccino at the hotel bar and then made my way via the underground to Buckingham Palace for the changing of the guard. This was the spot where I found the most tourists but it was still manageable and enjoyable. The changing of the guard starts at 11 am but if you arrive around 10 you can get a decent spot for enjoying the pomp and circumstance depending on your height. Remember this is January so the crowds are likely smaller than Summer. It seems that the best spot to catch a glimpse is the left side of the gate, facing the palace. From my spot on the right, I could see a little bit and hear the band. 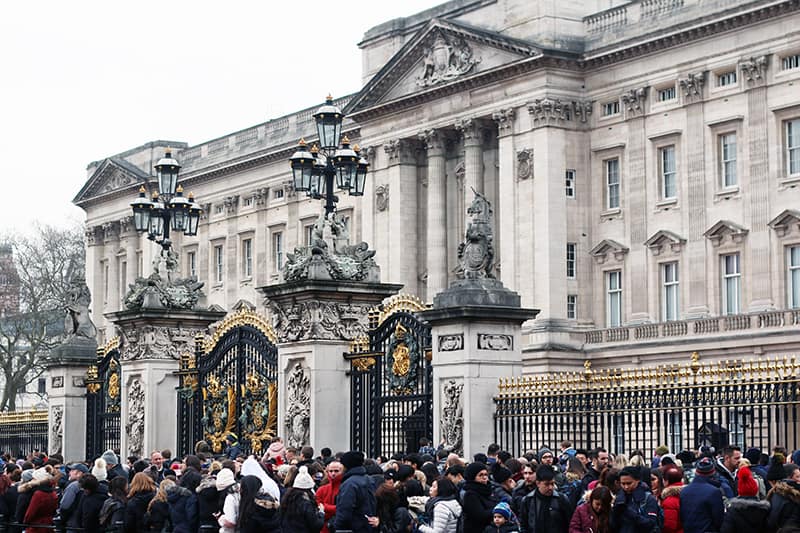 From Buckingham Palace I walked through St James park and made my way through SOHO on my own pilgrimage to Liberty of London. As a long time fan of Liberty’s beautiful fabric patterns, I was excited to see them in person. Now is when I admit that I had no idea that Liberty of London was an enormous 6 story department store. I literally thought I was going to a fabric store. HAHA, I’m dumb. 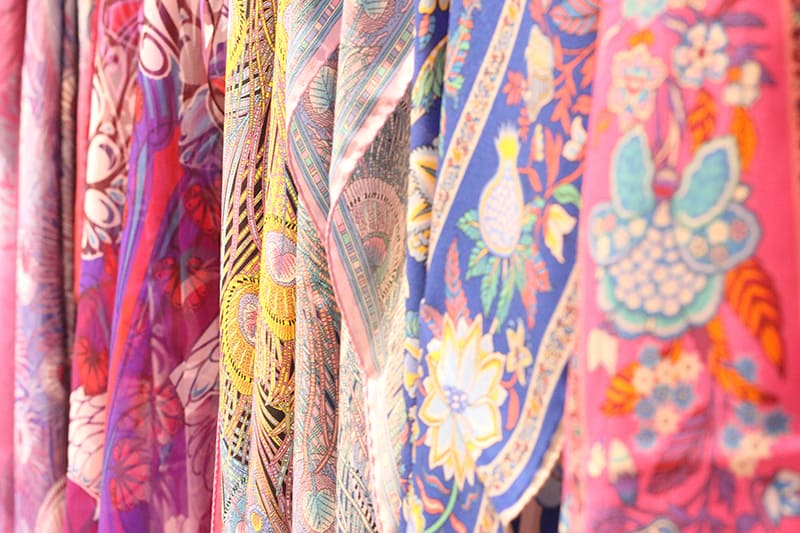 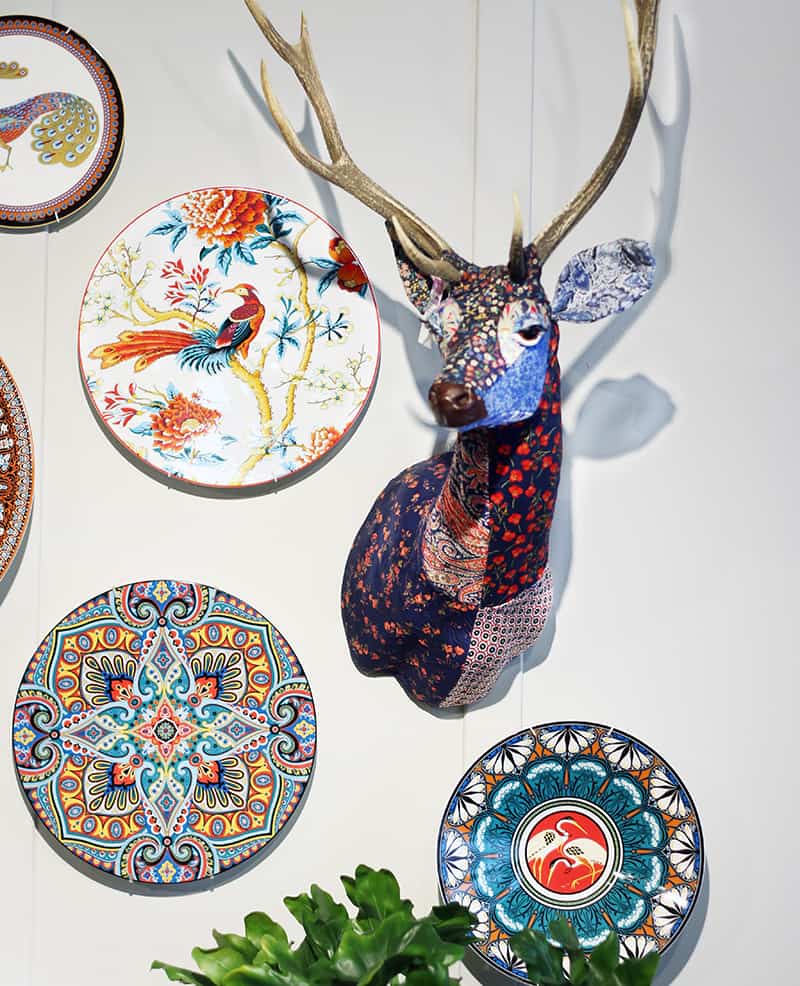 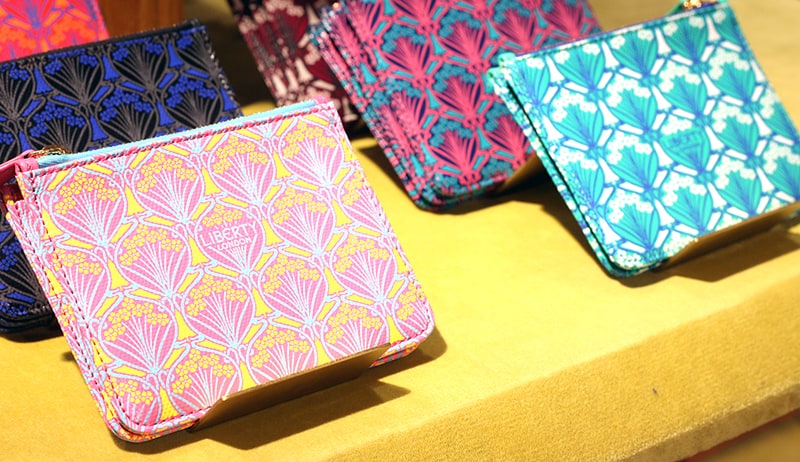 I spent HOURS here, petting all the things. Also, based on a hot tip from Jaime, I treated myself to a second afternoon tea in their cafe which is the cutest, pinkest place around. It was a much more casual experience than The Savoy but beautiful and delicious just the same. I found myself noticing that the edges of their finger sandwiches were not quite as straight, which I guess basically makes me an afternoon tea snob now. It was awesome, go there. Maybe try their Eggs Benedict, which looked AMAZING. Let me know. 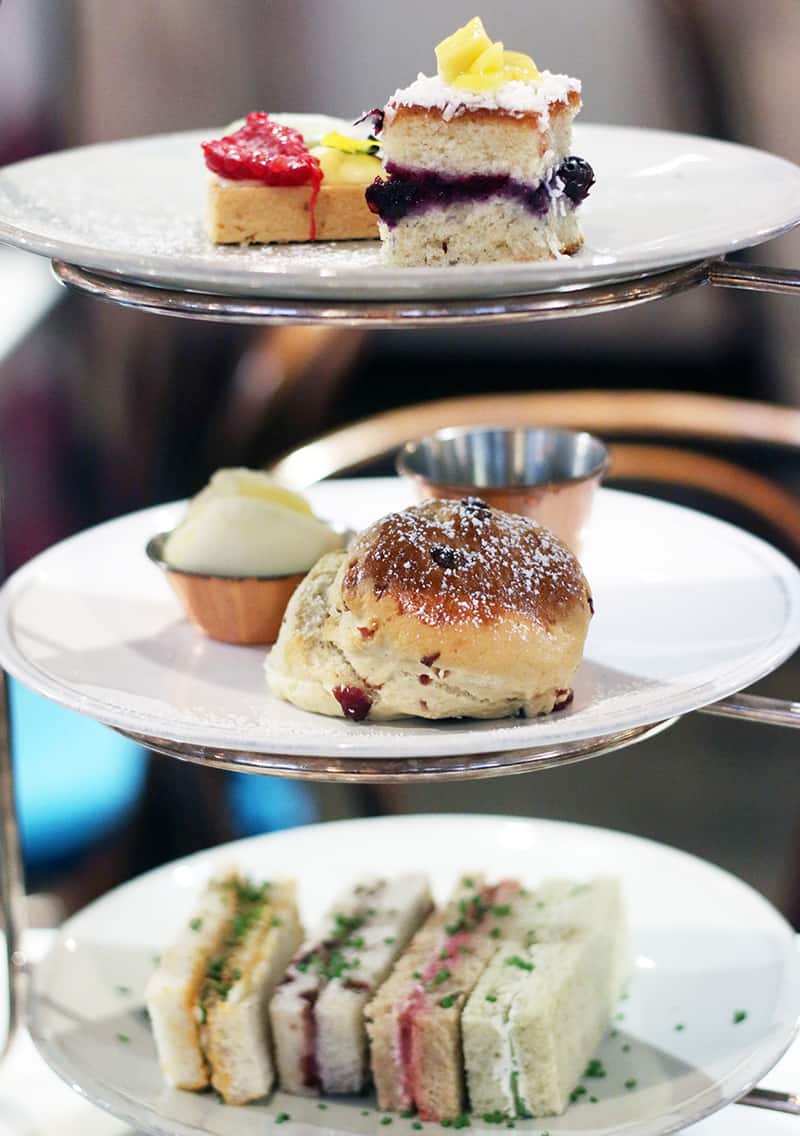 So basically I was there so long that the sun was going down when I left Liberty. I was on a mission to grab a single same-day theater ticket for a steal. Surprise! Most of the theaters in London have Sunday off. Well, that was bad planning. I dipped into The National Gallery in Trafalgar Square to whet my whistle for all the art I was going to see in a few days in Paris. The collection of  impressionist masterpieces was inspiring and there is something so peaceful about a museum at night. It’s my favorite time to go. 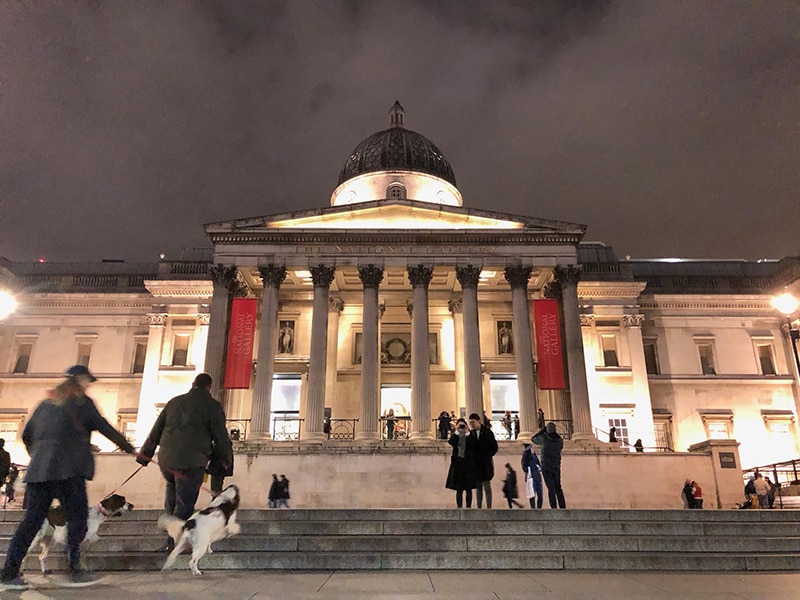 Leaving the museum, I ducked into a nearby pub to treat myself to Sunday Roast which is basically Prime Rib with all the English fixin’s and is also known in my case as “First Dinner.” Mine was touristy and mediocre but had I planned better, I would have gotten into BlackLock in Soho, for what Ben Norum from Evening Standard calls ” a whopping sharing plate of beef, lamb, pork and all the trimmings…up there with London’s very, very best.” Make your reservation here a few weeks in advance.

While I was eating my dinner for one, I took one last look at the theater listings, not truly believing that every show I wanted to see could be closed on Sunday, and noticed an improve show called Mischief Movie Night with good reviews that had a show scheduled. While Improv wouldn’t be my first choice, I adore “British humor” and decided it might be funny. It was great and I got a single seat in the second row. Success! The following week, on our way back through London from Paris, we got the chance to catch Wicked, which was spectacular!

I wasn’t planning on Second Dinner but I randomly passed by Jamie Oliver’s Jamie’s Italian Covent Garden and couldn’t resist sampling a few dishes. I have been a huge Jaime Oliver fan since back in the Naked Chef days and I especially love his Italian cookbook.  With my belly double full of divine bruschetta and pasta, I strolled back to the hotel for one last sleep before we caught the Eurostar to Paris! I hope that you enjoyed my Perfect London 3 Day Itinerary. Let us know if you have any questions about your own travel plans to London! 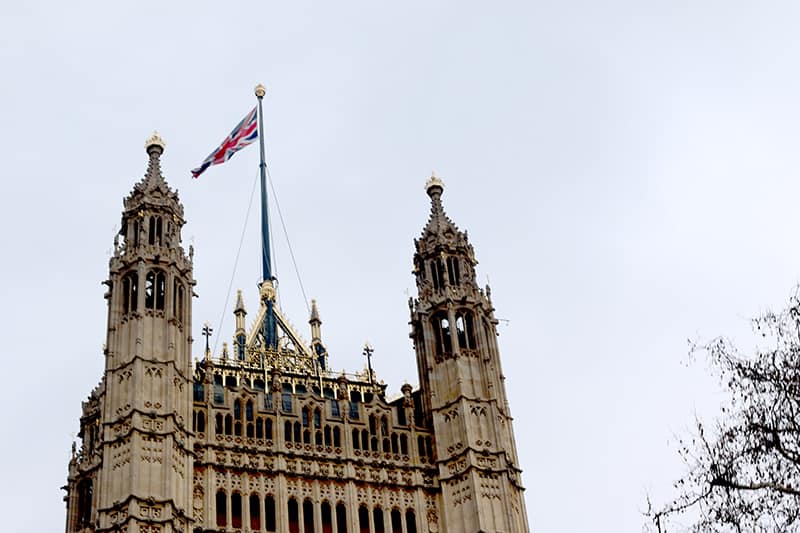 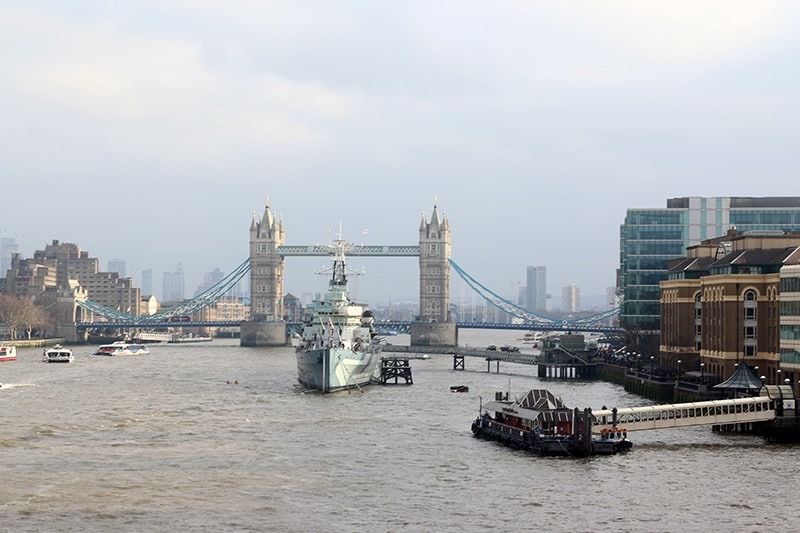 I like London! Hope this crisis will over soon and I will go there again.

The location you shared is awesome and is my top choice.