Oh man. OH MAN was my master bathroom disgusting. When we bought our mid century modern house two years ago, we knew we would want to re-do it, but of course we kept having other situations that needed to be handled first. The master bathroom remodel kept getting put off. One day, the pipes all backed up and the shower filled with the contents of those pipes and we decided to go for it. I never knew I could be so excited to have a shower full of poop. But there I was, cheering. I’ll start with a few images of bathrooms I found inspiring from Pinterest, before you have to look at how hideous my current bathroom is.

I love the use of space in this bathroom, and the layout is very similar to mine.

I love the clean white feeling in this bathroom, and the warm wood custom vanity.

And I love the tile in this bathroom, so much I chose the same ones.

So at first I hired a contractor, but he quit the day before starting at 10 pm because of some sort of personal issue with his grandchildren. Then, many estimates later, I hired another contractor. He also quit the day before starting, because his wife sold a screenplay (could there be a more L.A. sentence?). I finally decided to just contract it myself. I’m happy with this decision and I’m saving a lot of money, but it’s also a lot of work. Here is where I am right now.

It looks so much better here than it did in person. You’ll just have to trust me. From the doorway: 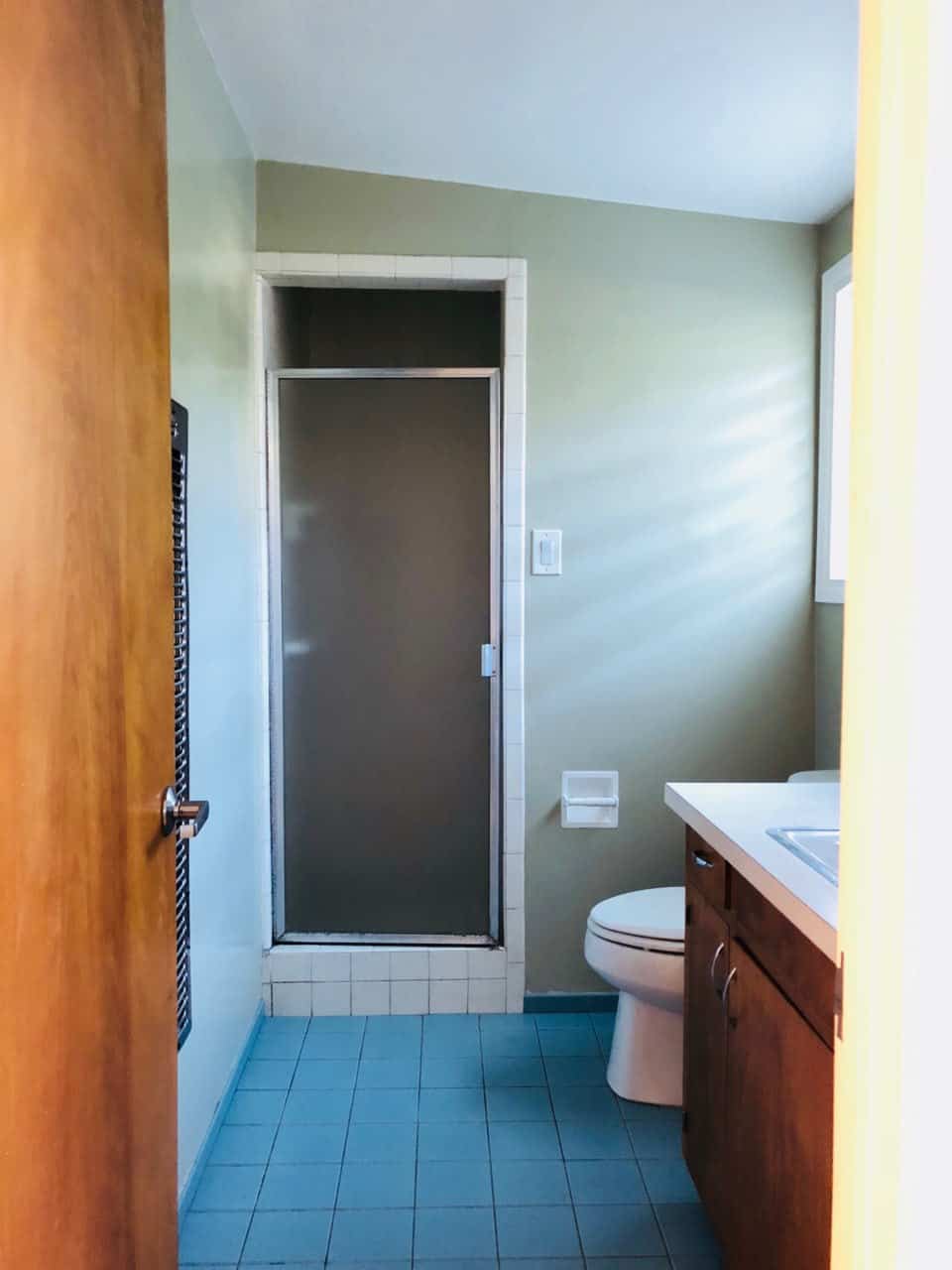 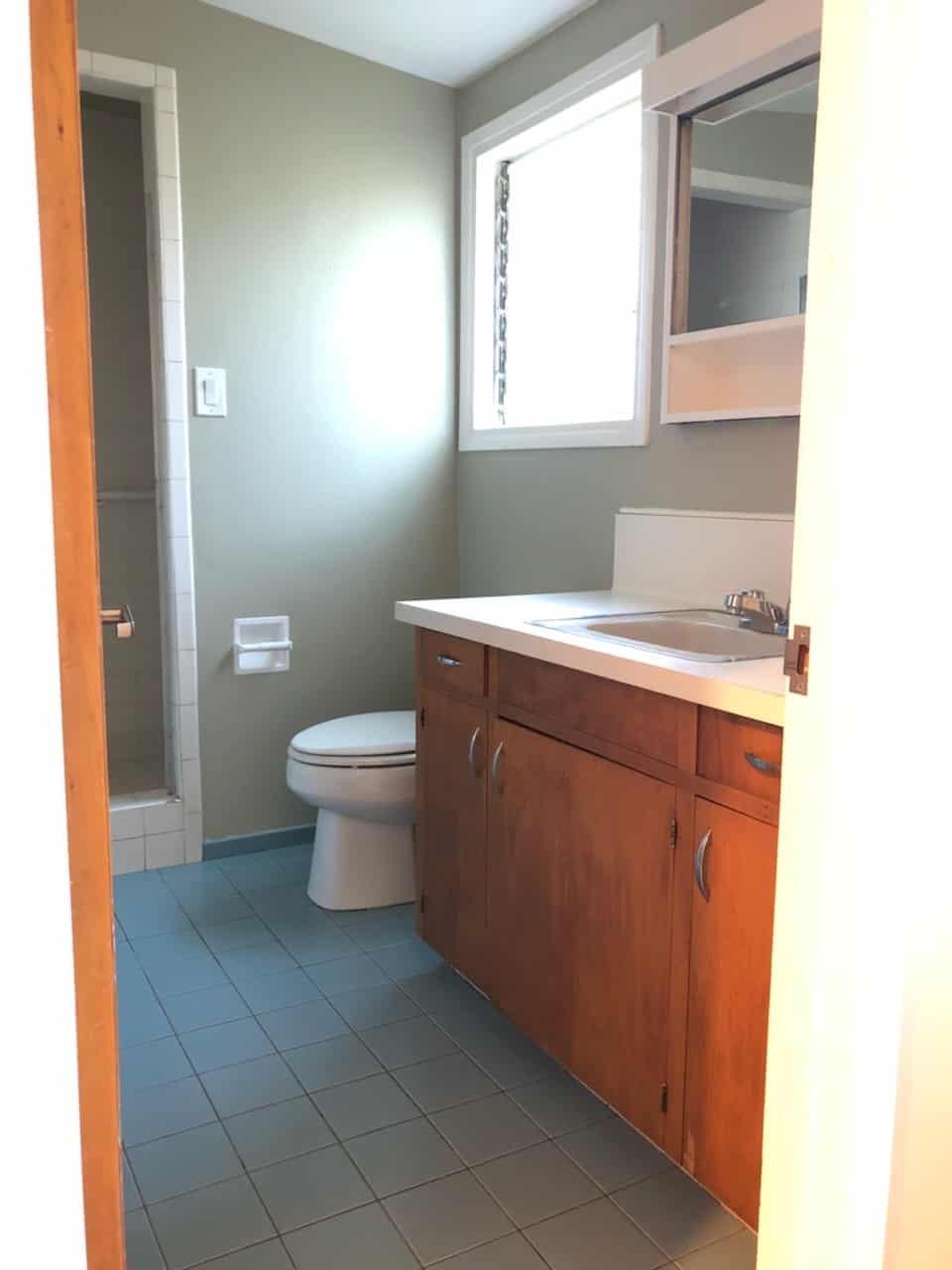 It had to go. The entire thing. The cast iron pipes are 69 years old (from 1949!) so we needed to tear up the cement foundation to replace them. Goodbye everything in the bathroom! So I had the demo done… 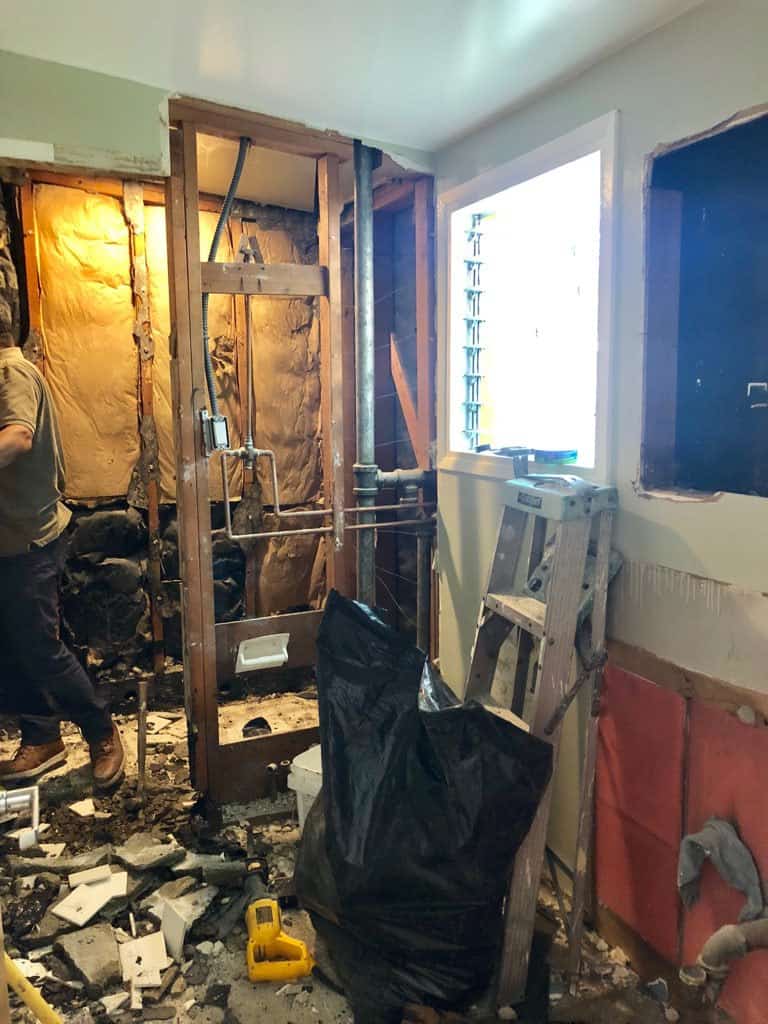 I was planning to take down that wall in front of the shower, which contained the hot and cold water and showerhead, and move the showerheads to the long end of the shower, then replace the wall with glass, to make the room feel bigger and also create more room to shower in. But surprise, surprise, the vent pipes for the sink and toilet were also in that wall. See those giant silver pipes? 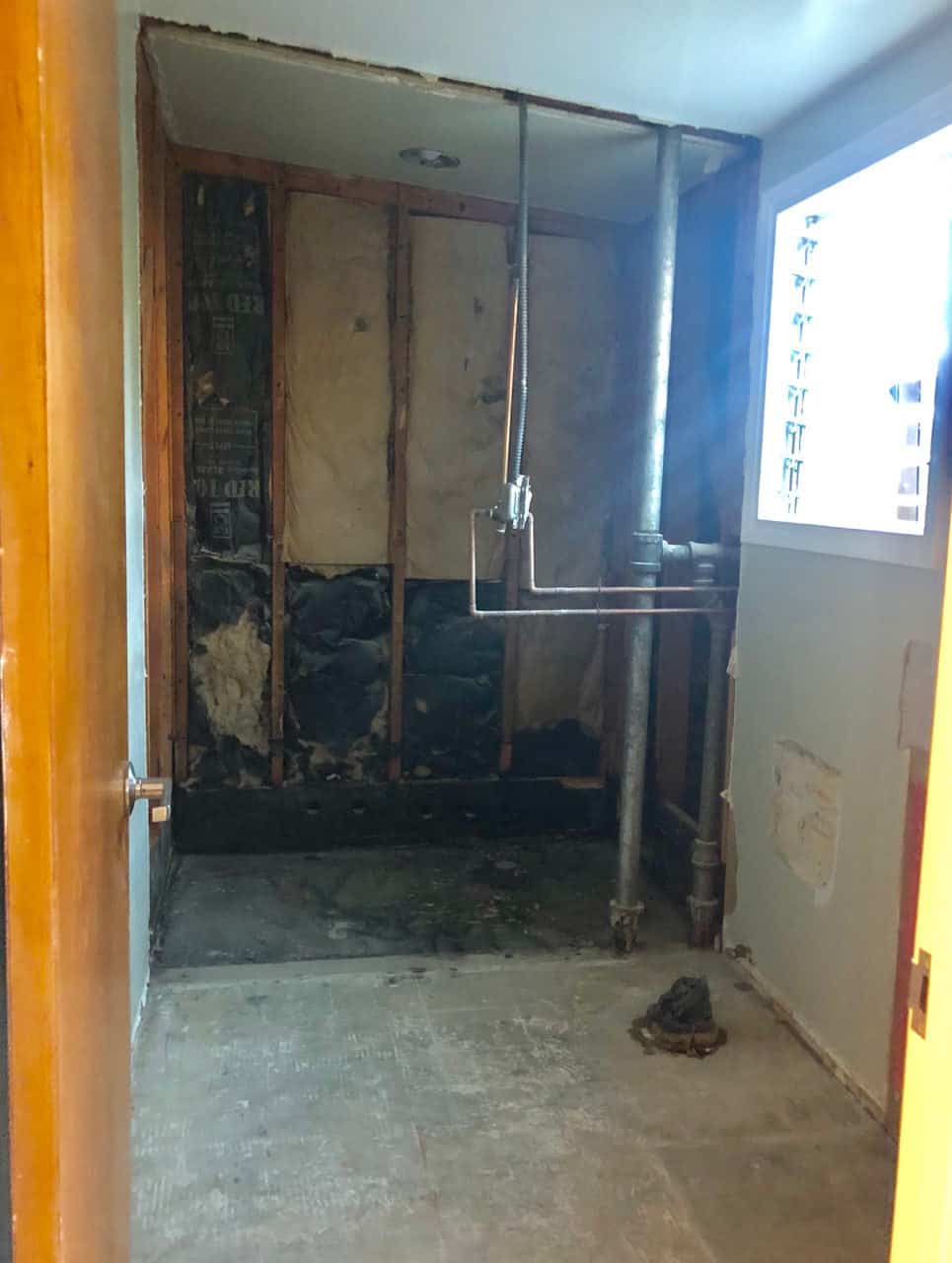 Add another day of work and $800, and the pipes have been moved into the wall. Which means I can’t have a shower shelf on that wall where I wanted it, but I guess I will figure that out. Where would you put the shower shelf?

The cement foundation was not the standard 6″ thick – it was almost 18″ thick! Add another $500 to get to the pipes. But now, new pipes. Cement has been poured back in and it’s like new. I won’t show you how truly vile the inside of a 70 year old shower p-trap is, but suffice it to say we were amazed any water was able to drain at all. Actually, yes I will. This is nasty. Tell me it doesn’t make you want to replace every pipe in your home? 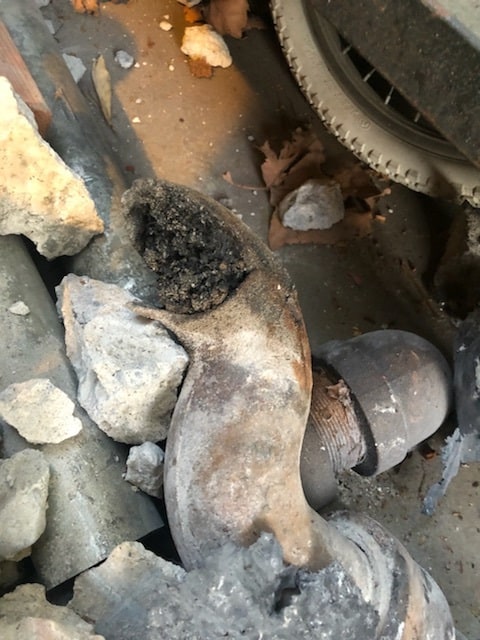 But now we have new ABC pipes that should last another 100 years (knock on wood). Here they are before the cement was re-poured. 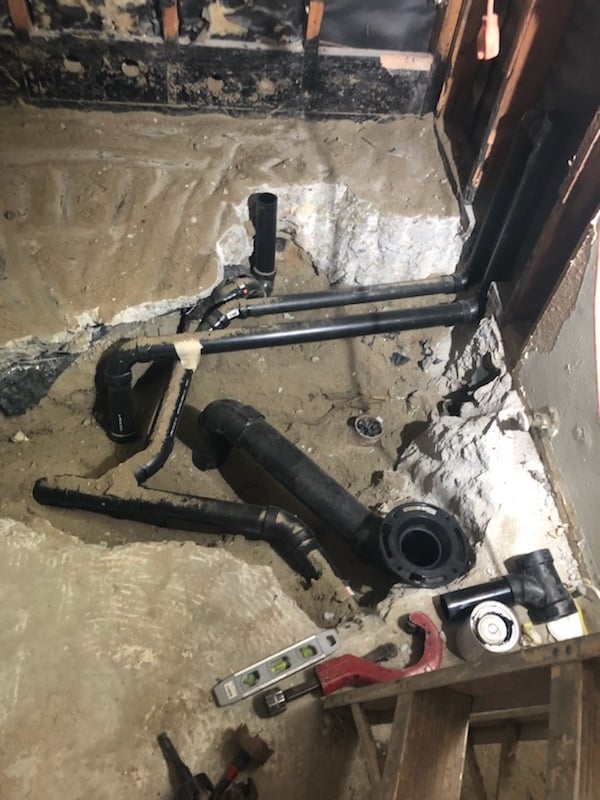 As you can see those big vent pipes have been moved into the side wall. 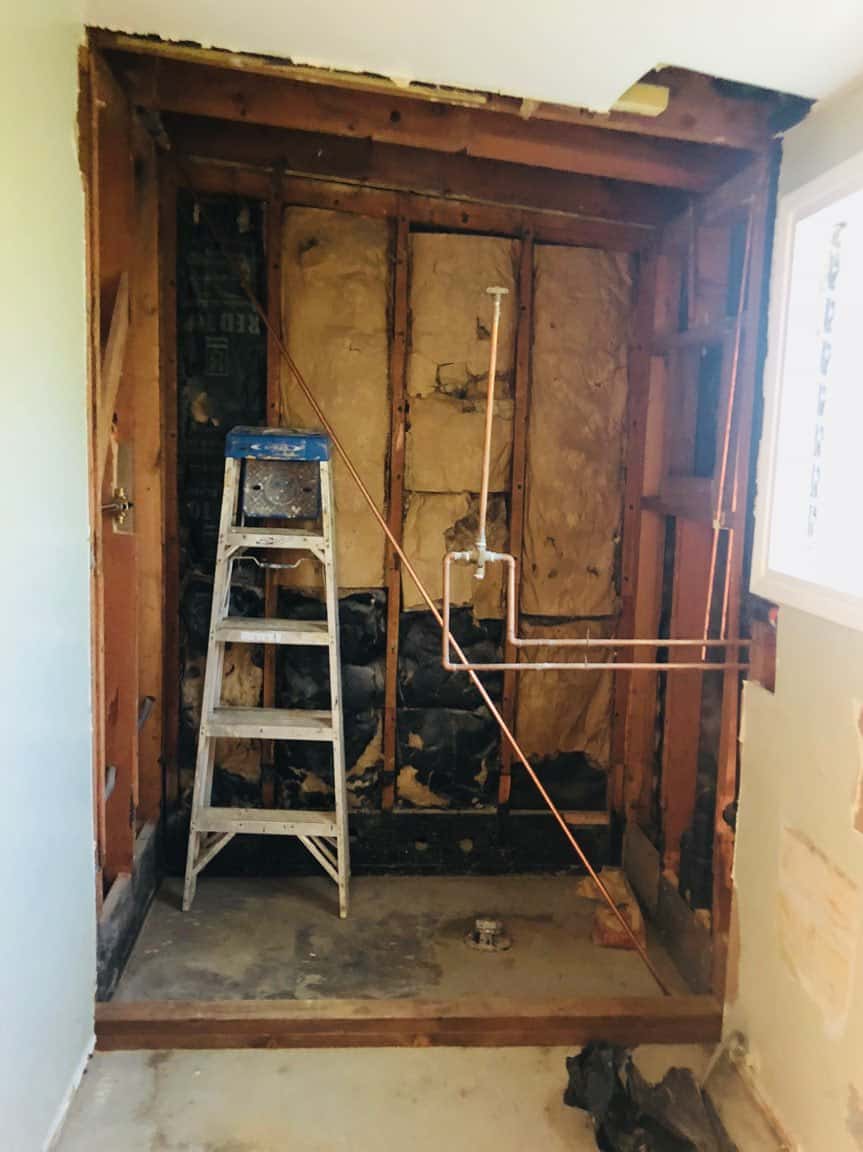 And then the hot and cold water was moved to run along the ceiling, with the shower head on the inside wall. My husband is 6’5″ so we had to put it almost on the ceiling for him to hit fit under it! He’s so excited to have a shower he can stand under. 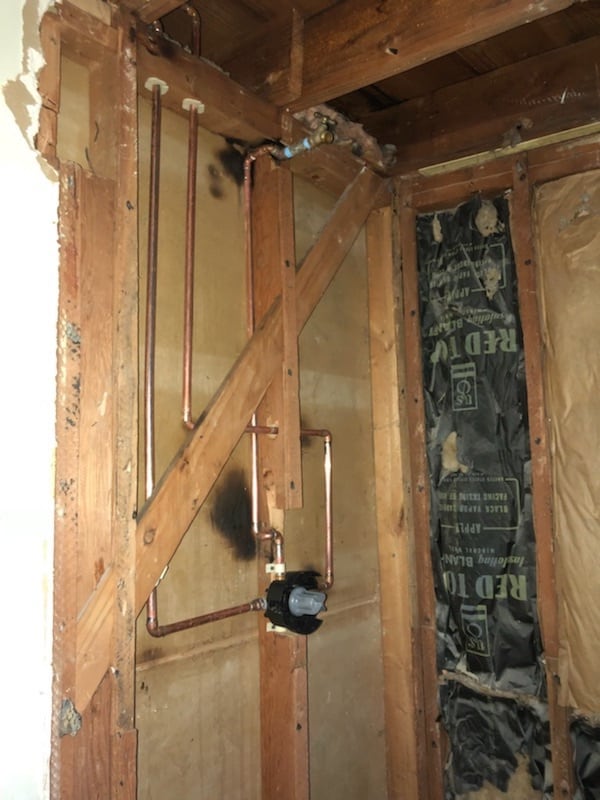 Next up was building out the shower box and ledge, then hot mopping to waterproof the shower floor. I hired my own hot-mopper! Look at that. starting to look like a proper shower area. 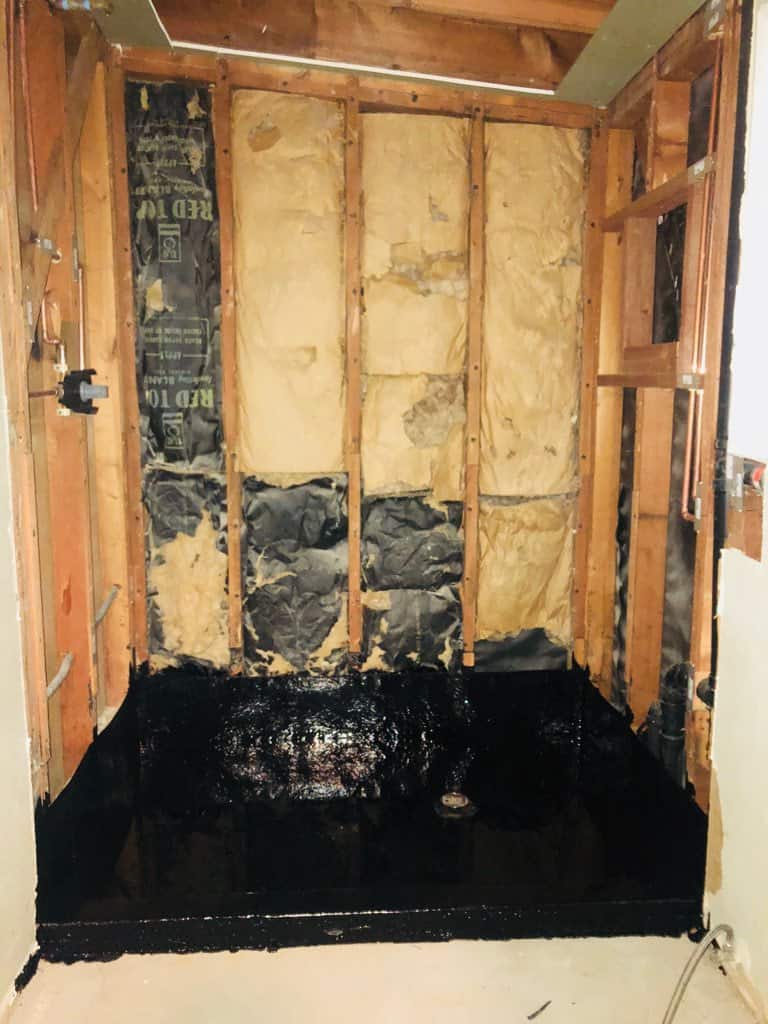 Now, onto the tile! My guy came highly recommended and started yesterday! And… found termites. @#$%#@!!! There’s only some damage in the bathroom, no actual termites (the living termites are in my living room ceiling ughhh). So, now we have to tent the house. But it can wait a few months, so we are gonna finish up the bathroom first. I’m very excited about my encaustic cement tile, though it costs more to buy and install and requires more maintenance over the years, it was my big splurge and I’m committed to it. The shower walls will be subway tile. Not sure how I will tile the ledge yet.

As you can see, this room is very dark. We will be installing several lights (an an exhaust fan) when the electrician comes by, but I think the big winner in this bathroom is going to be the skylight. It will be 24X48 (almost the entire top of the shower) clear glass with a beautiful view of the sky and maybe the orange tree that grows nearby.

I’m going for a mid century modern bathroom in a soothing gray with polished nickel finishes. Here’s the big stuff:

1 & 2. I should have planned ahead to order fixtures way ahead of time. There are so many that I wanted that had 8-12 week lead times. I was able to patch together a beautiful matching set of Kohler Purist faucets, shower valves, trim, etc. that I adore. I had an urge to go with a beautiful matte gold finish, but a little voice in my head kept telling me that this fad will pass and I will be glad to have metal finishes. I ended up choosing polished nickel which I think will bring a nice warmth to the room. I went with the Kohler Purist Cross Handle Faucet and matching shower valve trim.

4. I do want the storage of a medicine cabinet, so I went with the standard favorite Vintage Recessed Medicine Cabinet from Pottery Barn in the large size, again in the polished nickel finish.

5. I almost went with a custom vanity, but in the end found one I liked, also from Kohler, the Jute 48″ vanity in Mohair, then a matching Kohler porcelain vanity top with a square sink. I hope I love it once it’s installed! After a lot of research, I found it for the very best price on Amazon: Kohler Jute Vanity with 2 Doors and 2 Drawers, Mohair Grey, 48″, and the top: Kohler Ceramic/Impressions 49″ Rectangular Vanity-Top Widespread Faucet

6. And of course, my fantasy tiles. I found them in stock here in L.A. at Zia Tile, so I was able to send a task rabbit over to pick them up and had them within 4 days. Taos tile in steel and gray at Zia Tile.

Once I get a little further down the self-contracting road, I will put together a guide to contracting your own bathroom. I’ve learned so much, and actually really enjoyed the process. Do you have any tips or ideas for my little master bath?

Can’t wait to see after pictures when you’re done! Among other things, I dream of having a higher shower head too so I don’t have to stoop in my shower. And is it weird that I’ve now got my fingers crossed that my shower will fill will sewage soon…

Crossing my fingers that your plumbing overflows 😉

Thanks I found this awesome remodel article. I love your wood custom vanity.

This is highly informatics, crisp and clear. I think that everything has been described in systematic manner so that reader could get maximum information and learn many things.

I have enjoyed a lot reading this post keep it up.

Such an amazing and helpful post. I really really love it.

I feel strongly about it and really enjoyed learning more about this topic.

This is something I actually have to try and do a lot of analysis into, thanks for the post.

Great delivery. Outstanding arguments. Keep up the great work. Keep posting such kind of information on your site.

Hey your collection is outstanding; I never see such a type of collection before. Thanks for sharing it with us. Keep it up.

Hard to ignore such an amazing article like this. You really amazed me with your writing talent. Thank you for sharing again.

Thanks for sharing this piece of information. I really enjoyed it. keep up the good work.

Thanks for giving a wonderful blog to us.it means a lot information.