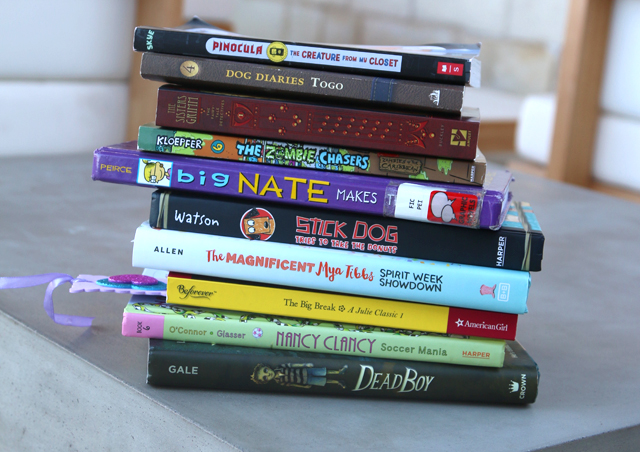 So your kid turns seven and decides that The Pigeon is no longer his jam. Been there. It’s time to dive into chapter books and graphic novels and there is a world of good ones for these new readers with a ferocious appetite for books. Clare and I have been keeping a list of our favorites.  I also invited a few school librarians that I know, our literary agent and her 9 year old son, and all of my smart and clever girlfriends (obvs, ha) with kids in this age group to add to our growing list. Get ready for some serious reading in 2016. 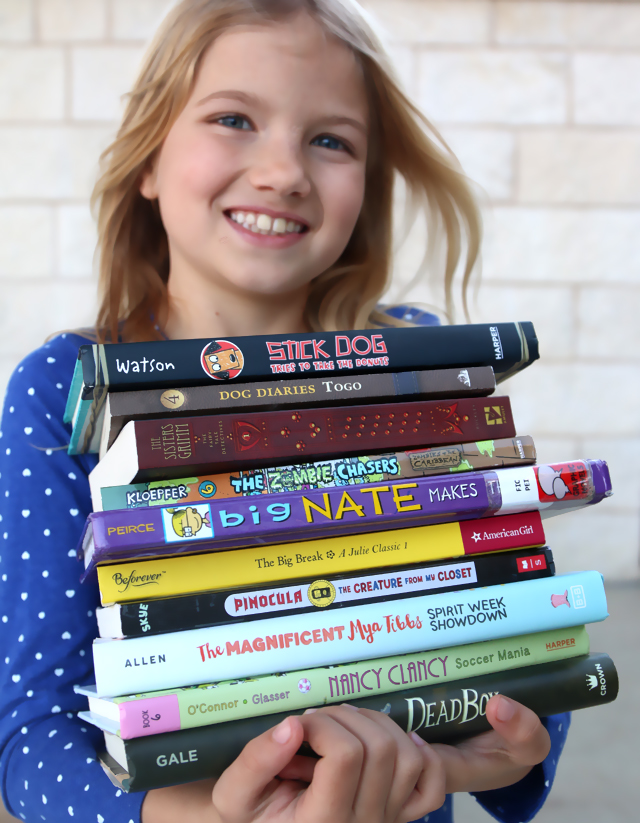 This all started because Clare couldn’t stop raving about this new book. She just loved it and I knew we had to share it with all of the 8-year-olds we know. I mean there is a character named Poo-Poo, what’s not to love? (rolls eyes and snickers)…

Stick Dog Tries to Take the Donuts by Tom Watson

The Stick Dog series continues in Tom Watson’s hilarious Stick Dog Tries to Take the Donuts! Stick Dog and his team of strays are off on another outrageous canine caper. To snatch some breakfast treats for his hungry pals, Stick Dog will need to stop a moving truck, outfox a man on a telephone pole, and calm down a very caffeinated Karen. But that’s not all. He’ll also need to manage the greatest confrontation in history when his good friend Poo-Poo comes face-to-face with the ultimate enemy—a squirrel.

Pinocula (The Creature from My Closet) by Obert Skye

For Rob Burnside, things are going pretty well. His friends are behaving, school isn’t too bad, his family’s getting along, and Janae, the girl of his dreams, occasionally notices him. Yep, life’s okay―until the lying starts.

Meet Pinocula, the new creature from Rob’s closet. He is a liar and a jokester and is determined to drive Rob crazy. Obert Skye doesn’t let his fans down in this hilarious installment in The Creature from My Closet series, which started with Wonkenstein and Potterwookiee.

Small, feisty Siberian husky Togo—the overlooked sled-dog hero of the 1925 serum run to Nome—sets the record straight in Dog Diaries #4! When a diptheria epidemic breaks out in isolated Nome, Alaska, in January 1925, the only way to get life-saving serum to the town is by using dog-sled relay teams. Twenty teams participate, and the dog who inevitably gets credit for saving the town is Balto, lead dog on the final team which delivered the serum. But few people have ever heard of 12-year-old Togo and his musher Leonard Seppala, who carried the serum for almost double the length of any other team, and twice violated warnings to avoid perilous Norton Sound and instead ran straight over the frozen ice!

The Sisters Grimm by Michael Buckley

The Sisters Grimm take readers to a world where fairy tales are fact and not everyone is who they seem! In book one of this bestselling series, sisters Sabrina and Daphne are sent to live with their mysterious grandmother, Relda Grimm. The sisters learn they are descendants of the Brothers Grimm, whose famous book of fairy tales is actually a collection of case files. The girls are the latest in a long line of fairy-tale detectives, and their new hometown is filled with Everafters (as magical folks like to be called)—some good and some very, very bad. When a mysterious Everafter sets a giant loose on the town, it’s up to the Sisters Grimm to save the day.

The Zombie Chasers: Zombies of the Caribbean by John Kloepfer

The Zombie Chasers take to the high seas in the sixth installment of John Kloepfer’s hysterical Zombie Chasers tween series, illustrated by David DeGrand. With all the middle school shenanigans, fast-paced adventure, and hilarious black-and-white drawings that have made this series so beloved by reluctant readers everywhere, The Zombie Chasers #6: Zombies of the Caribbean is a gore-larious romp not to be missed!

Nate Wright is known to his pals and teachers for many things, his penchant for mischief and his school record for detentions being the foremost. But beating out brainiac Gina’s grades is not one of those things! In Big Nate Makes the Grade, the school life goings-on of Nate, his pals, and his long-suffering teachers are recounted in hilarious detail.

Julie Albright is dealing with big changes since her parents’ divorce. When she finds out that her new school has a basketball team, life starts looking up—until the coach says girls aren’t allowed to play. Julie decides to fight for a place on the team, and almost loses her best friend in the process. Meanwhile, a school project forces her to face some hard truths about her family—and herself. As the holidays arrive, Julie begins to realize that changes can be both bad and good, and that sometimes the best way to cope is to make a few changes of her own.

A hilarious and spunky new heroine in the vein of the heroines of such beloved books as Ramona the Pest, Ivy and Bean, and Clementine. Nine-year-old Mya Tibbs is boot-scootin’ excited for the best week of the whole school year—SPIRIT WEEK! She and her megapopular best friend, Naomi Jackson, even made a pinky promise to be Spirit Week partners so they can win the big prize: special VIP tickets to the Fall Festival! But when the partner picking goes horribly wrong, Mya gets paired with Mean Connie Tate—the biggest bully in school. Can Mya work with Mean Connie to win the VIP tickets and get her best friend back?

This one gears a little younger and is perfect for girls just graduating from the Fancy Nancy Classics. Clare wanted you to know that although she enjoyed this one, she is a little too old for it. It’s better for Quinn. ha

Normally Nancy doesn’t like dressing like everyone else. But wearing a soccer team uniform—well, that’s different. Nancy adores being on the Green Goblins—she loves cheering for her teammates, sharing refreshments, and painting her fingernails bright green before every game. If only she wasn’t cursed with slow legs! All Nancy wants is to be mediocre—or maybe even a little better than average. Will she reach her goal? Here’s a brand-new chapter book with plenty of humor and sports action, written expressly for kids like Nancy who aren’t the star of their team. Fans of Fancy Nancy will love joining Nancy Clancy in the latest edition to the chapter book series!

Crow Darlingson isn’t like other kids. He stinks. He’s got maggots. His body parts fall off at inopportune moments. (His mom always sews them back on, though.) And he hasn’t been able to sleep in years. Not since waking up from death. But worse than the maggots is how lonely Crow feels. When Melody Plympton moves in next door, Crow can’t resist the chance to finally make a friend. With Melody around he may even have a shot at getting his life back from the mysterious wish-granting creature living in the park. But first there are tests to pass. And it will mean risking the only friend he’s had in years. 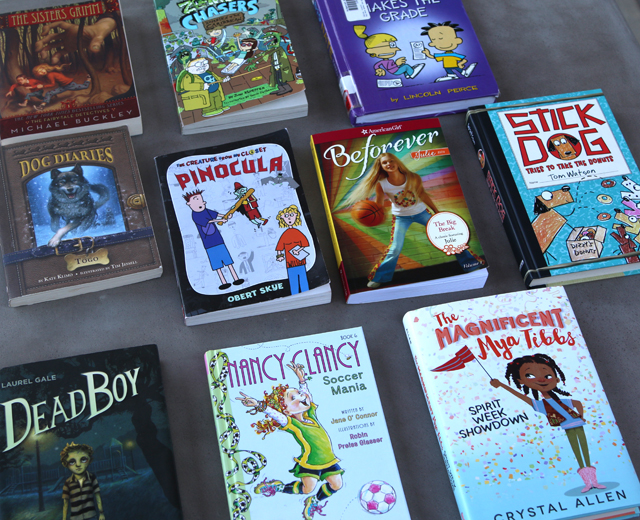 And we are just getting started. Chapter 2 is up next.

[…] week we shared Chapter 1 of our Middle Grade Book List, a compilation of the favorite books of our brilliant friends, a few book industry people we know, […]

I love Nancy Clancy. I read this book several time as an adult already and hope that my kids will love it too when they grow up enough. Thank you for the books )))