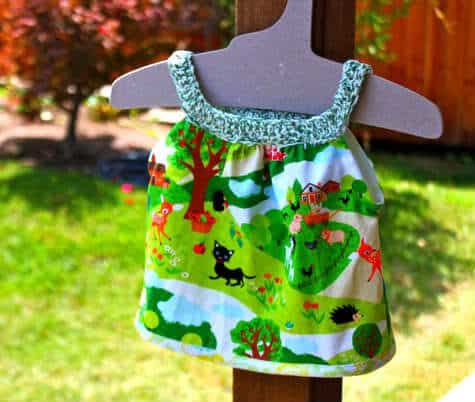 Do any of you sewers also crochet?  Or do crocheters also sew? (is crocheters a word?)  I’ve been getting the feeling these are one-or-the-other type hobbies.  Even so, I’ve just been learning crochet this year and i really like it, though for me it’s a little bit of delayed gratification, since most projects seem to take longer then sewing. 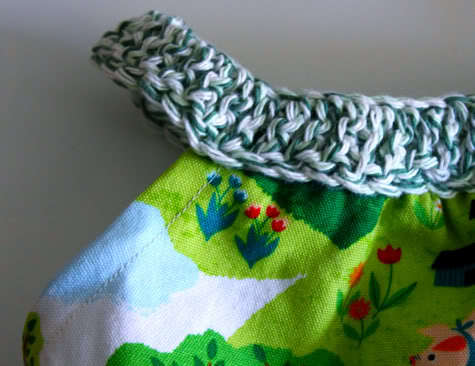 That being said, I’ve tried to come up with projects that use crochet but are a little quicker, like this top. You just crochet the neckline, then sew the dress to it.  It’s a lot like the Snappy Toddler Top, with a different neckline.   The cotton yarn is nice and airy for summer, and I ADORE this Eau de Mer fabric, Push Pin Green, which is on sale right now (along with all japanese import fabric) at Fabricworm.
Get the full Quick Crochet & Fabric Top tutorial after the jump…

1. Crochet the neckline.  This fits about an 18 month size and was done with cotton yarn and a 5mm crochet hook (size H/8) to allow for easy washing and drying and nice summer breathability.  It is just one chain of 75, then one round of 75 stitches of treble crochet, but you can make it however you like, with whatever stitches in any length. Also cut two rectangles of fabric. For my 18 month size my rectangles were 12″ wide by 9″ long. Or you could use the top pattern from the Snappy Toddler Top.  I also made a dress version but gave it away before snapping a finished pic, oops! 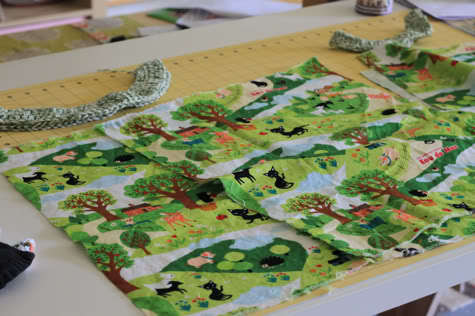 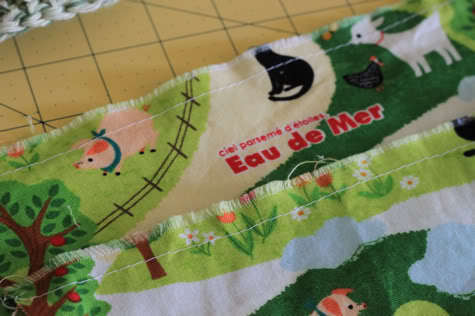 3.  Pull the bobbin thread to gather the top to the width that will complement your neck: 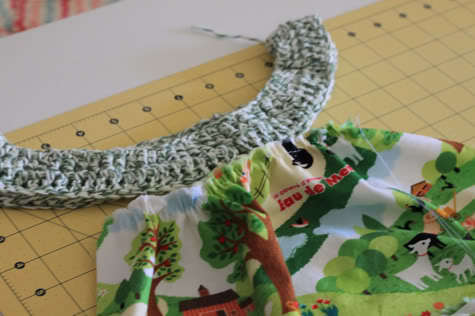 4.  I finished the edges with a serger after i gathered, which was just wrong, you should probably finish it before.  I also tried one with bias tape, which worked really well to finish the edge, but left the top edge too heavy under the crochet. 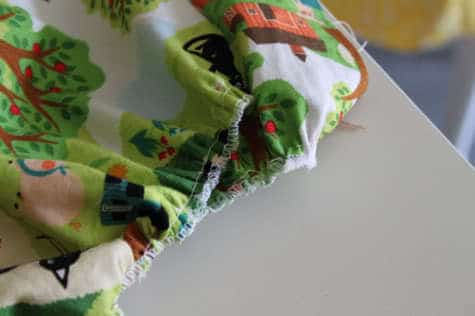 5. Pin your fabric pieces together right sides facing and sew all the way up the sides: 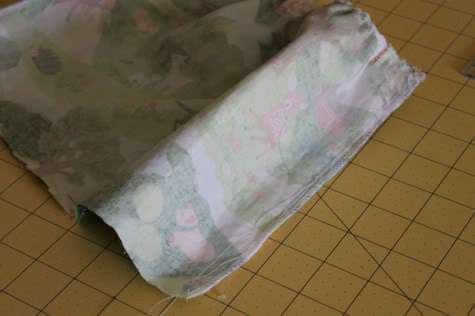 Fold in half and chop at an angle, so you’ve removed a triangle off each side of the top.  You are cutting armholes: 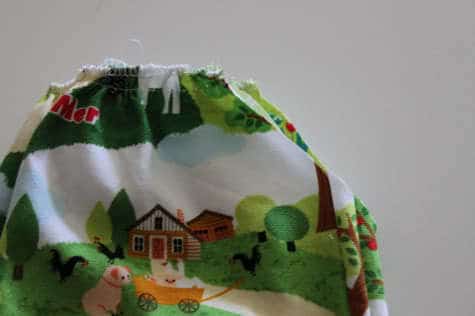 6.  Open single fold bias tape and pin it to the right side of the fabric all the way around the armhole. 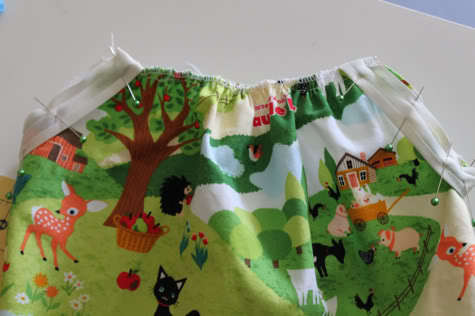 Sew it in place along the fold.

Fold the bias tape back up and flip it to the inside of the shirt, then sew in place along the edge: 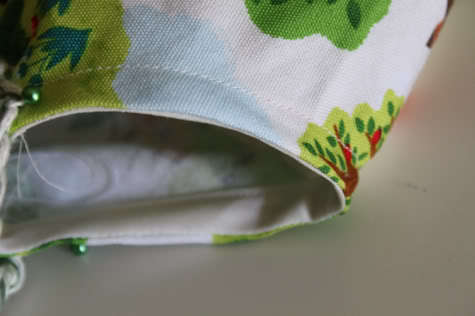 7. Now pin your neckline to the top of your shirt.  Make sure you pin carefully so your armholes are the same size on each side! 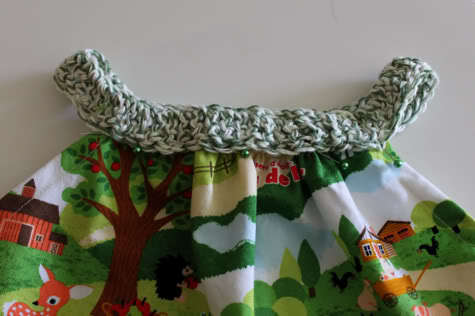 Sew in place with a straight stitch.  You won’t be able to see it.  I used white thread, here is a close up: 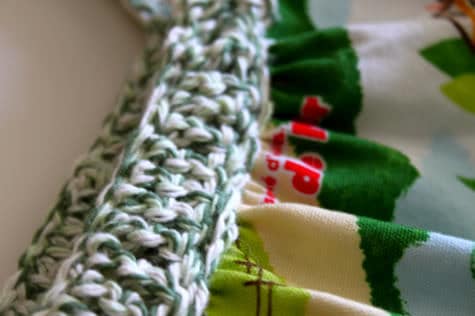 8.  You can hem the bottom, but I finished mine with some Homemade Bias Tape in Nicey Jane WashDay Ticking dandelion.  Done! 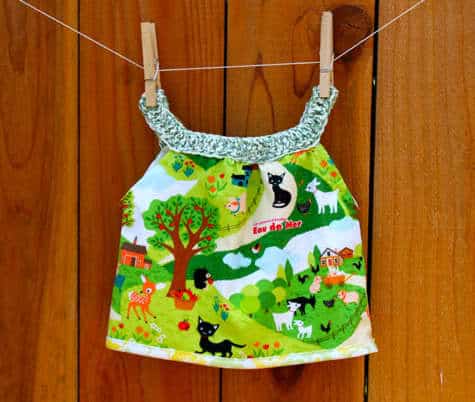 Very cute! I crochet and sew but I definitely have a lot to learn on the sewing spectrum!

I know that I say this every time you make something but I think this might be my most favorite ever! So sweet! And I adore that fabric! 18month, you say? hmn…

Just for the record: I crochet and sew. And sewing is no instant gratification for me. I don't own a sewing machine and do everything by hand, lol.

Hooray! This dress is so cute (love the print). I crochet and am learning to sew (which is becoming more gratifying since sewing is so much faster). I'm excited to give this a try. Thank you!

I am a crocheter(?) and a sewer, or at least I attempt to be. I love the top and May have to make one in my size, If I find a light weight thread and add some detailed stitches it could be a gorgeous hot mess momma top. Thanks for the Fantastic ideas.

Ok…I am off to make one of these right now! I just started to crochet and I love that the top part is super easy for a beginner like me:) I have some black yarn that I didn't know what to do with…now I do!

Here is a link to my version:) I linked it back to your tutorial.

oh my melissa what a fun treat to see your top!! love the pink!!

Ok, it's official… I MUST learn how to crochet!!! That top is the cutest!

Yes, crocheter is a word – but you have to really pronounce the "T" so it's borderline insulting. Makes it more fun to shock the older ladies at the church picnic circuit and such.

This top and dress is PERFECT and I can't WAIT to try it out. Croche"T"ing is the best and so easy and quick, great project – a big thank you from me.

I taught myself to crochet when I was pregnant with Number 1 as it's something I can do in front of the TV, and I do not have the precision for hand-sewing. I love this combination of sewing and crocheting – definitely something you won't see everywhere. Another project for my to-do list!

I sew and just recently learned to crochet and have been thinking of doing something like this. Thanks for the tutorial =)

Crochet all the way! I need to get over my fear of bias type and try this.

Very cute! I've been looking for cute new things to make for my 6 year old, and I think I just found one! Thanks!

I love to crochet and have made several of these they are great and I use different crochet techniques for top…..Thank God I found this site…Alll these are for Charity Auction

This is so awesome!! I am starting to sew for my girls – and now and can incorporate the crocheting my Grandma taught me when I was young. So fun and love the fabric!

This is super cute! I will be linking up at http://www.tangledhappy.blogspot.com next month. Thanks your for sharing this! 🙂

This is a fantstic tutorial! I guess one can also make these for 'not so young girls' 😉

I do both – but I crochet more. I was pretty heavy handed with my sewing for years until I wanted to do something that was more portable. And, after having a baby who's now a toddler…and then another baby, I find that it's easier to just sit a crochet or knit project down and come back to it later

I crochet and sew, I am, by trade, a costumier, though I no longer work and I have crocheted since kiddiehood. As for which I do most, well, it depends a lot on the time of day, I crochet in the evenings as my partner hates noise, nuff said 🙂