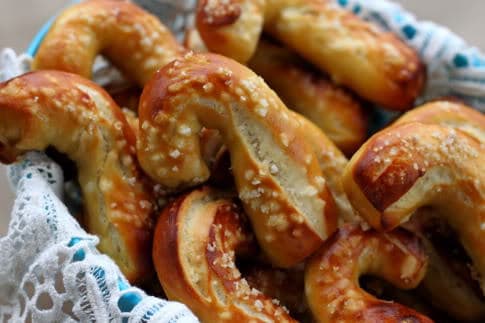 I’m a supernerd – I’m so excited about these silly soft pretzels shaped like candy canes!  The challenge was that Scarlet’s preschool was having a holiday party, but I waited too long to sign up for what I would bring and everything was already taken.  So her teacher asked me to just bring some sort of non-sweet munchie.  Hmm.  Then it hit me!  Soft pretzel candy canes! 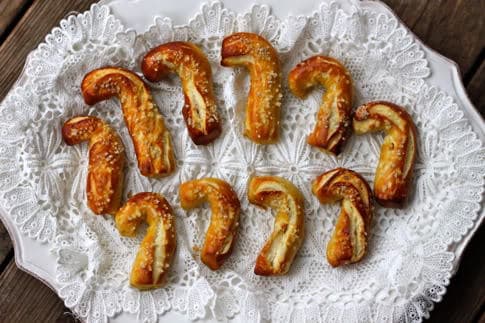 I found the recipe from my fave kiddie cooking site written by my friend Rebecca: Cooking With My Kid (Scarlet and her son Gus have already been found in bed together, sigh).  She has so many fun kid-friendly holiday recipes right now, like her Easy Gingerbread House, Holiday Granola, Sparkly Pomegranate Cranberries, and Cinnamon Sugar Popcorn. 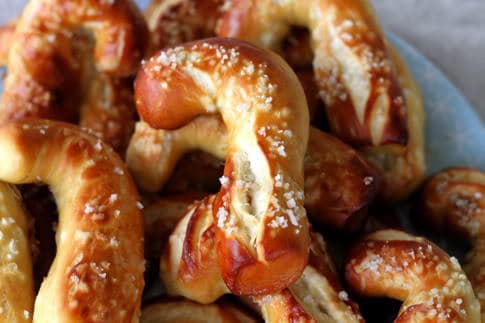 My kid was already in bed, but I did do some Cooking With My Husband which was really fun, he helped roll out the candy canes. I think these would make an awesome hostess gift or appetizer for a holiday party! A sweet version with cinnamon sugar could be dipped in a little glaze to look like snow maybe?  These were not difficult to make at all, and they were insanely delicious!

Get the Pretzel Candy Cane recipe after the jump…

Tell us what kind of fun holiday treats you are planning on concocting this week in the comments, you could win some of those pretty Jacinda-made snowflakes pictured on the left!


Pretzel Candy Canes
This soft pretzel recipe is from Cooking With My Kid, which she adapted from Alton Brown.

Combine the water, sugar and kosher salt in the bowl of a stand mixer and sprinkle the yeast on top. Allow to sit for 5 minutes or until the mixture begins to foam. Add the flour and butter and, using the dough hook attachment, mix on low speed until well combined. Change to medium speed and knead until the dough is smooth and pulls away from the side of the bowl, approximately 4 to 5 minutes. Remove the dough from the bowl, clean the bowl and then oil it well with vegetable oil. Return the dough to the bowl, cover with plastic wrap and sit in a warm place for approximately 50 to 55 minutes or until the dough has doubled in size.

Preheat the oven to 450 degrees F. Line 2 half-sheet pans with parchment paper and lightly brush with the vegetable oil. Set aside.

Bring the 10 cups of water and the baking soda to a rolling boil in an 8-quart saucepan or roasting pan.

In the meantime, turn the dough out onto a slightly oiled work surface and divide into 8 equal pieces. Roll out each piece of dough into a 24-inch rope.

Here’s where we change it up.
Cut each rope into three equal pieces.  Shape into candy canes.  They don’t stay put super well so give them a little pinch at the top and get to boiling pretty quickly. Place onto the parchment-lined half sheet pan.

Place the pretzels into the boiling water, for 30 seconds. She recommends doing it one by one, but since these were small and my pan was big, I dumped them in in two batches.

Remove them from the water using one of those flat spoon-like things with holes in it (what are those called) so the water can drain. Return to the half sheet pan, brush the top of each pretzel with the beaten egg yolk and water mixture and sprinkle with the pretzel salt. Bake until dark golden brown in color, approximately 12 to 14 minutes. Transfer to a cooling rack for at least 5 minutes before serving. 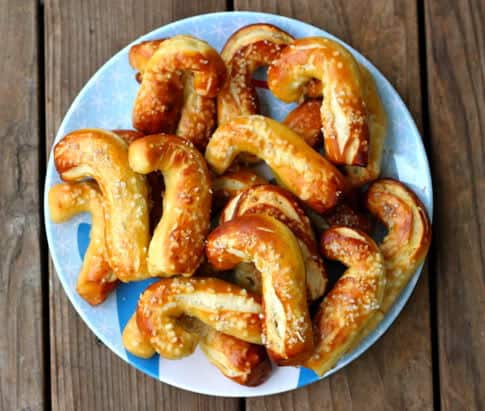 Package them up cute!  These were awesome fresh but still super yummy the next day.  I thought about adding red food coloring but decided it might look too confusing and therefore unappealing.  Also thought about coloring the salt red, but then I remembered this was for a class of two-year-olds, not the martha stewart show, and I let it be as is. 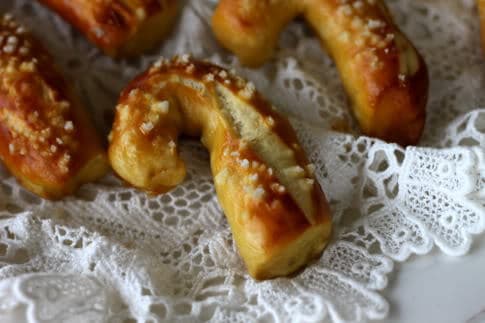 These look delicious! Thanks for sharing.

Starting my Monday morning with a smile on my face because I'm wearing my new, beautiful, Alloy Jewelry necklace! I'll send a pictures soon.

I love cookingwithmykid.com! She has gotten me in the kitchen with my 3 year old, and turns out she loves cooking. These pretzels are one of my favorite recipes, we've made them several times (not shaped like candy canes though. FUN!) Fun little tip ~ after baking we froze a few, we just pulled them out and put them in the toaster oven. . . they were so fresh and yummy!

ps. cookingwithmykid is how my Mom and I found prudent baby, and we are daily (at least) visitors!

These look so fun and yummy! I'm gonna go dig in my pantry and see if I have the ingredients. School is out and this will be a good remedy for idle hands.
Oh, and the kitchen tool you're talking about is called a spider I think.

We have been making frosted sugar cookies galore, as well as peanut brittle, almond brittle, and chocolate peanut butter cookies. Up next on our baking to-do list is toffee, almond bark pretzels, puppy chow, and gingerbread cookies. I think these soft candy cane pretzels would be a great addition to our food list-something non-sweet to balance everything out! Plus, my two year old daughter LOVES to help mommy cook =)

My mother used to make bunnies out of a soft dough with a bit of orange peel in it at easter time. One year we used it to make snowmen and it was a huge hit. Not really sweet dough either but perfect for marmalade slathering!

I LOVE http://www.cookingwithmykid.com and I LOVE PB. So this, to me, is heaven! Your idea to shape the pretzels is genius! I'm going to do hearts for Valentine's day!

I'm going to try these for our family Christmas Eve-after-service game night. My mouth is already watering!

My mouth is watering… If these were in front of me, my pregnant butt would eat them ALL! Great idea!

Yay! Awesome my son loves soft pretzel's. He is super picky and I've come to believe he lives off air alone, and the occassional mall pretzal. Now I can make some fresh ones at home to enjoy. YUM!

Yummy, yummy, yummy, making those tomorrow to start off winter holiday. I made cocoa blocks (essential hot chocolate fudge on a stick) you dissolve in hot milk for teachers and they were so delish (yeah I didn't eat them straight off the stick, definately not). Can't wait to munch on pretzels and watch christmas movies with my girlies!!! Love love love you Prudent Mamas!! Thank you!!!

They are wonderful. Thank you for the idea!

1 package active dry yeast is how much exactly? I have a jar of yeast!
These look lovely BTW! Would love to give this a try!