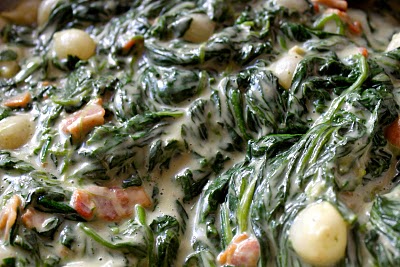 This creamed spinach with bacon and onions recipe is a family favorite (even little Scarlet likes it!), a little time consuming but not too difficult, and totally worth it. Make it today and reheat it in the oven on Christmas.  Just make sure no one eats it before then!  Get the recipe after the jump…

2 pounds of spinach or so
1 bag frozen pearl onions
a bunch of butter
3 to 4 tablespoons flour
1.5 cups milk
3/4 cup cream
1 package of bacon
Pinch of nutmeg
Salt and pepper
Lemon juice
First you’ll need to wash and drain your spinach.  Toss all the tough stems.  I found like 50 blades of grass and one sprig of cilantro in my spinach, so i recommend being a little meticulous about this: 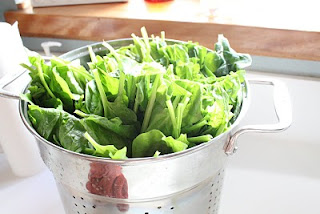 Working in batches, put the spinach in a pan, put the lid on and cook for about 3-4 minutes, stirring once or twice to wilt it: 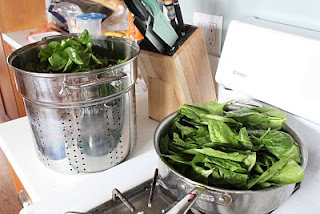 As you complete each batch put it in a strainer to cool: 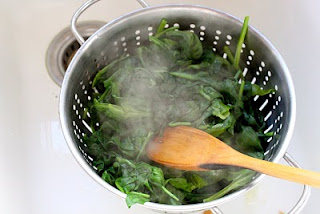 Then squeeze out the excess water.
Meanwhile, boil some water and throw your bag of frozen onions in there.  Boil them for about five minutes then drain them and rinse with cold water to stop them from cooking: 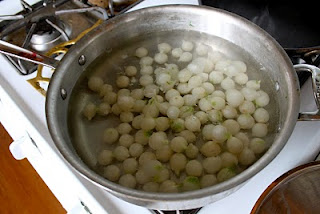 In a seperate pan (not the final pan for your spinach) melt about 3/4 of a stick of butter.  Then add 3-4 tablespoons of flour and cook for five minutes, stirring the whole time.  It’ll get nice and foamy.  Then add your 1.5 cups of milk in a stream and cook for another minute or two.  It’ll look like this: 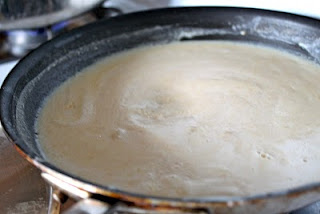 Set that pan aside and grab your big pan to make your creamed spinach in.  Cut your bacon into bits, then melt a tablespoon of butter and throw the bacon in with it.  Cook until the bacon is crispy and brown, about 7 minutes: 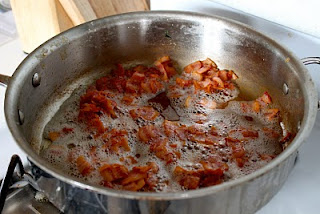 That’s a lot of bacon fat so drain about 1/2 of it out.  Or don’t.  It’s not really going to be a “healthy” dish either way.
Now add your onions and spinach into the pan with the bacon and remaining fat and stir it up: 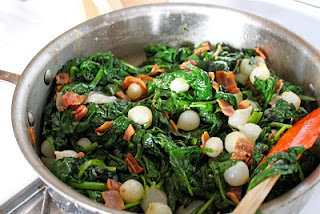 Now add your 3/4 cup cream and the milk/flour mixture from the other pan into your spinach pan along with 1 1/4 teaspoons of salt, 1/2 teaspoon black pepper, and a pinch or two of nutmeg: 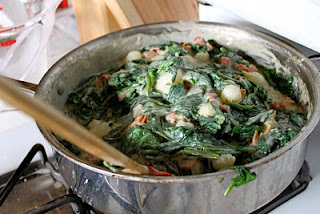 Stir it up and cook it for about ten minutes until it gets thicker (not boiling though).  Pull it off the heat and add 3 teaspoons of lemon juice.  Season with more salt and pepper to taste.
Pause to admire your beautiful child making pretend creamed spinach in her tiny kitchen: 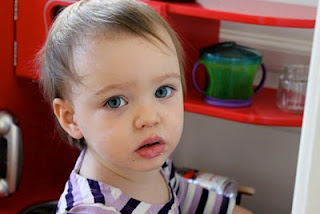 Put your creamed spinach with bacon and onions in some tupperware and hide it in the back of the fridge so your relatives don’t chow down on it before christmas!  Reheat it in the oven at about 300 degrees until it’s warmed through.
YUM!

I can't wait to make this recipe. It looks so-so yummy!