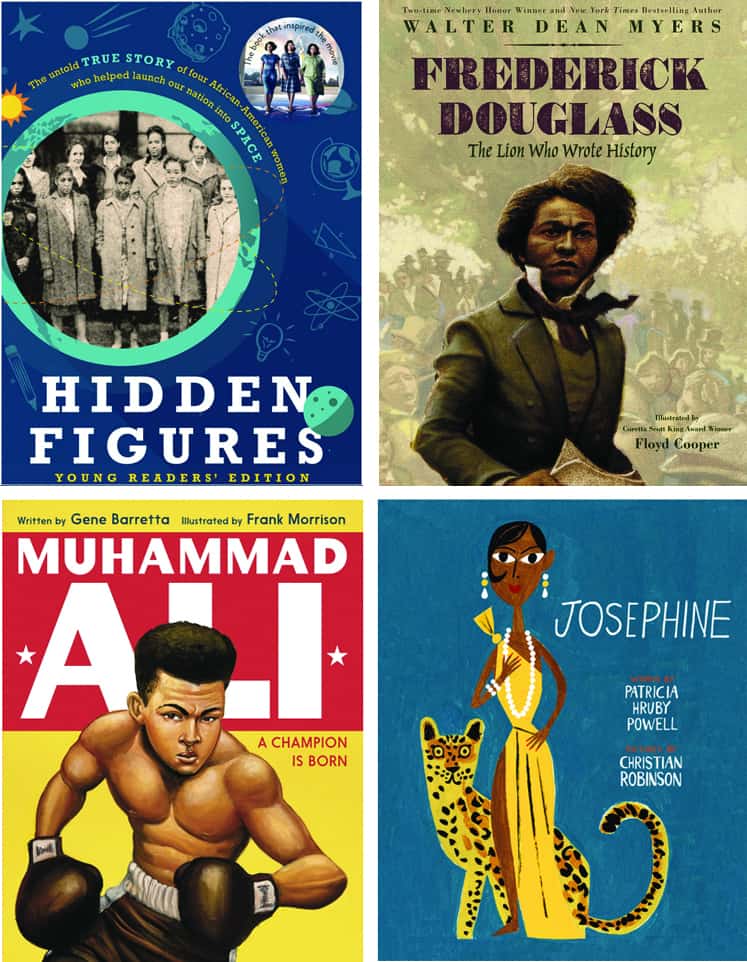 Inspired by Black History Month, we have been adding more books about amazing black athletes, artists, activists, scientists and even a couple of brave kiddos to our reading list. Here are some of our new (and classic) favorites for you to check out this month and year-round.

Frederick Douglass was a self-educated slave in the South who grew up to become an icon. He was a leader of the abolitionist movement, a celebrated writer, an esteemed speaker, and a social reformer, proving that, as he said, “Once you learn to read, you will be forever free.”
Muhammad Ali: A Champion is Born by Gene Barretta (Author), Frank Morrison (Illustrator) The unforgettable childhood story of this legendary boxing champion and how one pivotal moment set him on his path to become the Greatest of All Time.Josephine: The Dazzling Life of Josephine Baker by Patricia Hruby Powell (Author), Christian Robinson (Illustrator)In exuberant verse and stirring pictures, Patricia Hruby Powell and Christian Robinson create an extraordinary portrait for young people of the passionate performer and civil rights advocate Josephine Baker, the woman who worked her way from the slums of St. Louis to the grandest stages in the world. Meticulously researched by both author and artist, Josephine’s powerful story of struggle and triumph is an inspiration and a spectacle, just like the legend herself. 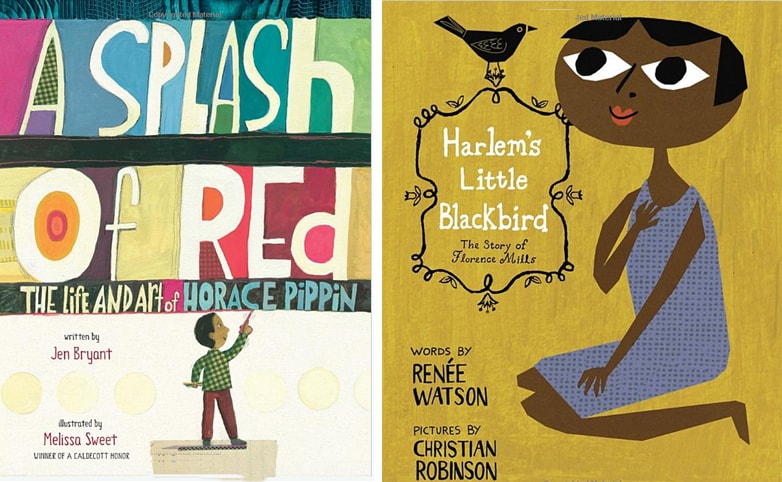 A Splash of Red: The Life and Art of Horace Pippin by Jen Bryant (Author), Melissa Sweet (Illustrator)

Jen Bryant and Melissa Sweet team up once again to share this inspiring story of a self-taught painter from humble beginnings who despite many obstacles, was ultimately able to do what he loved, and be recognized for who he was: an artist.

Born to parents who were both former slaves, Florence Mills knew at an early age that she loved to sing, and that her sweet, bird-like voice, resonated with those who heard her. Performing catapulted her all the way to the stages of 1920s Broadway where she inspired everyone from songwriters to playwrights. 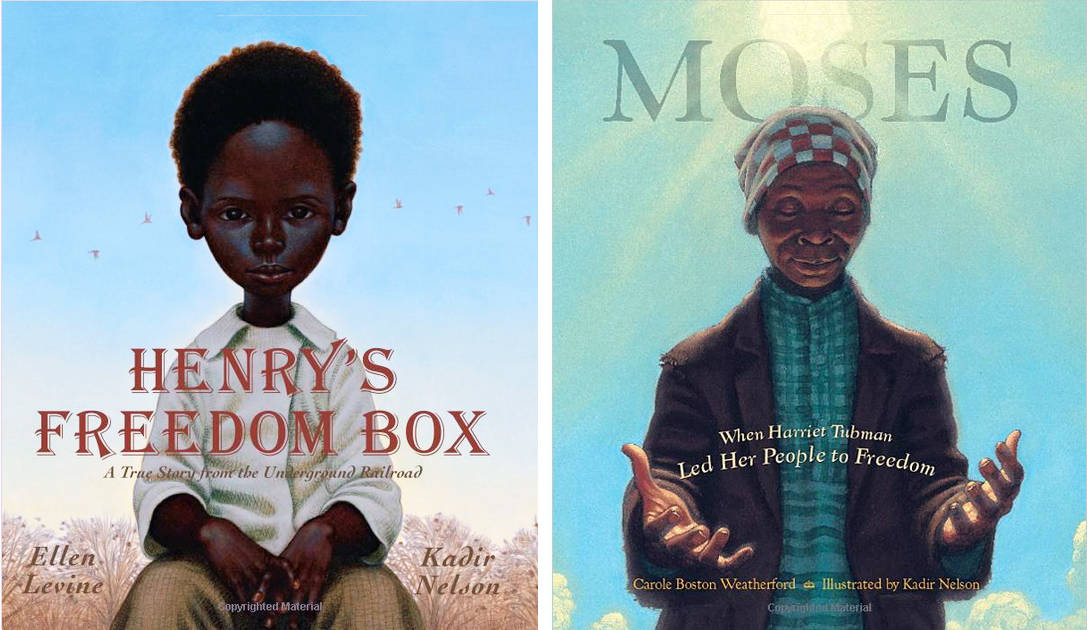 Henry’s Freedom Box: A True Story From The Underground Railroad

A stirring, dramatic story of a slave who mails himself (yes, MAILS HIMSELF) to freedom by a Jane Addams Peace Award-winning author and a Coretta Scott King Award-winning artist. This one really resonated with my kids who all read it in Library this month.

Henry Brown doesn’t know how old he is. Nobody keeps records of slaves’ birthdays. All the time he dreams about freedom, but that dream seems farther away than ever when he is torn from his family and put to work in a warehouse. Henry grows up and marries, but he is again devastated when his family is sold at the slave market. Then one day, as he lifts a crate at the warehouse, he knows exactly what he must do: He will mail himself to the North. After an arduous journey in the crate, Henry finally has a birthday — his first day of freedom.

Moses: When Harriet Tubman Led Her People to Freedom
This poetic book is a resounding tribute to Tubman’s strength, humility, and devotion. With proper reverence, Weatherford and Nelson do justice to the woman who, long ago, earned over and over the name Moses. 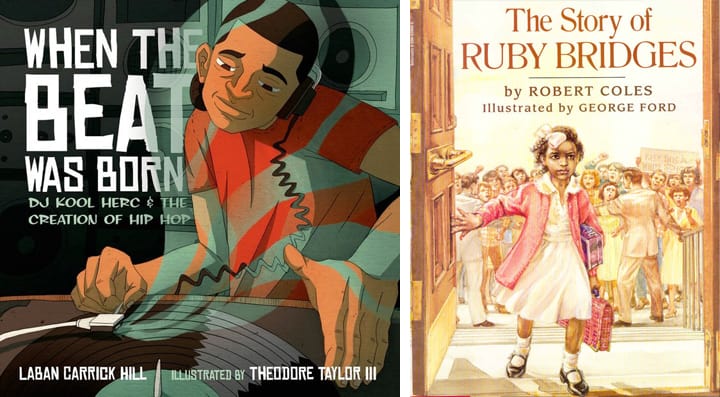 When the Beat Was Born: DJ Kool Herc and the Creation of Hip Hop

Before there was hip hop, there was DJ Kool Herc.

On a hot day at the end of summer in 1973 Cindy Campbell threw a back-to-school party at a park in the South Bronx. Her brother, Clive Campbell, spun the records. He had a new way of playing the music to make the breaks―the musical interludes between verses―longer for dancing. He called himself DJ Kool Herc and this is When the Beat Was Born. From his childhood in Jamaica to his youth in the Bronx, Laban Carrick Hill’s book tells how Kool Herc came to be a DJ, how kids in gangs stopped fighting in order to breakdance, and how the music he invented went on to define a culture and transform the world.

Celebrate the 50th anniversary of the first African American child to integrate a New Orleans school with this paperback reissue!

The year is 1960, and six-year-old Ruby Bridges and her family have recently moved from Mississippi to New Orleans in search of a better life. When a judge orders Ruby to attend first grade at William Frantz Elementary, an all-white school, Ruby must face angry mobs of parents who refuse to send their children to school with her. Told with Robert Coles’ powerful narrative and dramatically illustrated by George Ford, Ruby’s story of courage, faith, and hope is now available in this special 50th anniversary edition. 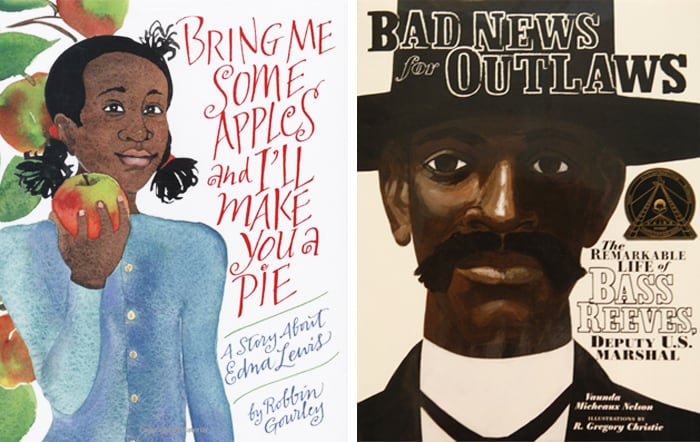 Bring Me Some Apples and I’ll Make You a Pie: A Story About Edna Lewis by Robbin Gourley

Long before the natural-food movement gained popularity, Edna Lewis championed purity of ingredients, regional cuisine, and farm-to-table eating. She was a chef when female chefs—let alone African American female chefs—were few and far between. With lyrical text and watercolor illustrations, Robbin Gourley traces the roots of Edna’s appreciation for the bounties of nature through the seasons. Folk rhymes, and songs about food are sprinkled throughout the text, and five kid-friendly recipes and an author’s note about Edna’s life are included.

Sitting tall in the saddle, with a wide-brimmed black hat and twin Colt pistols on his belt, Bass Reeves seemed bigger than life. As a U.S. Marshal – and former slave who escaped to freedom in the Indian Territories – Bass was cunning and fearless.

When a lawbreaker heard Bass Reeves had his warrant, he knew it was the end of the trail, because Bass always got his man, dead or alive. He achieved all this in spite of whites who didn’t like the notion of a black lawman.

For three decades, Bass was the most feared and respected lawman in the territories. He made more than 3,000 arrests, and though he was a crach shot and a quick draw, he only killed fourteen men in the line of duty. Bad News for Outlaws reveals the story of a remarkable African American hero of the Old West.