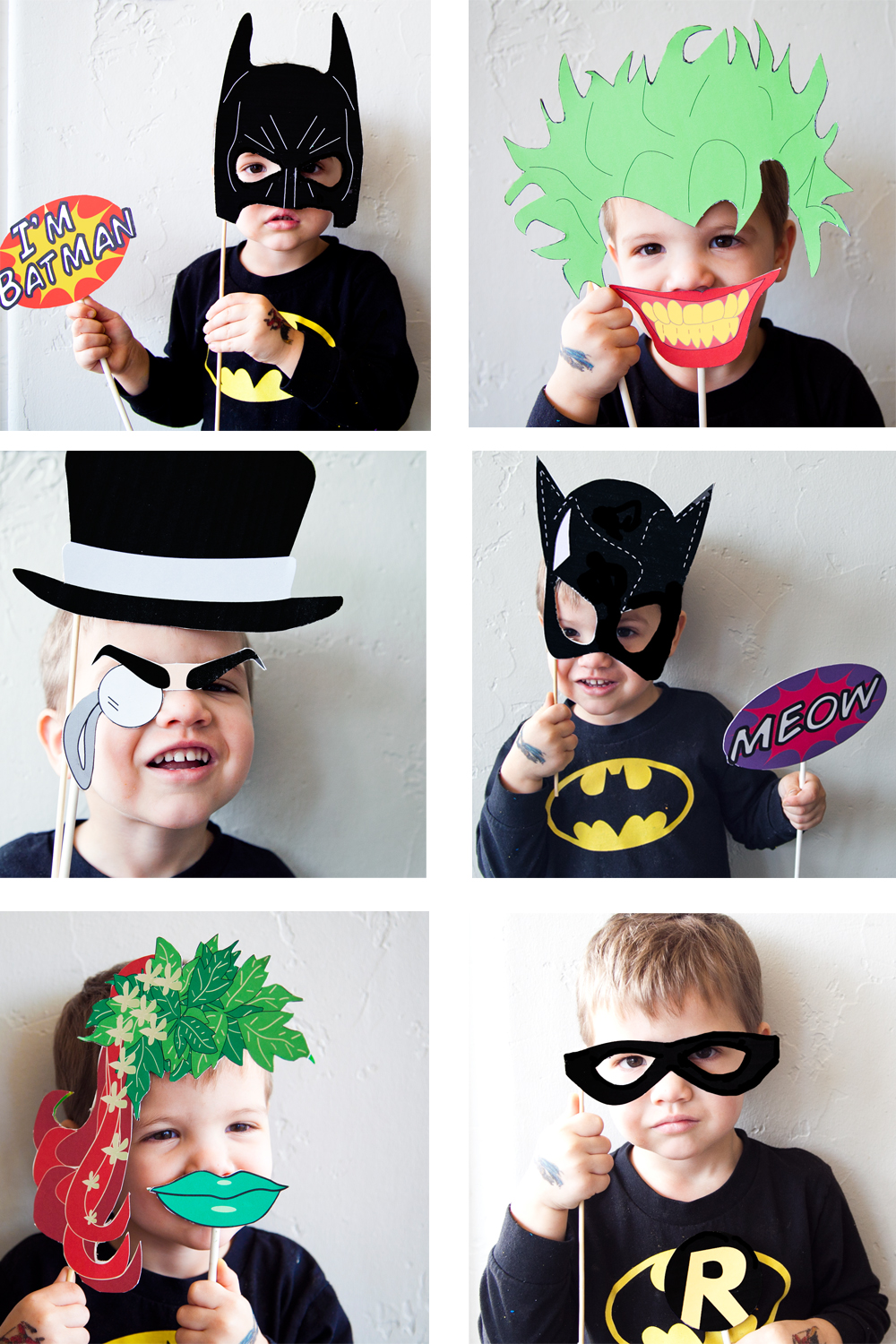 Gordon’s third birthday was a smashing success thanks to a friend of mine who came to our rescue. You may know her, her name is Jaime and she’s my own personal superhero. She gave my son Batman for his birthday. That’s right, Batman. I’ve promised I would never fall into the post-holiday rut of laming out on Gordon’s “January 7th” birthday but this year I found myself convinced that an easy cake with family and a few cool gifts was enough. I mean it IS enough, until you overhear a lisp-y almost three-year-old talking to your neighbor about his upcoming batman-themed birthday party. So after I lamented to Jaime that I had nothing planned, she said “I’ve got this,” hung up, and found Batman. Now let’s cut to the following Sunday when there was a knock at the door. Guess who it was?

Read on for the rest of Gordon’s Batman Party and the free printable masks and props to create your own Batman photo booth. 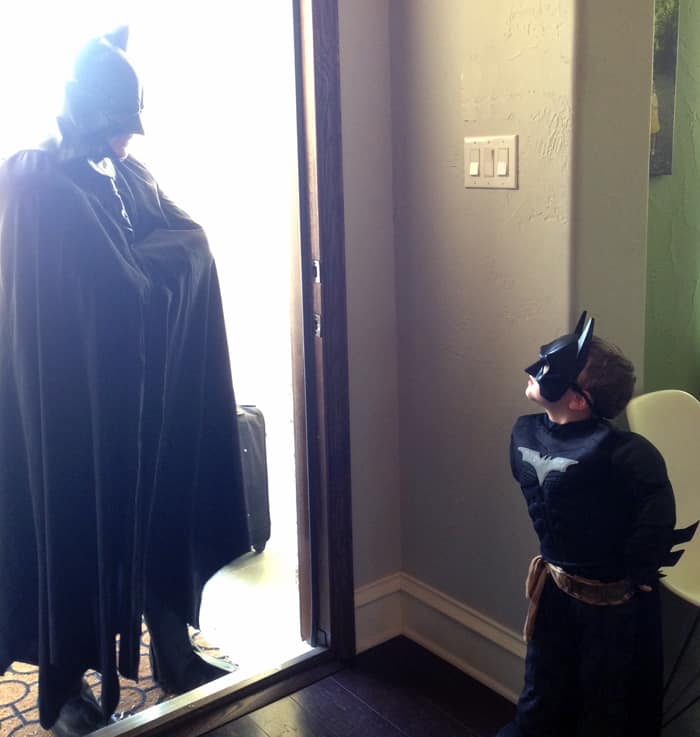 Yes, it was Batman at the door. Gordon just watched every move he made for the next two hours. He played all of the games and had a blast but did not take his eyes off of Batman once. It was amazing. 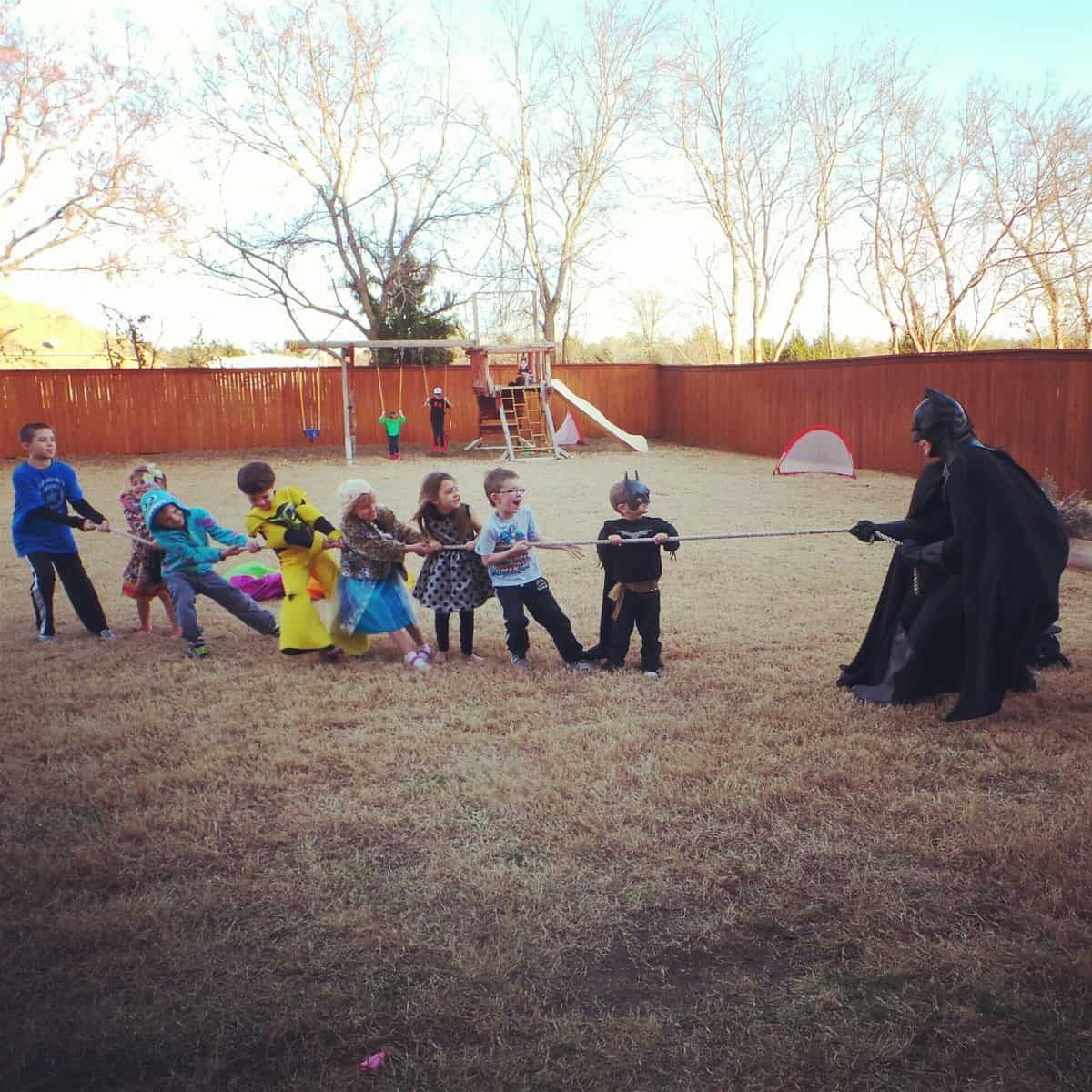 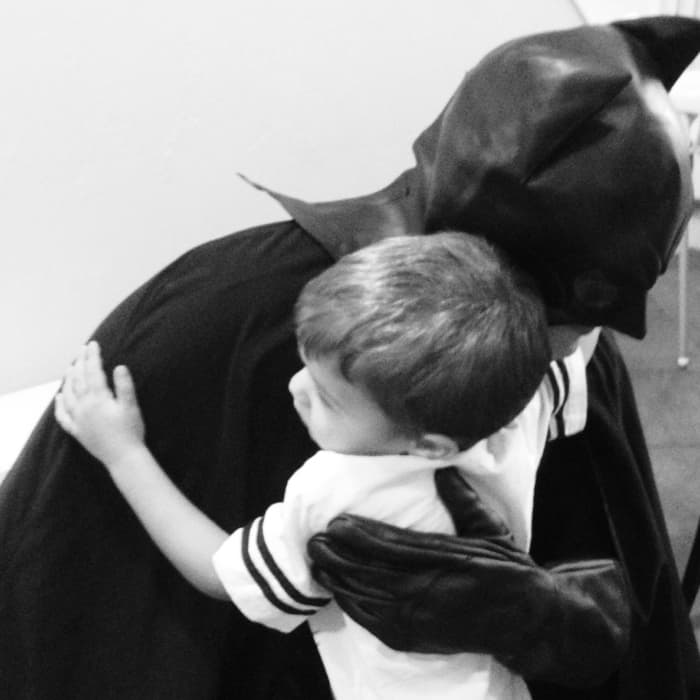 To make batman feel right at home, we made some masks of his friends, enemies and frienemies. You definitely don’t need an A-lister like Batman at your party to have fun with these quick printable photo props. Just print out the free Batman Theme Birthday Photobooth Masks and Props, spray glue them to thin cardboard like a cereal box, cut out shapes, and glue/duct tape long sticks to the back. The kids are still enjoying our set weeks later.

Hey Jaime, tonight in the car Quinn suggested that we ask you if you know Elsa too as she would like to invite her to her 5th birthday party in April. HA!

One suggestion for the stick that the printables go on — Use pain stirrers. They aren’t as pointy. DS1 was Thomas the Tank Engine for Holloween (I made his costume — mostly from stuff in the basement). He had a Thomas face that I printed and I duct taped it to a paint stirrer. Worked great and no chance of poking an eye out.

I can not believe he is three! It feels like yesterday that you were pregnant with him! Love the tug o war photo, he really is not taking his eyes off Batman, too cute! Hope y’all are doing well. 🙂

[…] adorable free printable photo props  were a last minute addition, and I’m so glad that I went ahead and made them, because […]

[…] turned four a few weeks ago and we celebrated with a Lego party. You might remember him from his Batman 3rd birthday party, or maybe his first (football) birthday party that we shared right here on Pretty Prudent, You […]

[…] and construction paper for behind the food table. I had good intentions of making a piñata and Photo Booth, but then decided not […]

Just click on the image and it will take you to the google doc where you can download and print them all! Here is a direct link as well: https://drive.google.com/file/d/0B1F4fli7PB6WU2MtcnZheWR0UUU/edit

[…] Holy Smokes Batman! How adorable are these photobooth props?! Host an awesome Batman party or add some fun to an ordinary day with these free printables! Grab yours at Pretty Prudent. […]

Thank you SO MUCH for these printables. I’m hosting a Batman Day at my library and these will be great!

Thank you! You save my party with these awesome printables!

Thank u so much for the free… BLESSED YOU MORE AND YOU FAMILY..