Did you see Jacinda’s Canton flea market scores? Hi, jealous. With all the fancy pretty things out there in the universe to lust after, why is it it’s the cheap stuff we love the most? 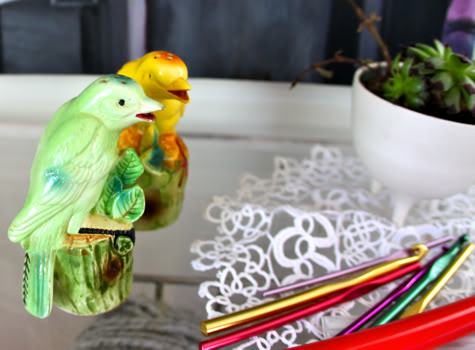 One day I had this random thought that from then on every time I went to a dinner party I would bring a set of vintage salt & pepper shakers as a hostess gift and try to theme them to the recipient. I went on ebay and bought about 40 sets for a dollar or two each. We don’t go to a lot of dinner parties anymore, and I’ve already given a set to everyone I know, so the rest just sit on this shelf. Now people think I collect them, which I don’t, unless “buying in one frantic ebay session” equals collecting: 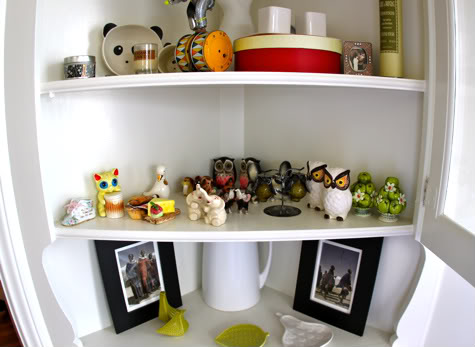 The two birds in the top pic are my favorite. They look kind of angry. They get to sit on my desk.

This captain’s wheel from the fairfax flea market serves no purpose whatsoever. When I brought it home my husband just laughed. But whatever, I like it. 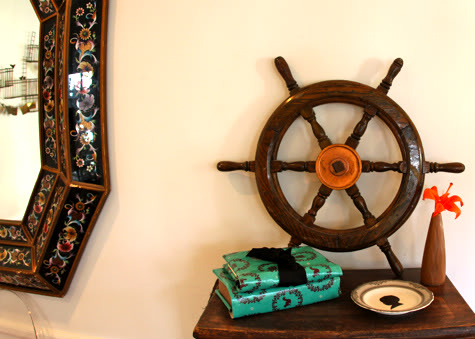 I found that frame to the left in the clearance section at homegoods for $15 and took it to a local glass shop and had a mirror put it. Everyone thinks it’s vintage, but it’s just cheap and broken.

First edition Gone With the Wind from an antique shop on Sutter Street in Folsom, CA. I didn’t name my daughter after Scarlett O’Hara but she’s rad, and so is this book. Score! 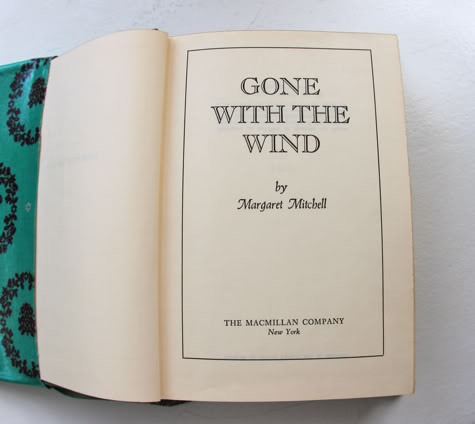 And for all of you book collectors out there, I know it’s a book club edition and therefore not worth thousands of dollars. That would be a bummer anyway, because then I’d have to sell it.

One crazy watercolor from an insane man on the side of a bridge in Budapest. Don’t know what it says. Love it. 1,000 forints = $5 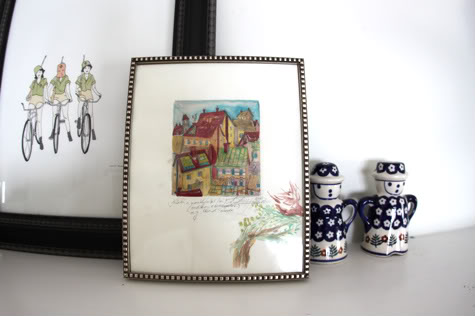 I don’t know what this piece of furniture is supposed to be. It’s super run down, the top lifts up on hinges, but it’s not deep enough to fit bar stuff, has no holes for record player wires, and wouldn’t fit a sewing machine, but it does a good job of holding stuff. $30 at a swap meet. 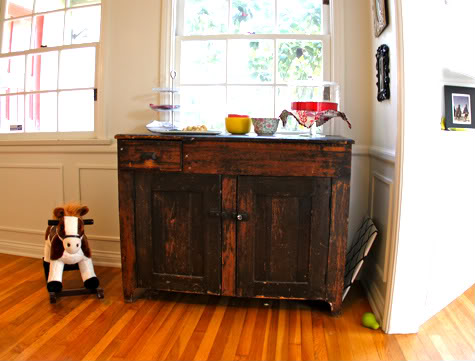 Oh, and my mom picked up that rocking horse for $1 at a yard sale. Once, and only once, it made a neighing sound. We can’t figure out how to get it to do it again.

George Washington cameo, you’re tiny and weird and I love you. Picked that up somewhere in berkeley during college and it’s followed me around ever since. 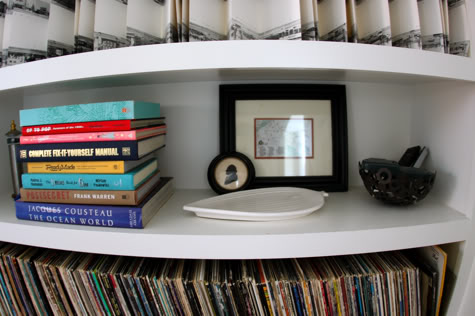 This painting is on glass. I found it at a thrift store in Corry, PA on a family vacation. It was $1 and it says 1936 on the back. The frame is falling apart, I guess I could re-frame it but should I? 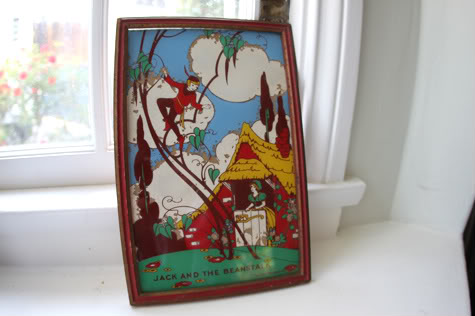 So there’s some cheap stuff i bought that I love. What about you?

I think that odd piece of furniture you have is an antique commode 🙂 It is very cool!

You could have brought me a pair (the white owls) as a hostess gift when you came to visit us in March. I'm just saying.

i love your swap meet piece. do people always assume the scarlett namesake? people always think we named hendrix after jimi, but we didn't. so we kick those people in the shins.

jacinda, now i know what to send your for your birthday!

kristin – really?? how would that work. hrmm. it has a shelf inside of it and two doors on the front with some sorft of weird locking mechanism. the shelf inside looks like it came with it originally. the top part is about 6 inches deep. and its pretty annoying to keep anything in there because I have to move everything on top to get to it.

jessica i dont know if they assume it but everyone says "MISS SCARLET!". my husband picked her name before i did and he's never seen or read gone with the wind (no matter how many times i have tried to force him to) but i love it and i think it's ok that people think that. but i would kick them in the shins anyway just because i love kicking people in the shins.

I LOVE the captain's wheel. The other stuff is mighty fine, too. 😀

We have the same rocking horse! If you press the ears, it should neigh. The battery pack is on the underside. Although, I will caution (as I always do on electronic toys) that if it does work, the kids won't let it stop!

We also have that rocking horse. Our battery pack is on the back of the neck under the mane. One ear neighs and the other plays a song.

Jaime,
You are the proud owner of a dry sink. Before indoor plumbing people would keep a shallow bowl filled with water on the little shelf under the top to wash their face etc. I guess the bottom could be used for keeping towels or something. My parents have one. That is a fun piece of history you have. You are a great bargain hunter.

Your mystery furniture is a dry sink! My grandma had one that I always loved.

this so fascinating about the dry sink!!! thank you. i'm going to dissect the horse as soon as miss s goes to bed. will report back.

omg, the horse! are we just dumb? one ear neighs and the other ear plays "home, home on the range". and the battery pac is buried deep in the belly. THANKS!

Ok, so how to I buy the blue owls (with green bellies?) off of you! I have to find myself a set of those!

I needed this inspiration! I'm on my way to an annual flea market this am, at a neighborhood park. Hope to find some good swag!

Jacinda- if you get tired of the white owls, send them my way! : ) ha ha i was scopng them out too! and the horse story is too funny! cant believe Scarlett didn't tell you "it needs batteries mommy!" that is a line we hear a lot in our house : )

Hi Jaime, I am a new Prudent Mommy as of 7 weeks ago and I just love stalking your blog for ideas for my daughter. The place that I love to go to for inspiration and interesting pieces is Main Street, Ventura, CA. Along Main Street are many antique, thrift, and other random shops, also the Ventura Mission has it's own gift shop that has mini statues of saints. The best things I ever bought along Main Street was a pair of vintage leather gloves for $3, a set of place mats from the 70's for a $1, an old tattered nursery rhyme book dated 1921 for $5. Major steals!

This post is awesome! And proof that someone's trash really can be another person's treasure, especially if you know what to do with it. 🙂

I love old books and buy them when I find special books like your copy of Gone With the Wind! They seem to have so much history – I love thinking of the people who read them before me.

i have lots of cheap stuff that i love! just this weekend, i bought a 9 ft. bright yellow sectional sofa, yellow lamp, & 2 nesting tables at an estate sale for $120. unbelievable!

bethany – ventura is THE BEST! those thrift stores are AMAZING. i haven't been in years but i do have a weekend coming up with a babysitter (in laws) in town so i am trying to convince my husband to take me there….for some reason he doesnt think "thrifting' is the best use of our time off?? what's wrong with him??