This is How to Make a Watermelon Keg and Agua Fresca Recipe. 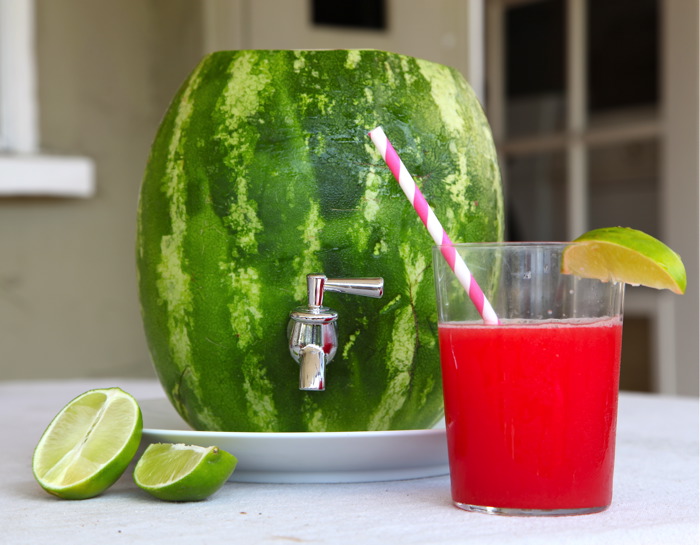 This watermelon “keg” was our gift to Carleton for Father’s Day yesterday. That and some really dorky scones. The watermelon drink dispenser was totally simple to make – the hardest part was finding a tap, but I figured out a solution for that. Scarlet helped with scooping out the watermelon flesh, which we used to make some popsicles as well as the refreshing batch of agua fresca that we served inside the melon (can we get a what-what for hot pink juice that is 100% natural?). 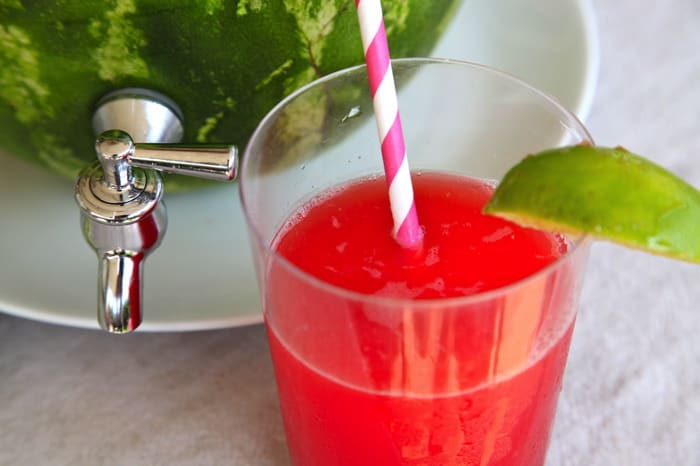 Of course, dad and I later used the aqua fresca to make Watermelon Mint Jalapeno Mojitos, but that, my friends, is another post. However, the watermelon mimosa that I shared on facebook, well that’s self explanatory.

Find out how to make a watermelon into a keg/drink dispenser and get my super simple (every kid will love it, and almost every parent will love to spike it) watermelon agua fresca recipe…

So according to this DIY by the people who grow watermelons, you’ll need a watermelon. An ovalish one is a good idea, and seedless will make your life a little easier (but not much easier, so if ya’ got a seeded watermelon, go for it). You’ll also need a spigot. That’s hard to find, so I took one off my mason jar juice jug ($15 at Cost Plus World Market). I can tell you that they do not sell spigots at Bevmo, SurLaTable, World Market, Target, Bed Bath and Beyond, or any other store that is near my house. So, if you have a drink dispenser, look closely and you’ll likely see the spigot unscrews – bingo. 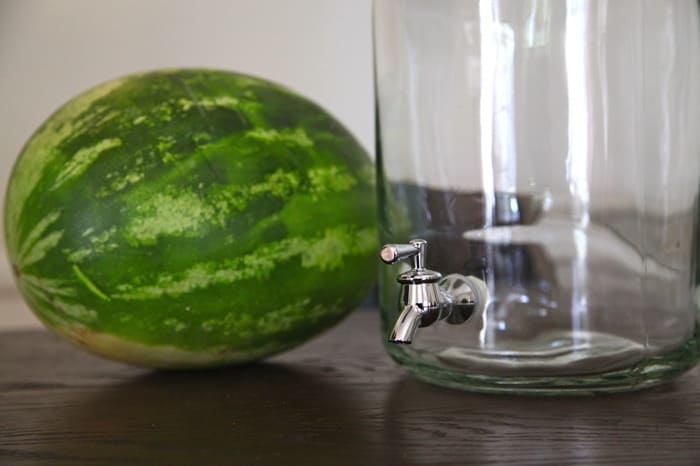 It’s quite simple to screw off. Here’s all the parts. Screw, bolt, washers. 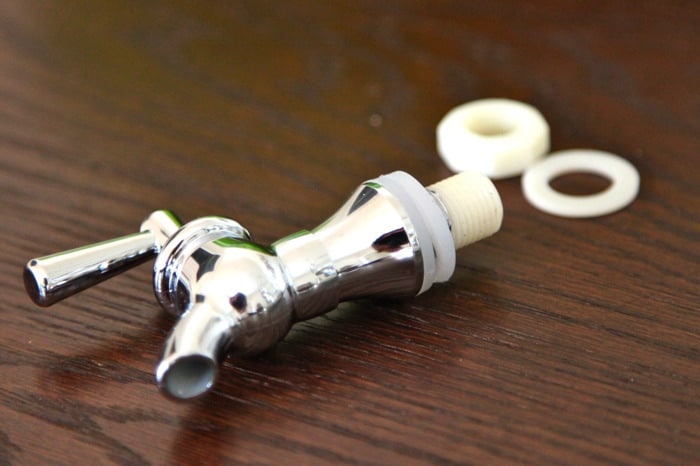 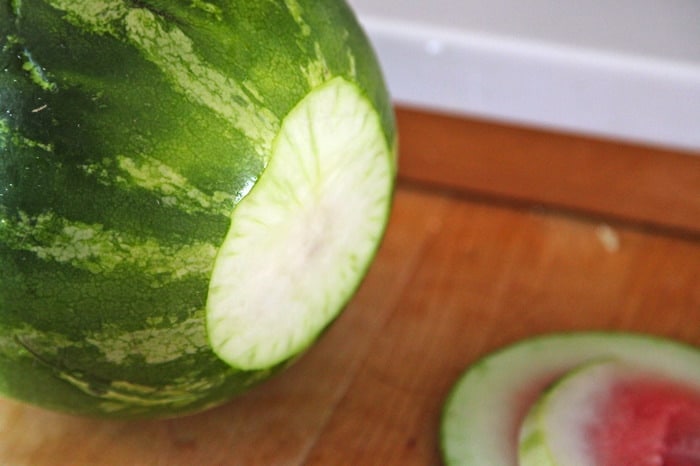 Slice a bigger chunk off the top. It doesn’t have to be this big, but a big opening makes it easier to have your kid help scoop out the flesh. 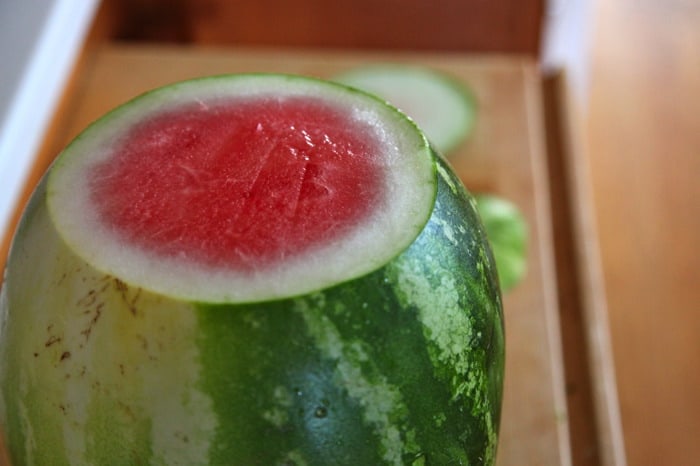 Now scoop out the flesh. 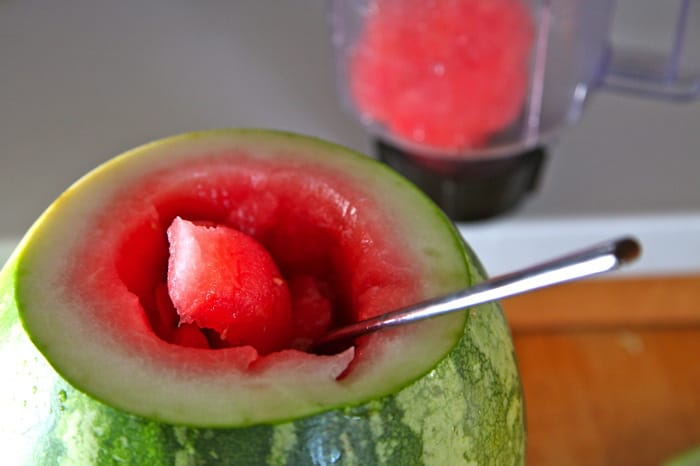 I removed it directly to the blender. 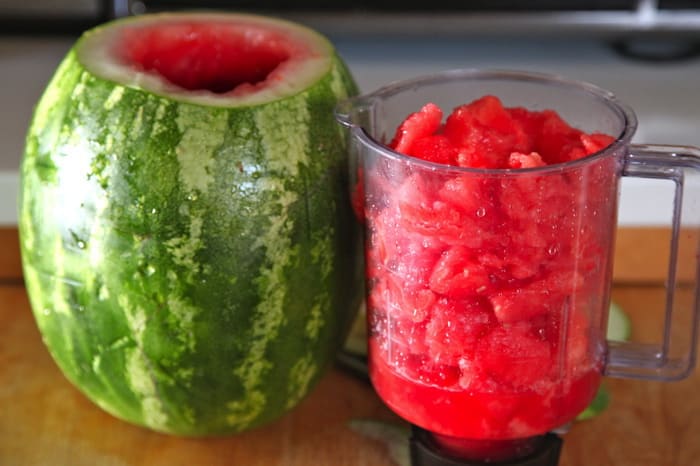 Ragamuffin helper and I with our pureed watermelon. 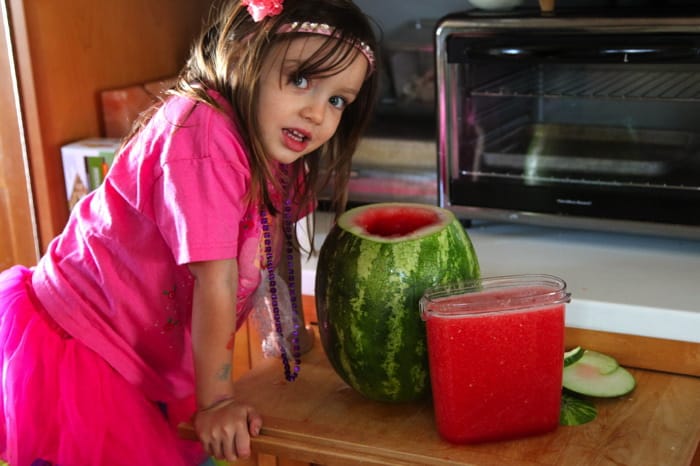 Run the blended watermelon through a strainer to get the seed bits and chunks out. 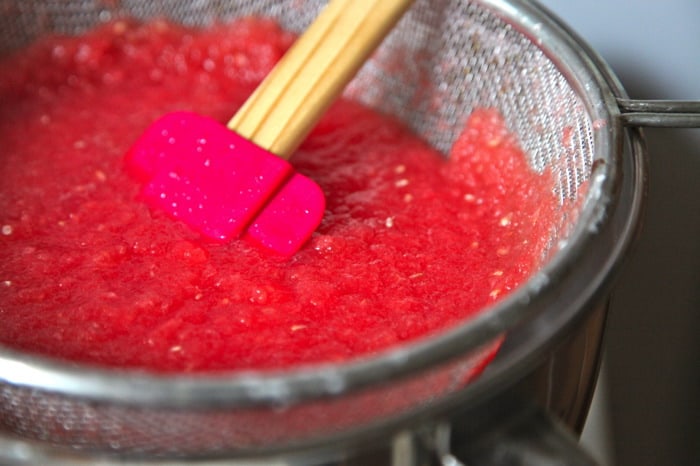 At this point we had to pause to make popsicles. 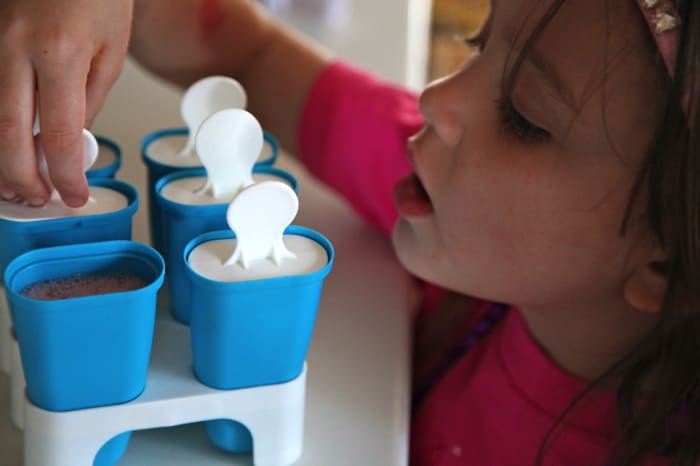 Back to our watermelon keg. Use an apple corer to create a hole for your spigot. 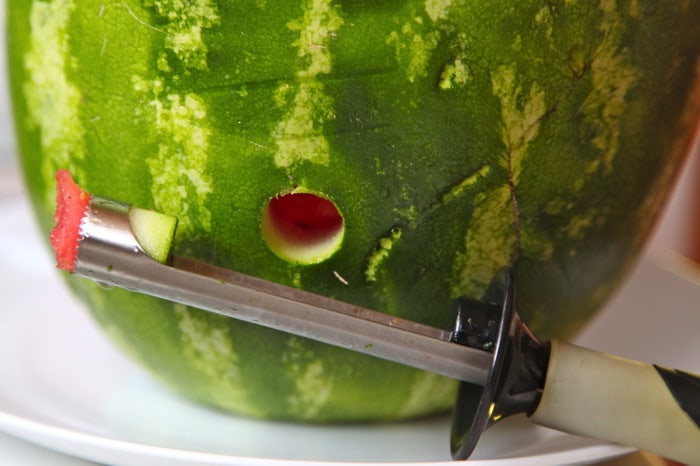 Screw that baby into place. 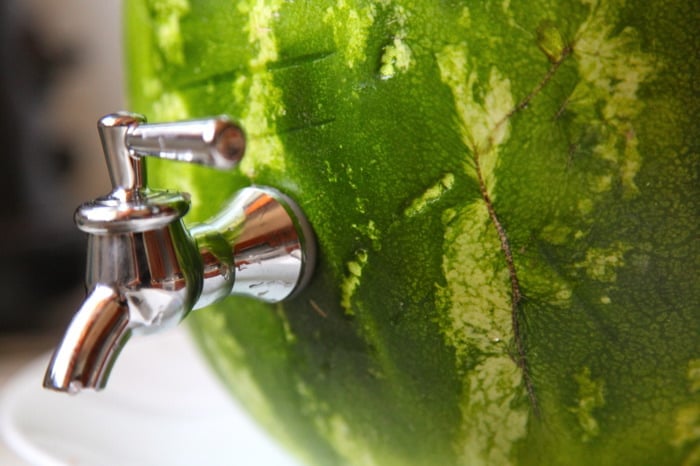 To make watermelon aqua fresca, mix the watermelon juice with the juice of half a lime (or more, to taste). Taste, if it needs more sweetness add a tablespoon of sugar or simple syrup at a time. Pour it into your watermelon. If no children are present, add vodka. Done! 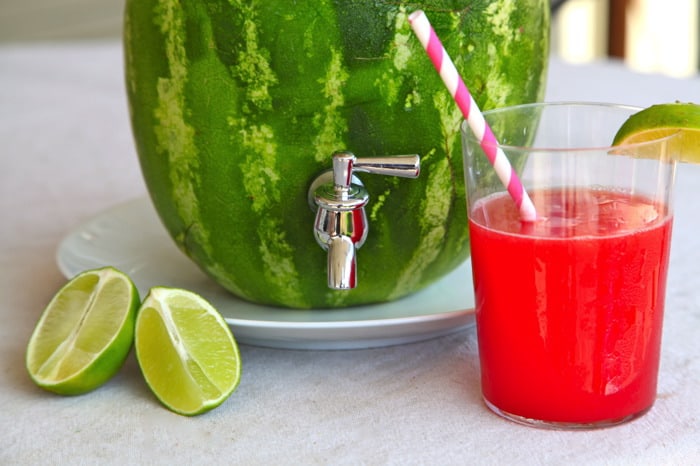 You have to try this for a summer party. Don’t do it for me, do it for the children. They really, really want to drink from a watermelon. At least that’s what they told me.

wow, can NOT wait for the next barbecue to try this baby out, i’m thinking one for the kids and one for the mammy’s!!! (shall have to make sure i mark them properly to avoid dangerous accidents!!) thankyou so much for this one, am already googling keg taps!

I’ve wanted to do this forever. Is the tap really slow? My containers with these plastic taps are already so slow. Great idea using an existing cap.

This will for sure be on the menu for my daughter’s birthday party!

Oh man, this is awesome. I will definitely be making one of these.

OH! So doing this for my sister’s 30th birthday this weekend – if I can find a drink spigot! Thank you!! Love this blog! <3

This is great! Aria loves watermelon; I bet she’d get a kick out of drinking from one!

Way to tap that thang. (Oh yeah, I went there.) Thanks for the tute. I am all over the watermelon agua fresca. It is my husbands favorite. Way to go. xoxo

OMG! How creative! If I go to a party with this keg…I would drink only from this keg..

AWESOME! That is all!

Wow. That is just SO awesome. Perfect thing for any party as long as you don’t forget to bring that spigot home again. Thanks for showing us.

I gave this a test run about a month ago. While I loved the concept, I had a little bit of leaking around the spigot that made the whole thing a little messy. http://www.thebookofjimmy.com/the-book-of-jimmy-the-thesis/ I didn’t use the nut and gasket on the inside of the melon though – which is probably the culprit. I tried to make mine by cutting the hole just a little smaller than the threads in the spigot then twisting it into place. After a few pours I stripped the threads in the melon, and well, in came the mess.

I found replacement spigots on Amazon for four bucks a piece – worth doing if you can wait for it to ship before. I also made a basil and rum cocktail to fill ours, which was amazing.

So glad to see someone else tried it! We got a bit rough with ours and split the plastic nut on the end of it after a few keg refills which caused ours to start leaking, so I suspect you’re right about skipping the grommet & nut at the back of the spigot causing leaking 🙂

Wow!!! This looks fun to have for when we have our summer luncheon at the preschool!!! 😀

this is only way i will drink/eat watermelon.

WOW! That is the coolest idea ever! Love this 🙂

Looks refreshing…gotta give this a try!

Wow Great for idea for the summer.

I found the taps for cheap on Amazon if anyone is interested. http://tinyurl.com/7dzz6lb. Going to try it this summer for sure!

Spigots are easily found at any restaurant supply company.

You could also find them where they sell water

[…] Kelly will you make one of these Watermelon Kegs for us when I come visit? Share this:FacebookTwitterEmailPrintLinkedInDiggLike this:LikeBe the […]

We’ve been doing that s for a while with watermelons and pumpkins during Halloween.the best spigots for the job can be found and bar and beer brewing supply stores. Expect to pay around 20 for the right set up, you’ll need the tap the threaded insert a bolt and two gaskets. Seal the inside around the gasket with paraphin wax. Freeze the fruit to keep it from developing food born illness.

check out this for how to make atap http://www.instructables.com/id/Pumpkin-Drink-Tap/

[…] seeing this link via Facebook, I simply couldn’t resist trying to make my own watermelon […]

Thanks for sharing this brilliant idea! I made a watermelon keg the other week (after being inspired by you) and linked to this post from my blog.

Soooo lovely and I love the idea very refreshing.

Hey there! Would you mind if I share your blog with
my myspace group? There’s a lot of folks that I think would really enjoy your content. Please let me know. Cheers

[…] How to Make a Watermelon Keg (also included is a watermelon agua fresca recipe!) […]

Save the tea jar spigot. Cut the taps out of wine in a box bags and use them.

hey. I think they sell the spouts at your local beer making supply house.. give them a call… great idea for our annual 3 day camp out at our home here in the mountains in August!! thanks!

[…] a watermelon keg for your next get together. Pretty Prudent will show you […]

Hundreds of volunteers in theater tickets in london england the West.
The following few lines will give you some background.
To popularize the film, the events are available on a first come,
first serve basis. Solo fireworks come from Lonnie Hillyer trumpet, Charles McPherson alto sax and Jaki Byard piano; Mingus’ long-time drummer, Dannie Richmond, holds down the fort.

[…] in natural items if possible. Watermelons are great for carving out the fruit and using as bowls, kegs, and more! Just Google Image “watermelon sculptures” to see the endless talent and […]

I made it for my friends and it was totally delicius and beautiful. Great and tasty table decoration 🙂 But be carefull 😀 Even I bought small watermelon we had enough not only for us (4 people), but if we were 20 it will be still enough. I was eating rest of it for whole week 😀

[…] Have a spicy adult drink option with Watermelon Jalapeño Mojitos or a watermelon keg. […]

[…] thinking about throwing a fiesta of your own, you might want to add in musical DIY cascarones, a Watermelon Keg, and Agua Fresca to the […]

[…] 3. Put it in a keg! These and any drink, would be 10 times better coming from a watermelon keg. Find instructions at Prudent Baby. […]

[…] is such a fun idea from PrudentBaby.com for turning a regular watermelon into a beautiful drink dispenser that will amaze your friends and […]

[…] Please choose to like OrganizeKC on Facebook and keep up with great new articles to better organize your home and life. In addition, you'll receive immediate and FREE access to my eBook "7 Steps to Getting Organized for Real!" just look for the "eBook Here!" tab on my Facebook page. Enjoy! Source […]

I’m not that much of a internet reader to be
honest but your sites really nice, keep it up! I’ll go ahead and bookmark your website to come
back down the road. All the best

You can find spigots on Amazon for $6-7 and if you have Prime, they ship for free!
I can’t wait to try this!

[…] How To Make A Watermelon Keg – Turning a regular watermelon into a beautiful drinks dispenser that will amaze your friends and family…sounds like an amazing idea to us! […]

[…] Watermelon Keg – Create a keg that nobody will ever forget, it’s fun, easy and delicious so you’ve got everything covered. […]

Amazon sells all kinds of spigots.

[…] How To Make A Watermelon Keg – Turning a regular watermelon into a beautiful drinks dispenser that will amaze your friends and family…sounds like an amazing idea to us! […]

[…] I love watermelon and now I have much more makes use of for it. Here’s the tutorial… PrudentBaby – How To Make A Watermelon Keg (And Aqua Fresca, too) Image Credit: […]

[…] it at that when you can also use the fruit to pour yourself a cool, refreshing drink? Jaime of Pretty Prudent teaches us a thing or two about using every part of the summertime staple by turning her rind […]

[…] For this watermelon hack, find a giant, oval-shaped watermelon, scoop out the insides, add a spigot, and just like that ,you’ll have yourself a homemade keg! Fill it with your favorite large-batch cocktail or punch. Find the recipe here. […]

This sounds so yummy! Gotta try these!! Thanks!!