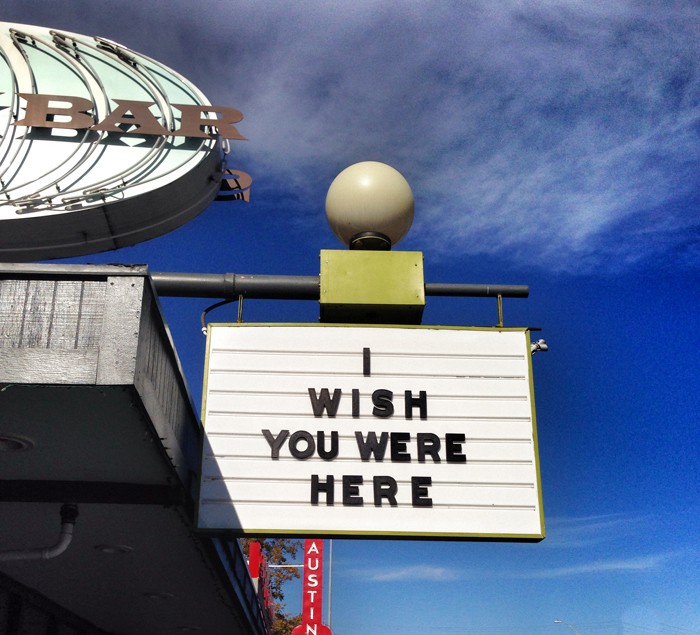 After a highly productive book writing trip to Palm Springs last month, Jaime and I planned to regroup in Austin for another session before the holidays. With a motto like Keep it Weird, Austin was an obvious choice for Jaime and I. While our intense self-imposed schedule didn’t allow much time for me to show Jaime around my beloved home-away-from-home, we were able to sneak in a fabulous dinner at Trace courtesy of the W Austin Hotel, drink many delicious lattes at Jo’s, and treat ourselves to a few hours of shopping (a-hem book research) including a stop at my favorite Austin vintage emporium, Uncommon Objects. 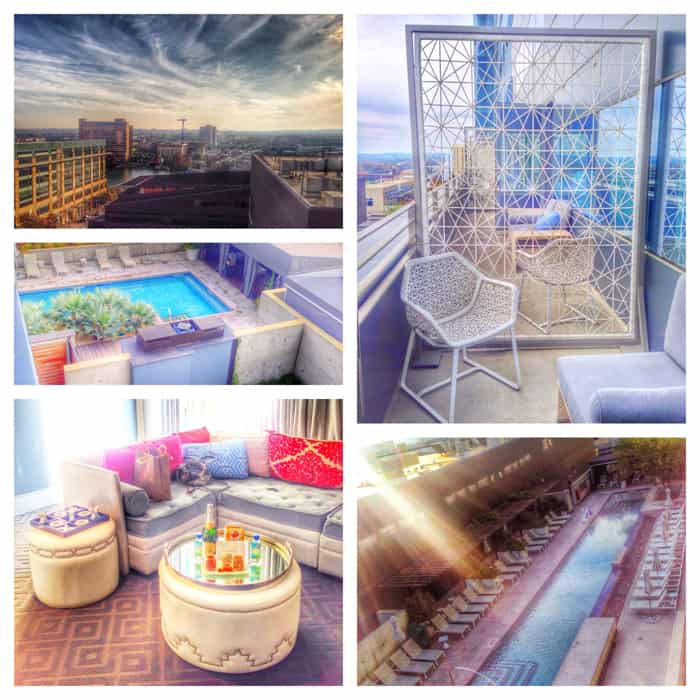 On our first night in town we stayed in a gorgeous corner suite at the W Austin Hotel in downtown. The hotel was decorated beautifully for the holidays with tiny succulent and glass bulb arrangements. 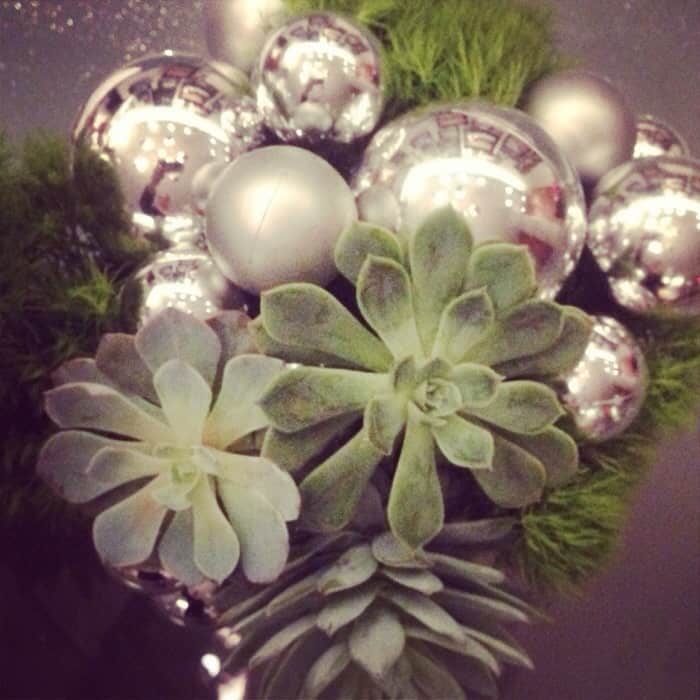 Refreshing Orange-Cinnamon-infused water was waiting by the front desk, where they feature a different flavor each day. That’s one way to get inspired to drink more water in 2014! Jaime and I met up in the room, had a sip of champagne (obviously) and headed downstairs for dinner. 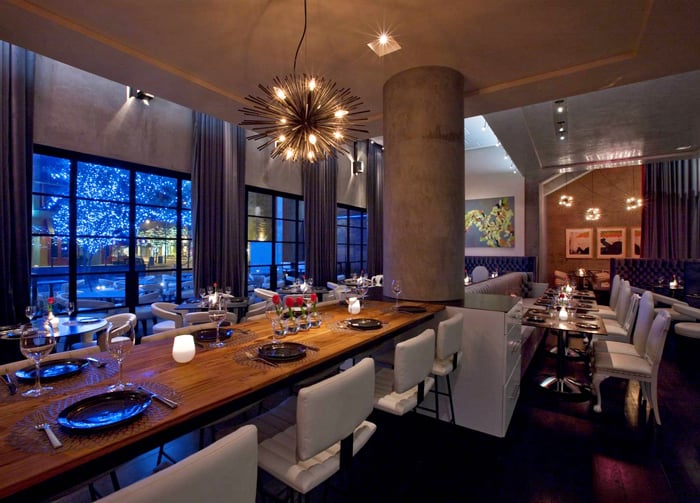 Isn’t Trace beautiful? After being treated to a gorgeous charcuterie plate featuring house-made artisan meats, we feasted on Crispy Crab Cakes, Seared Diver-caught Scallops, Tuscan Kale Salad, Mac & Cheese, Brussels Sprouts, and a scrumptious House-Made Pasta with Rabbit Ragout. In addition to a Chef de Cuisine, Trace employs a professional Forager (I think this will be my next career) who sources local ingredients from nearby farms, and cheeses, cured meats, jams and even hot sauce from artisanal producers.
We had an awesome waiter who was not be stumped when we threw a few tourist/Austin trivia questions at him. He also suggested that for an amazing and uniquely Texas dining experience, we try the Wild Game Trio the next time we found ourselves at Trace. Yes, please! As we headed back to the room, I noticed a few more gorgeous succulent solutions. These in-set wall gardens were lit with the most beautiful purple/blue hue. 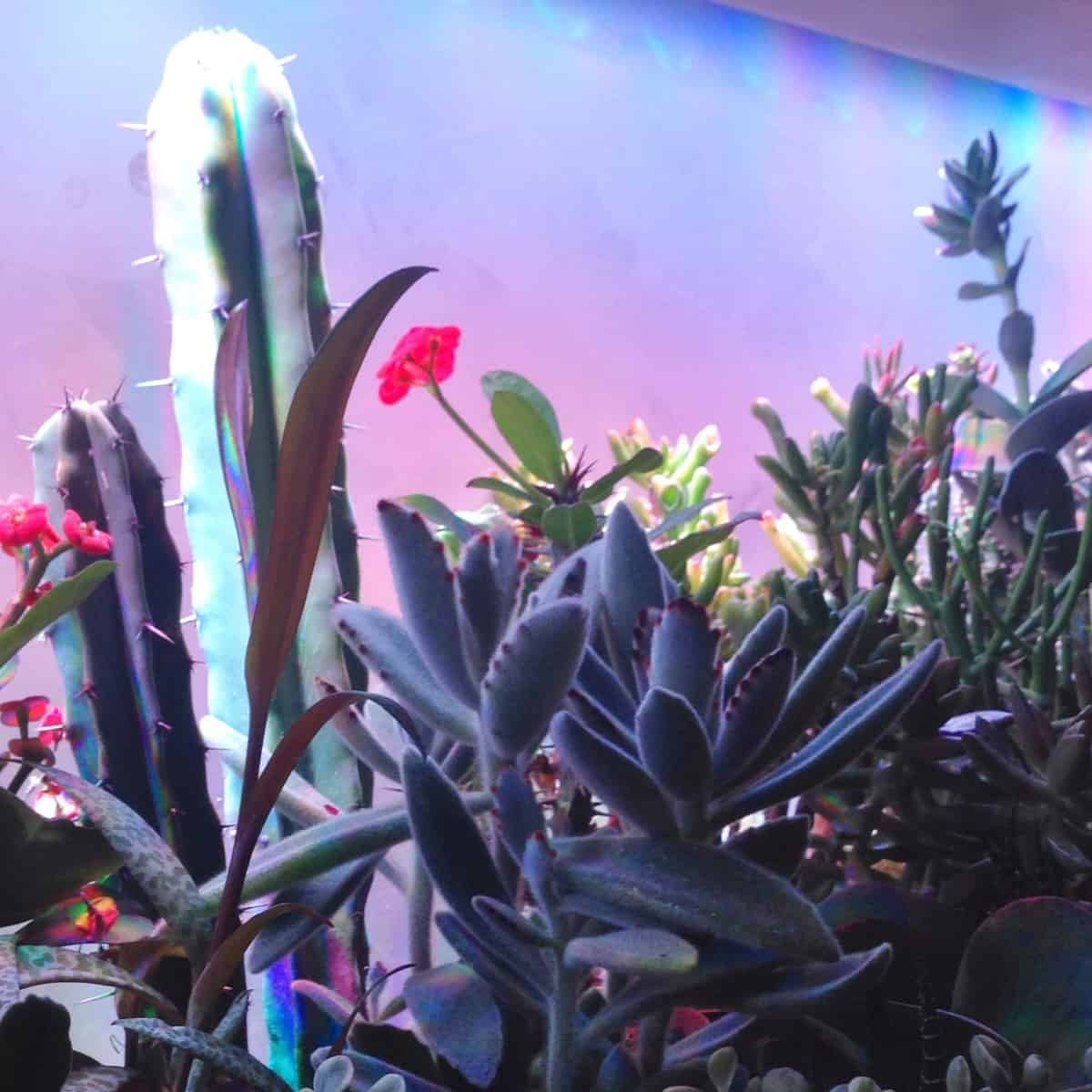 Upon closer inspection I noticed that the plants were not actually planted in the planter but set in the case in individual pots which were disguised with moss. Ahh, an excellent solution for my own outdoor succulent bed which has been victimized by one too many Texas ice storms this winter. Next year they will Winter in the house!

Back in the room, we discussed our plans for the next two work days (it’s a good thing we love what we do as we sure do a lot of it) and I took a closer look at the details in the room. There were many inspiring, creative and functional touches. I love this etched mirror frame on a basic clip bathroom vanity mirror. This would be so easy to do with the Silhouette Glass-Etching Kit, or even with cut vinyl for a temporary version. 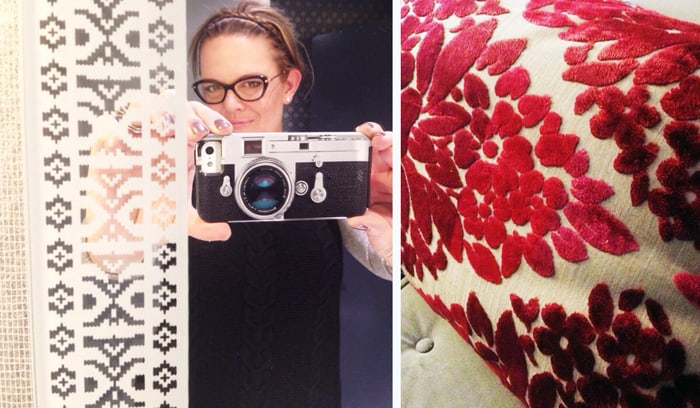 The sleek modern decor was given an elegantly bohemian flair through the use of luxury fabrics like this unique velvet on tan linen brocade. I want some. But they really warmed my techie heart with the charging station on the nightstand with the three most common plugs right there for me to use. RIGHT THERE WAITING! Um, nerd.

The next morning brought a few productive hours of writing in the room, followed by a move to the Living Room for lunch and more progress. The Living Room is the W Austin’s 4-room lobby bar/lounge/work & meeting space with cozy nooks and fireplaces, killer cocktails and a to-die-for appetizer menu. I could live there.

From there we packed up and moved over to our next stop at Hotel San Jose. You know I love that place too! We plowed through work, we ordered in pizza, we plowed through more writing. One of these days I want to travel with Jaime and not write a book, but if you have to write a book (which we definitely do) it doesn’t hurt to do it in a window seat at Hotel San Jose in Austin… with a latte from Jo’s. 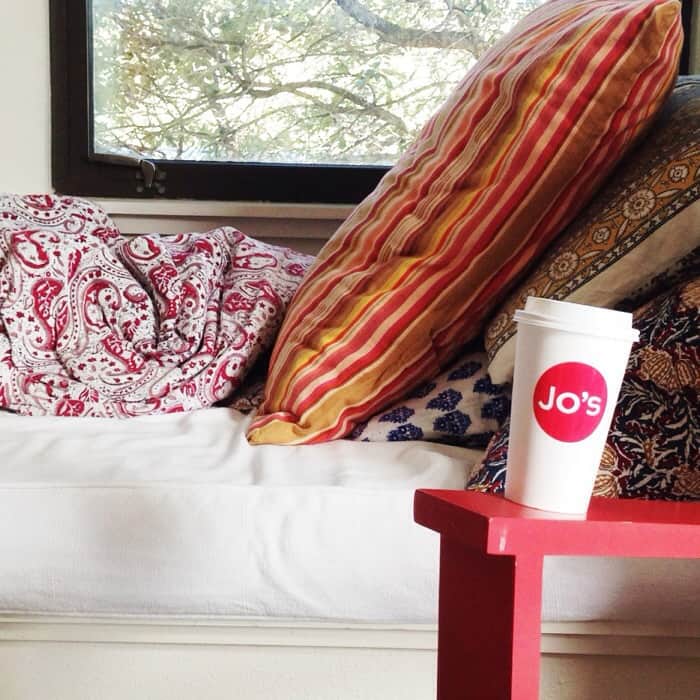 The next day brought more of the same but with the promise of a few hours off in the afternoon for good behavior. We wisely used our free time to peruse Uncommon Objects and a few shops on South Congress. Obviously a wise decision as I found all these things I needed… 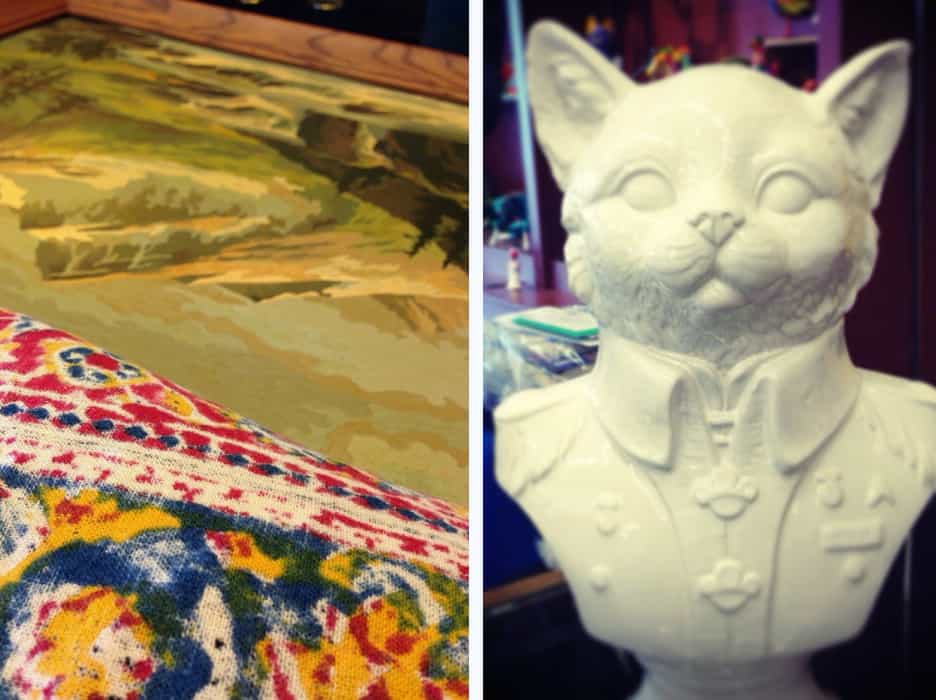 After a great sleep, and a U-Haul pickup (to grab my newly reupholstered furniture from Spruce!) I couldn’t help but return to Uncommon Objects for a few of the treasures I had left behind. I snatched a giant G for Gordon’s room and I was also hoping to find a few inexpensive oil paintings. By chance, one of the vendors was there and he gave me a super deal. I was feeling happy. Vintage shopping always makes me happy. Deals make me happy. Cool people who give you a deal make me happy. They make me happy, and chatty apparently. 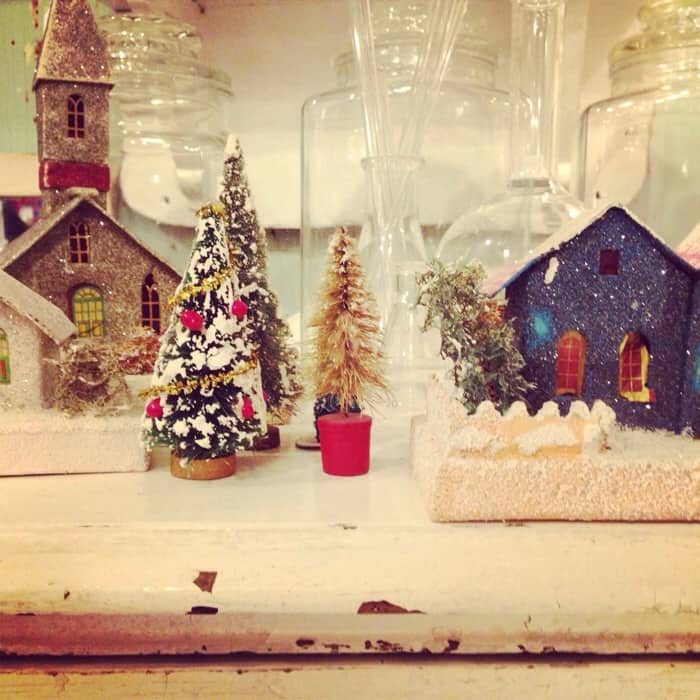 Feeling happy and chatty, I walked to my third booth to contemplate some vintage Christmas houses with which I had fallen in love but passed by the day before. I noticed that my three favorites were gone. Oh well, can’t snooze when it comes to thrifting!  I headed up to the counter to make my purchases when I noticed that the woman in front of my was buying the three houses. This next part might seem strange but I couldn’t help but mention to her that I thought they were beautiful and that I had noticed them the day before and had come back to take a second look but that she had beat me to them. This is not all that strange (ok, maybe it is strange but not uncommon) because I find an excuse to talk to the people in line all the time.

Anyway instead of accepting my compliment on our shared good taste and heading on her way with her pretty little houses, she wanted to let me buy them instead. I insisted that she not do that. Then she wanted to go exchange hers for others so that I could have my favorites. I insisted she not do that. Now I was really feeling bad that I had even mentioned it, she really didn’t want me to leave without tiny glittery houses, so I went back to the houses for another look, the woman followed. I decided that I really did love the church even though it was more expensive and also picked out a cute little house. We returned to the counter and I felt good knowing that I had made my new friend feel better about going home with her purchase. But then I was outwitted by her quick Christmas Elf ways and she swooped in and bought the church and the house for me. At that point I was forced to embrace her generosity, I thanked her, handed her my business card (I wasn’t going to let this special lady get away) and we parted ways.

I hopped in my UHaul and started my trip back to Dallas when I noticed I had a phone message. My new friend Debbie was still feeling bad about the Christmas houses and wanted to meet up to give them to me! If I hadn’t already been on the road (and already taken advantage of her amazing generosity) I would have had to meet for coffee. When do you get the chance to meet someone with such a giving heart? What an inspiration she was, especially as we were headed into the holidays. Speaking of which, I still owe someone a pretty serious pay-it-forward. Hmn…

Next stop on the Jaime and Jacinda Book writing tour… Salt Lake City for Alt Summit! Will you be there? Let’s high five!