We are still drooling over Jaime’s Tween Girl Bedroom Remodel Before & After! 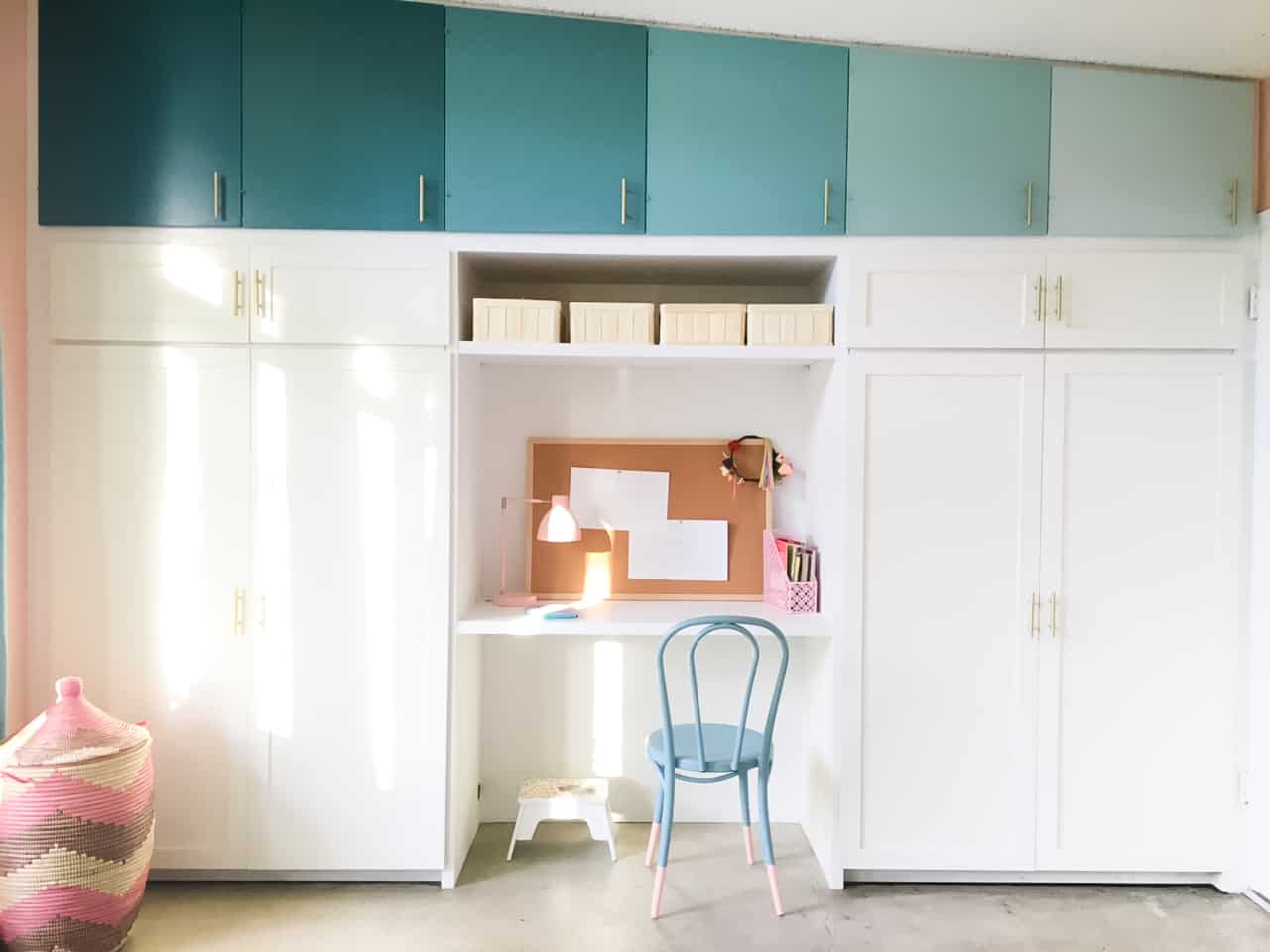 When we bought our mid-century modern house a couple years ago, it had great bones but needed some serious work. Scarlet especially wanted her room to be fixed up of course. It had greenish-brown shag carpet that was 50 years old (gag). She said “It looks and smells like barf.” She wasn’t wrong. The door opens to the pool and 50 years of moisture coming in and out, well… It had to go. The room also had a wall of mirrored closet doors – the kind that are supposed to slide, but never do because they are always stuck. So, because it was unsanitary and dysfunctional, we decided to give this girl a bedroom makeover without breaking the bank.

Here’s what we did! First order of business was to pull up the carpet, and the tile that was under it, then sand down the glue to the cement underneath. A good polish and a sealer and we have shiny new floors. Once we get all the carpet up around the house, I’m going to have a new layer of cement poured throughout the house to fill in the cracks for a nice even appearance. 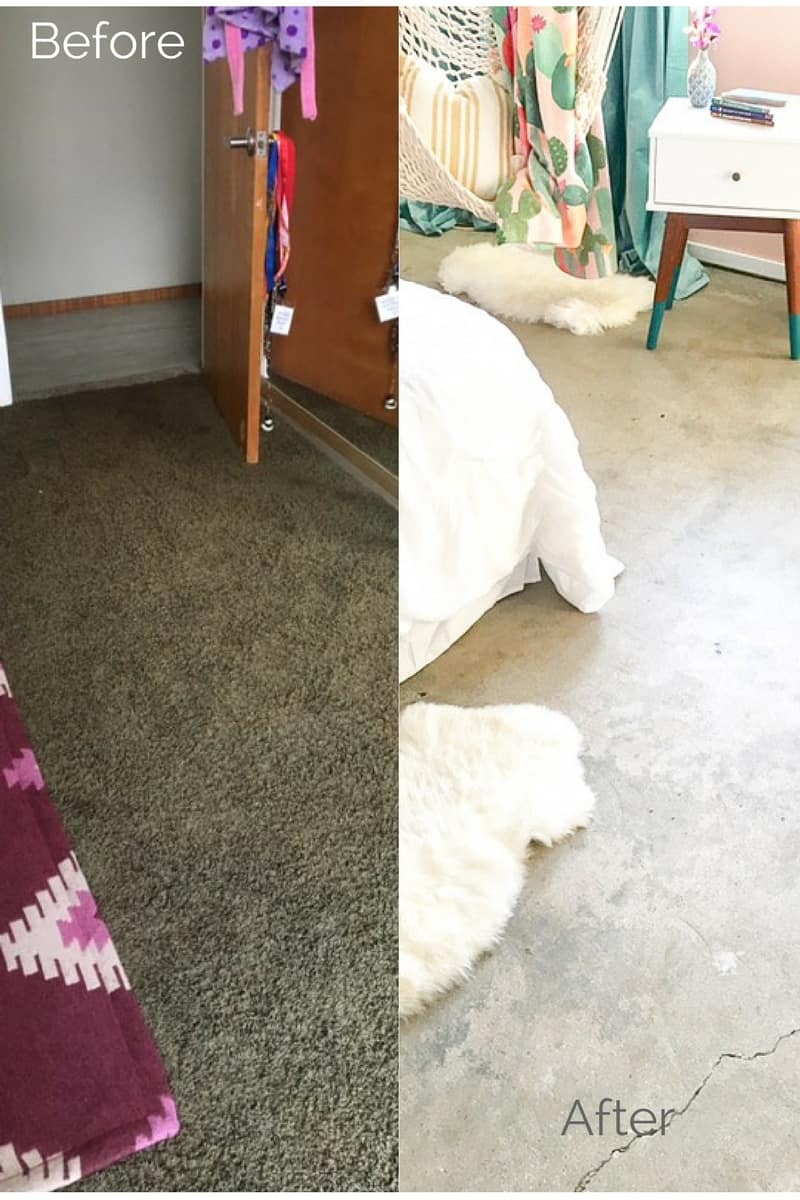 Then we ripped out the mirrored doors and semi-useless shelving and built-in drawers behind them. There is a ton of closet space here, so we re-purposed the center area into a built-in desk. Scarlet LOVES her desk so much. We also added handles to the original cabinets above and gave them an ombre paint treatment. 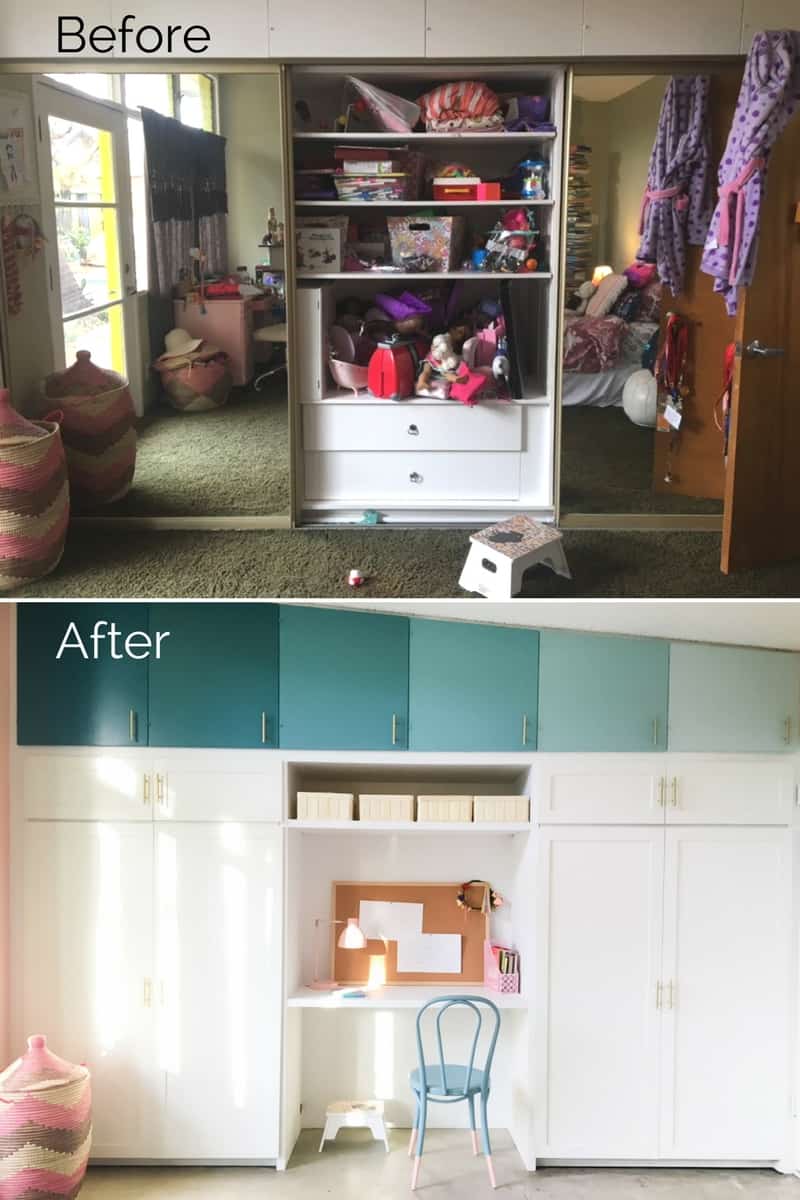 You can see in the before pictures that we had all of Scarlet’s furniture that looked great in her room at old our house, but just did not work in here. It was time for a bigger bed, some more bookshelf space, and a cozy place to sit. Since she now had a built in desk, she didn’t need her old one (which she had grown too tall for anyway). So goodbye old desk and small bookshelf.. 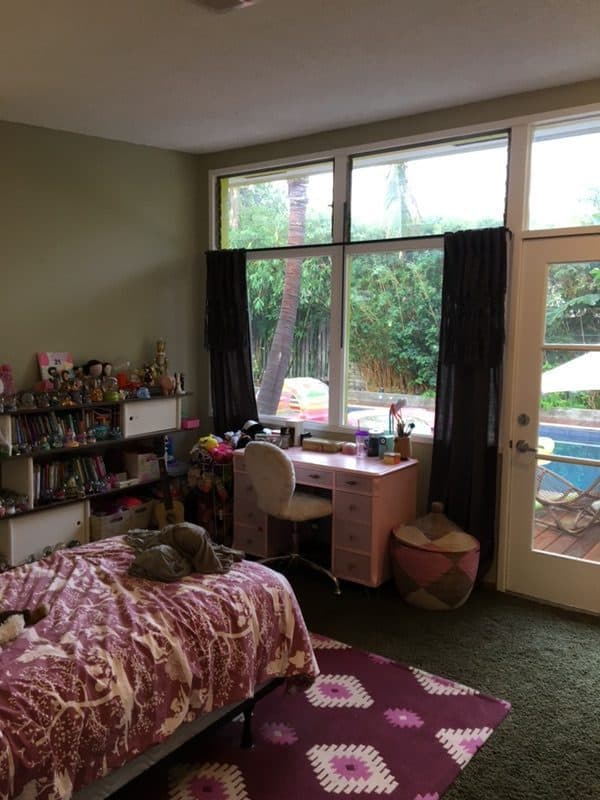 Hello hanging hammock chair and wall mounted shelving. We also hung the curtains up higher, all the way to the ceiling, and hung some Ikea velvet curtains to the floor. They could use a hem, but I still haven’t gotten around to that. I absolutely love the Max Wanger photo on the wall of the palm trees. It mimics the view outside and just makes me want to celebrate our home town of Los Angeles. This is starting to feel like the ultimate Tween Girl Bedroom Remodel Before & After! 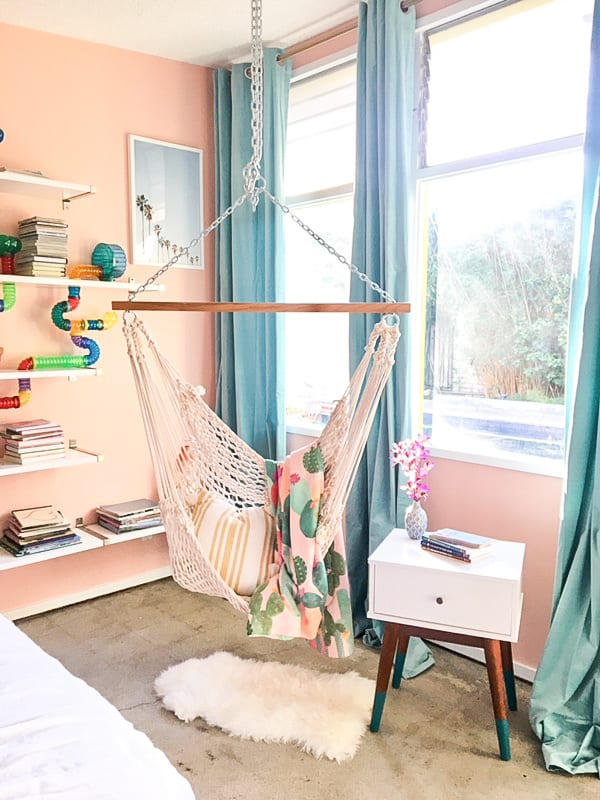 Of course her hamsters (p.s. do not get hamsters) needed a cool place to live. Check it out: HAMSTER PARADISE. We drilled holes for the hamster tubes to run through the bookshelves. Now they have a giant world to run around in. Not the easiest to clean, but pretty cool to look at. 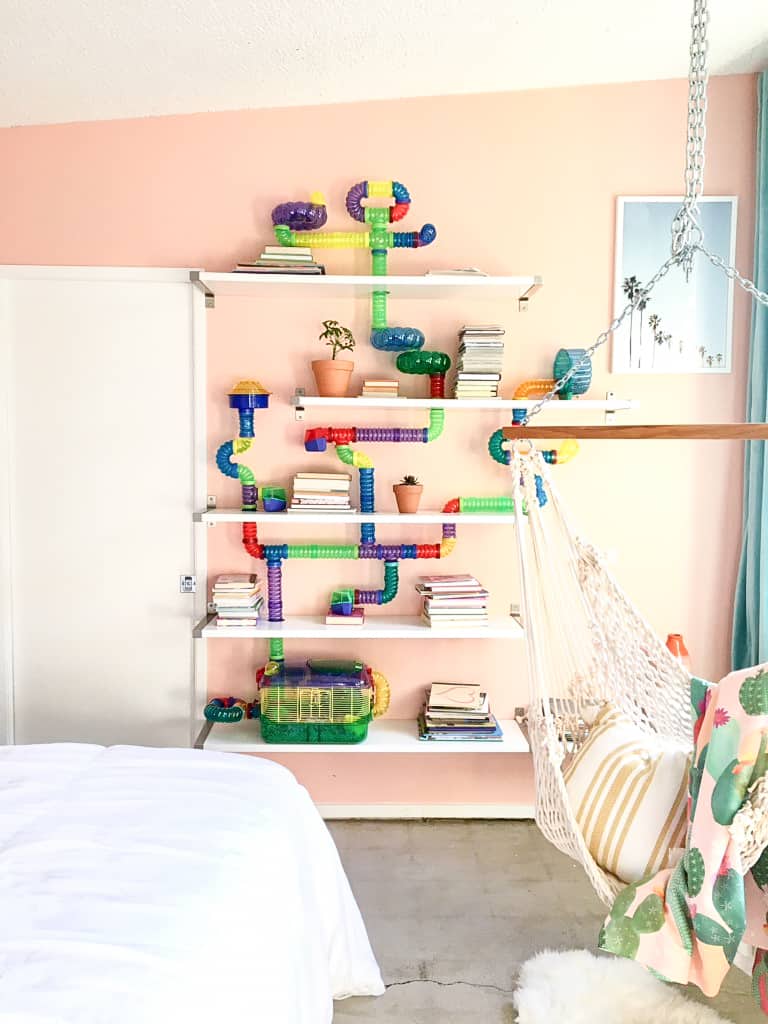 Her twin bed was so cute, but it was time for a bigger one so we could snuggle together and read stories at night. She also needed some more closed storage, in the form of nightstands with drawers. I mean where else is she going to keep all the slime she is constantly making? 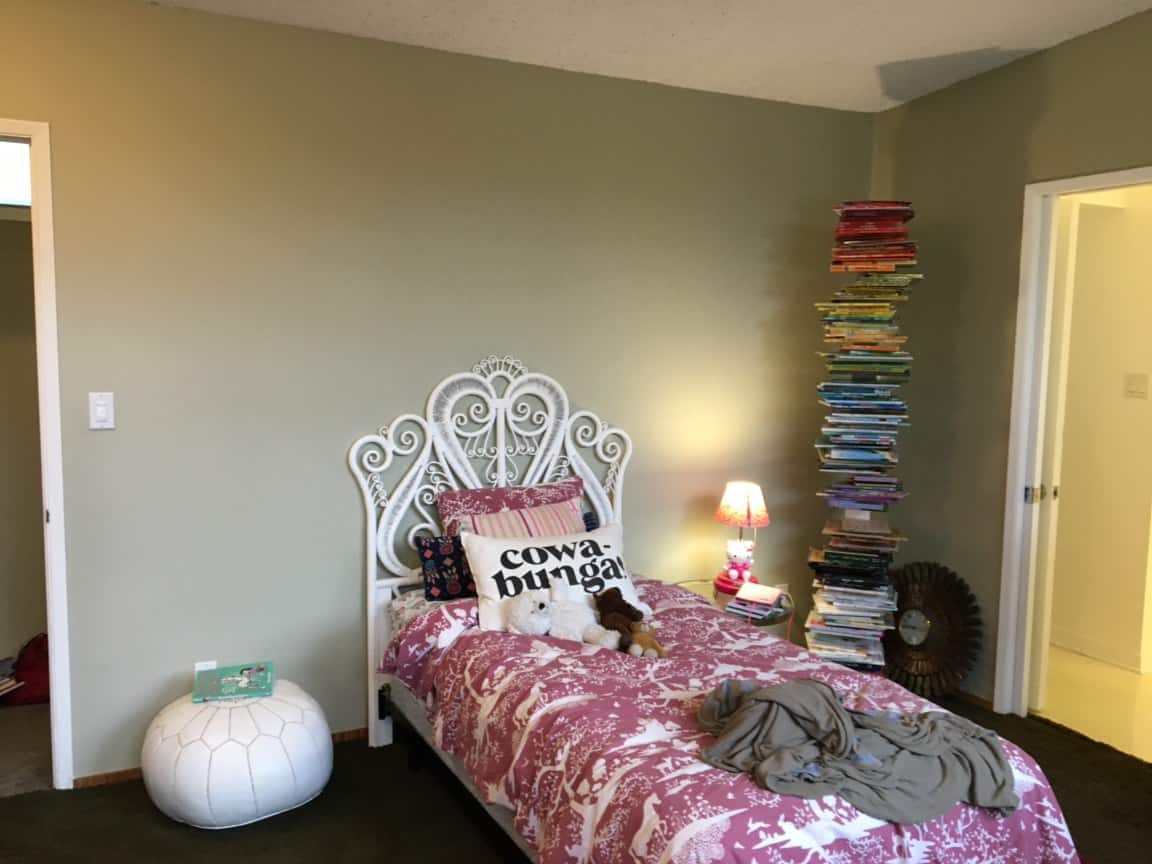 Voila! And a new coat of pain in a pale blush pink (Valspar HydroChroma in Coral Buff flat) made her so happy. The headboard is from Overstock, the end tables from West Elm. The wood engraved wall hanging was a project from our book, Pretty Prudent Home. The artwork above the bed we made, it’s a faux neon sign that says her name and lights up, but I decided it was way too heavy to hang above her bed, so we’ve since taken it down and replaced it with some macrame. 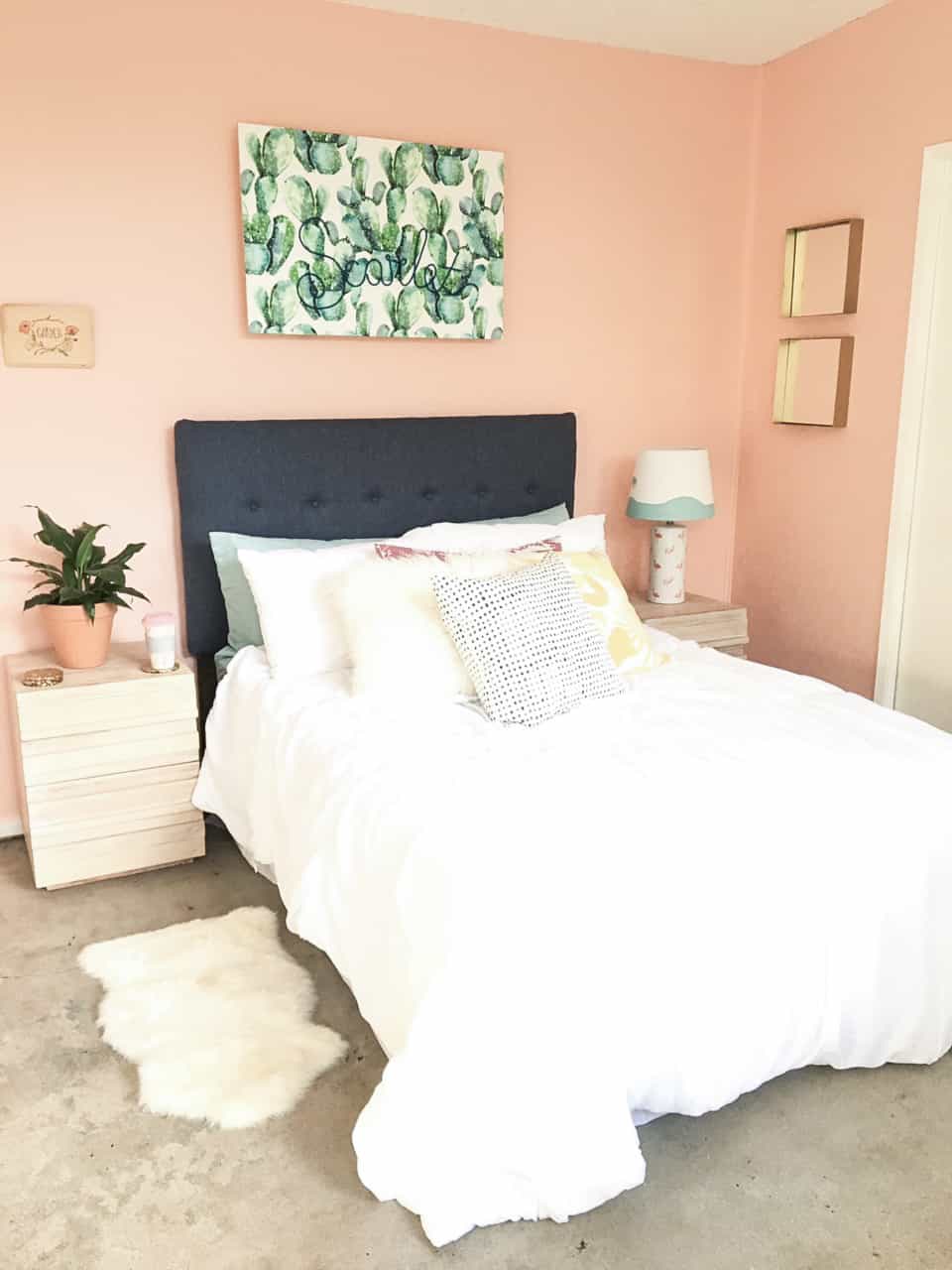 Scarlet absolutely adores her new room. What do you think? 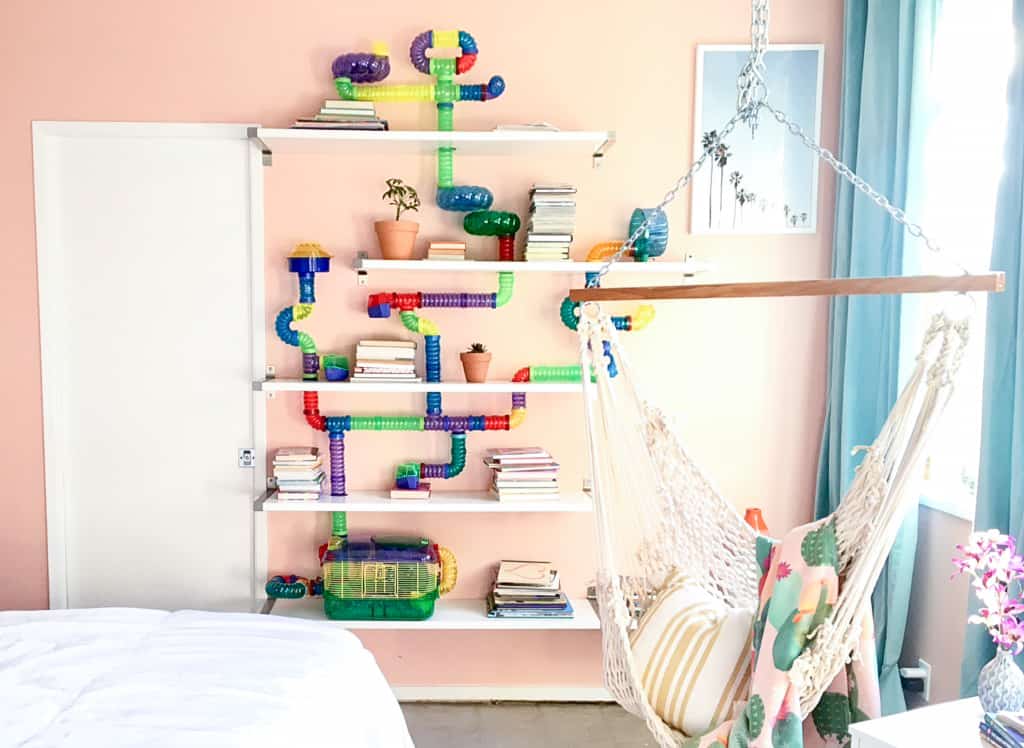 The desk is still my favorite part, though it’s not nearly as clean as it should be. I picked up the baskets and a set of drawers at Ikea (Alex drawer unit), which has helped her stay somewhat organized. 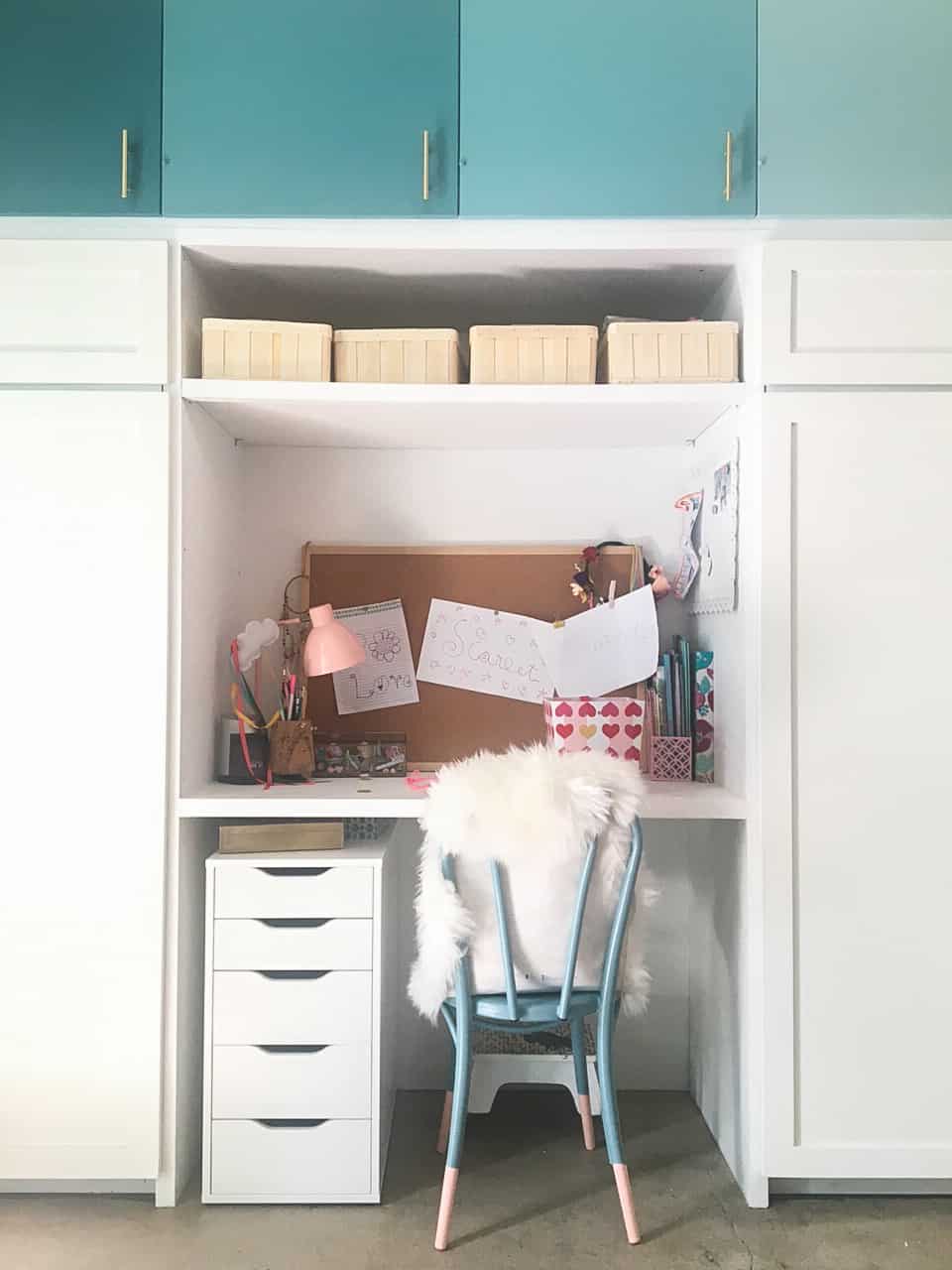 Hope you guys like it! Next up I’ll show you what I did with our master bedroom. It’s my fave.

This gave me so many new ideas! Love the blue cabinets. Thank you.

You did an amazing job!

Great job. Your bedroom looks amazing after the remodel. Thank you very much.

Excellent ideas to make a stunning new bed room from old. I have a similar plan in my mind, Thanks for the detailed post and good work.

Good job. Your bedroom looks beautiful after the remodel.

I admire you, you did wonderful job! I adore your bedroom very much. Color patterns are amazing!

Such a fascinating article on a lovely day like today; thank you for your efforts in creating such a beneficial article.

Thanks for the information you shared, I’m glad to see your post

The design ideas are very unique and interesting. I love it

This is an excellent article. This is, in my opinion, one of the best posts ever written. Your work is excellent and inspiring. Thank you very much.