Jacinda asked me to share with you a time-honored tradition in the Curtis household:  Un-Romantic Valentines Day.  Throw your man a super Un-Romantic V-Day and fall in love all over again! 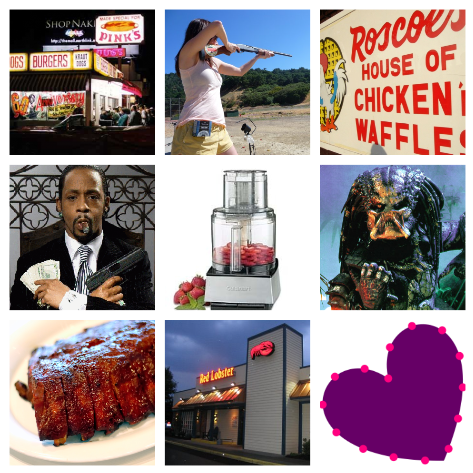 The story is this:  Early on in our relationship Carleton made it clear he thought it was a little unfair that men are expected to wow the ladies on Valentines Day AND anniversaries, while we all just sit back and wait to be showered with romance of a sort men don’t usually enjoy that much.  I thought that was pretty reasonable, so we made a deal:  On our anniversary he would plan something special for the two of us, and in exchange I would take on Valentines Day and plan something HE would think was fun.  It’s worked out really well for us, I get super awesome anniversaries, and I have a lot of fun creating Valentines Day treats for Carleton.  And the next day when they’re all broke from flowers and expensive dinners, his friends sometimes tell me how awesome I am, which I have to admit can kinda be the best part.

The pictures above are snippets from some Un-Romantic Valentines Days past.  Find out what we did, and maybe spark an idea or two for your boy after the jump.  And I am starting to run a little thin on ideas so if you can leave me some in the comments I’d be forever grateful!

1.  The first year we were dating I took him to Pink’s Hot Dogs and we had guacamole bacon jumbo dogs.  This was especially awesome because Pinks is an institution in LA and ALWAYS has a two-hour line… except on Valentines Day…the place was a ghost town.  Oh, and at one point he rolled up all the car windows, locked the child lock, and farted.  Ahh, love.

2.  Shooting Range:  Nothing says love like guns. (yes, that’s me in the pic)

3.  Roscoe’s Chicken and Waffles followed by Kat Williams comedy show.  Let’s just say we were out of place.  Not to mention I was 7 months pregnant and sitting next to a 350 pound man.

4.  One year Carleton gave me a food processor.  It was so awesome!

5.  One year we watched Predator and I made ribs.

6.  One year we went to Red Lobster thinking this was hilarious and un-romantic, but it turns out LOTS of people think Red Lobster is super-romantic and the place was packed.  But a man sitting across from us had total plumber’s crack hanging out of his pants, which was disgusting and made our day.

Last year we had breakfast with my mom (HA) and went to a horror movie, I can’t remember what it was called.

One year we did absolutely nothing, which was awful and proved Jacinda’s husband Rick’s point that Un-Romantic Valentines Day actually IS romantic, about as romantic as it gets.

Guess what we’re doing this year?? wait for it…VISITING MY IN LAWS!  But I think there’s a train museum in sacramento we might hit up.  Or gold mining.  Or indoor sky diving.  I’ll let you know what we cook up…or drop me a hint or two in the comments!

I'm thinking about taking my husband to play poker since he LOVES playing it and I always try and hold him back from spending too much on it. So think I'll come up with a dollar amount and put the cash in a funny card (that's the kind he likes!)and say something like…"Let's go play poker baby!" 🙂
I agree…un-romantic can be the best way to go especially after you've been together for several years like we have. It's his turn now. 🙂

omg, casino is a genius idea!

Oh oh! I got one. Sam and I are still just dating and totally without children so, I am taking him to the Wild Turkey Distillery in Lawrenceburg, Kentuckey. We're going to learn about bourbon…

you guys are geniuses! there's a miller factory near here…

I think the best "un-romantic" thing I've done for my husband was a two-part deal – First, I was able to identify the manufacturer of a guitar with an offset soundhole (before they became somewhat mainstream). Second, I admitted to him that I knew this because I read his Guitar World magazines in the bathroom. He told me he nearly proposed to me that day. (It ended up being a year or so later…) Yep, must be love. So I suggest learning about something he's really into and you aren't. You might find that you kind of enjoy being able to answer questions about whatever it is…

Um…the farting in the car thing totally cracked me up. Sometimes I think that my husband tries to "sneak" them out just to see if I notice. LOL

Thank you for this. I love un-romantic Valentine's Day!!

I love the idea of un-romantic Valentine's day… I'm really not into the whole Hallmark thaing that Valentine's day is. SO I'm taking my husband go-cart racing and then beer tasting at a microbrewery. It should be fun.

OMG – you are making me think I should mark the occasion – the last couple of years we simply let it slide…… Thankyou!

Ha! We are camping on the beach with all of his family. As a matter of fact, my in-laws are staying in the camping trailer with us! It's a good thing we've been together almost 11 years because this is actually halirious! On previous years we always go to a taco stand. It's empty so there is no wait and we eat yummy tacos. It's a tradition for us.

What a fantastic idea!!

julie, well played, you reminded me that once when we were dating c and his friends were talking basketball and he turned to me and said "if you can tell me what a backdoor cut is i'll propose to you right now". i had no idea. whatever, he still married me.

iris… seriously, in the same camper? you win, that is the least romantic thing i have ever heard of, HA
stephanie, go-cart racing is extremely genius, my husband would love it. i am googling go-cart places in sacramento right now

I highly suggest you go gold mining or "panning" for gold…..that's sounds awesome. Don't forget the beer, beef Jerky (the good kind), and a new knife.

DOUG i think you are my husband's twin. he got a new knife every year, until he couldn't remember to take it out of his pocket and got arrested at LAX…

If you're in Sacramento for Valentine's, try Hamburger Patties! Totally not a Romantic Valentine's place.

Then, if you're feeling in need of some culture, perhaps a trip to Side Show Studios –
Custom Tattoo Studio and Fine Art Gallery! Or maybe the Manufactured for Love show at the Sara Jane & Co gallery?

I've got a great Sac rec for you. RPM – indoor go-cart racing on these big extended tracks. My husband loves it!

Hands down the best thing about Sac town is Rick's Dessert Diner. It's 24 hours!

That's great! Try a miniature golf/pool night. Since we were too broke for a honeymoon, that's what my husband and I did after our wedding.

The pregnant Roscoe's Valentine's Day is hilarious! I've been wanting to take Brian to his all time favorite beer's brewery (Green Flash) in San Diego… I might have to plan an un-romantic trip. Camping is always good, paintball, anything with dirt bikes, loud motors, or whiskey.

Hmmm, let's see.
On valentine's day, I used to buy big juicy crabs for my four kids.(Very unromantic)
First, they would have crab races
Then, we would boil all the losers and let the winner go free!
Only kidding, they were all delicious!
PS My husband and I would have lobster.

Well coming to Sacramento is already pretty
Un-Romantic, so you don't have to try too hard. I'll have to agree with Tran's suggestion for Rick's Diner, if you like carrot cake make sure and have some there. If you love a good burger try Squeeze Inn http://www.thesqueezeinn.com/
Only down side is that they are moving to a new location and that opens on the 15th so you can have a belated Un-Romantic Valentine's (if you're still in town that is). Enjoy your time!

This year we are going to geek out and people watch at the renaissance festival that is in town. We go every year with friends but we are always a little bummed that we don't get to do everything WE want to do (read: eat as much medieval awesomeness that we can) so this year we are going alone!

We also have a tradition where I make a dinner that is pink and red themed: shrimp cocktails, strawberry jello and pudding parfaits, red koolaide, and usually some kind of awesome sandwich. It is a tradition inherited from my family, and my mom always made us individual scavenger hunts that led us to our box of chocolates. My husband and I have done this a few times and the best part is laughing at the clues my husband writes for me; he is a terrible writer and they always end up like garbled Dr. Suessisms! Hilarious!

Jaime – I think you should take my mom's advice and give Carleton crabs for Valentine's day.

Once, for my husband's birthday I got him a flying lesson. He loved it! You could probably make it a lesson for two. Or helicopter lessons.

Although, as a 7 year wedding anniversary gift I (the one afraid of heights) took my husband skydiving. Going to play paintball would be a good activity. This more of an unromantic gift idea(on the sly)… DIY style. An old man shaving kit. The old style gillette razor your grandpa (maybe dad-like mine) used. It is a highlight of my husband's routine! The art of manliness has articles on how to shave like an old man. You can find razors for cheap at antique malls/stores. To clean them up you just get some scrubbing bubbles to start with and a toothbrush and some baking soda if necessary. You want to put in a new blade for use. To gift it include a hand towel and wash cloth with a shallow bowl like the metal one from ikea (which is the one my man uses) or a mug and a brush, you can find a cheap one at Walmart or drugstores. My husband being a jack of all trades made his own out of bois d'arc. But that is for when he becomes a connoisseur. Razors are CHEAP at the drug stores they come with safety holders for the blades. Tabac is a good lather soap- they last forever before you bock at the price-My husband has had his over a year and it is maybe 1/4 used. You will want to include an aftershave if they do not have a favorite. You can also try the beauty supply stores open to public. So the good news for you…the plus is if they use it correctly ( I suggest art of manliness website for shaving tips) it will be the best kiss you have ever experienced. AND if you can get them to shave your legs… wahoo the best shave ever!

[…] gem eraser rings for classroom valentines, Jaime adores her rose gold flats (perfect for her un-romantic Valentine’s Day outfit), and Jacinda is planning out a tasty cocktail with this mixer to celebrate.  There is a […]