Since it is almost November, and beautiful juicy red pomegranates are starting to appear, I was inspired to share the story of Jaime’s pomegranate tattoo, My Pomegranate Tattoo Step-by-Step, for your future tattoo inspiration. 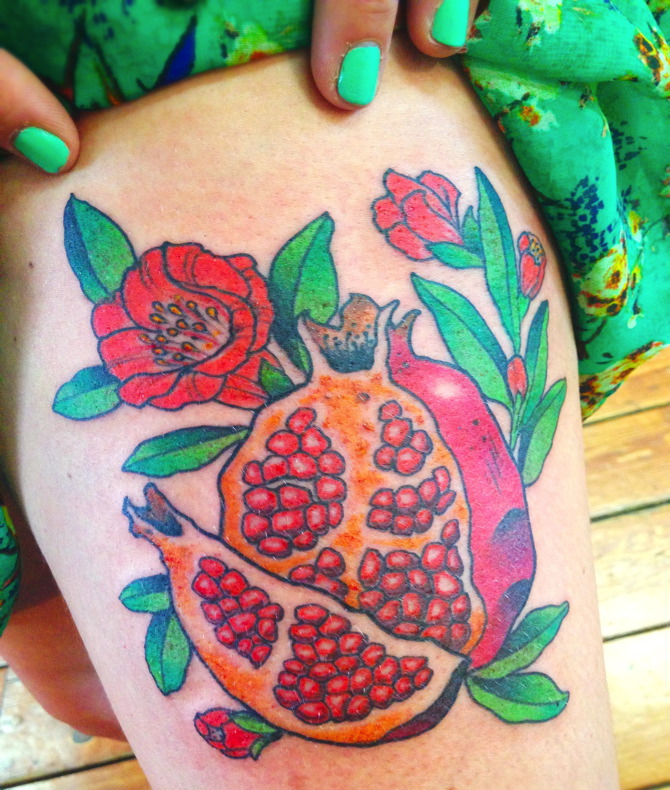 Recently I took a trip to beautiful Portland, OR to visit my dear friend Alice and her family. Our kids all played and husbands rode bikes and beards were seen and local craft microbrews were drank. Alice’s husband Lewie is a world class tattoo artist at Atlas Tattoo parlour in Portland. He gave me my Scarlet tattoo a few years back. I knew I wanted another while I was in town.

Why a Pomegranate Tattoo?

I decided on a pomegranate because we had a pomegranate tree at the house I grew up in, before my parent’s got divorced when I was very young. With my recent life upheaval, finding out I was adopted, memorializing these memories of that house with a tattoo felt right to me. Also, the pomegranate is a symbol of prosperity and ambition, and I think they are beautiful. I realize tattoos aren’t for everyone, but if you are curious about the process, I took pictures along the way and you can see how I got my pomegranate tattoo after the jump…

First, I looked through a bunch of books and found so many pomegranate tattoo ideas. I found a pomegranate I liked in a book about Japanese matchbooks. It was a great choice. Lewie drew his own version. 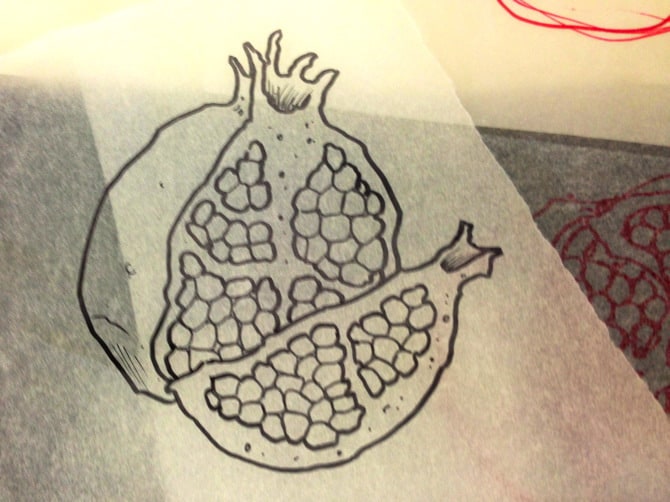 I wanted it to be a little more girlie and beautiful, so he consulted some pictures and added pomegranate flowers and leaves. Pomegranates, besides being a Persian symbol of prosperity and symbol of fertility in Iran and Afghanistan, symbolize growth of the family, and have connections to Greek Mythology as well.

Ancient Greeks believe Persephone, the Greek goddess of spring, became trapped in the underworld because she was intrigued by the pomegranate fruit, which was planted there by the God of the Underworld, inspired by Aphrodite, the Greek Goddess of love. For that reason Pomegranates are a symbol of the abduction of Persephone. Pomegranates have also been linked to Demeter and Athena.

This delicious red fruit is also mentioned in the Koran and in Buddhism. used as imagery for decorative purposes on 15th century fabrics from Italy and the Orient.

Pomegranates have a wealth of symbolism and different meaning. It is also understood that the apple of paradise in the Old Testament was actually a pomegranate, so it also has biblical meaning among a community of believers, even though it is still referenced as an apple in Europe and the United States.

I loved it, and got Jacinda’s text approval before proceeding of course. 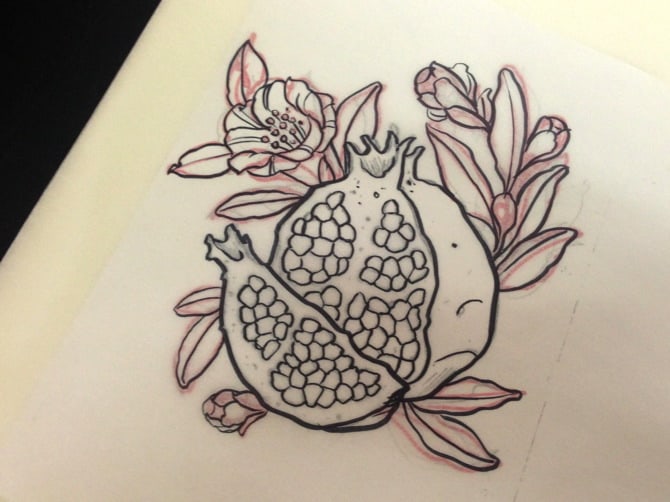 Lewie transferred the design onto my leg, and we moved it around a couple of times until I liked the placement. You have to have a lot of patience to get it just right. Also, tattoos hide cellulite. Just FYI. He started by outlining it black, it was a lot of hard work. If we had stopped there, I would have had a lovely minimalist pomegranate tattoo. 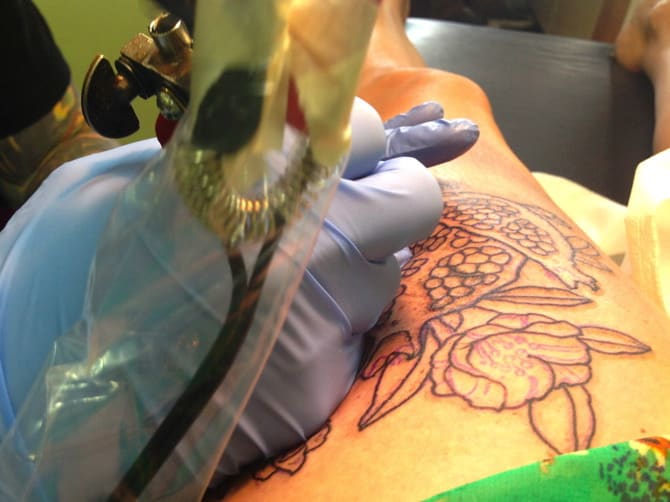 Then he did some shading in black as well. I was starting to see the charm and beauty of this pomegranate tattoo which would also make a gorgeous classic blackwork pomegranate tattoo, but I wanted more of a scarlet splash from this tempting tattoo. 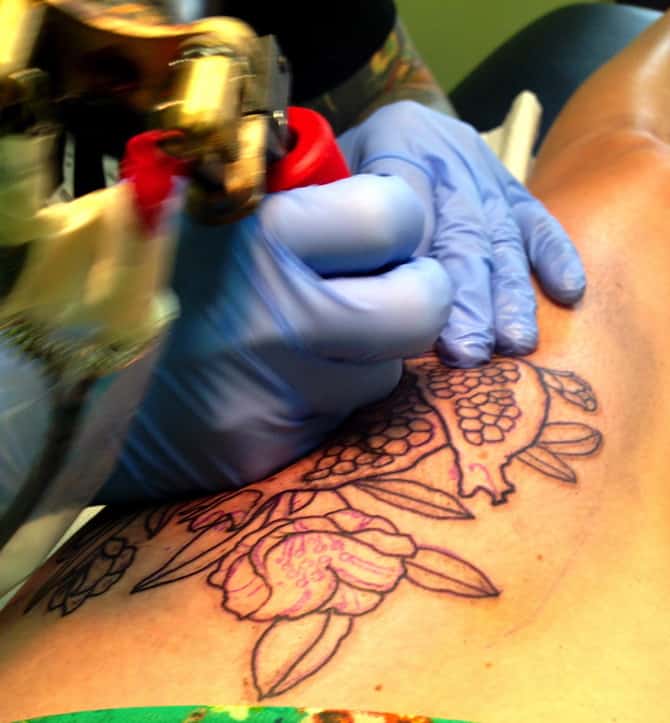 Here it is with intricate shade and the rest of the detailing. Yes, it hurts, but I had less pain then I imagined I would have. Maybe my thighs have enough padding to make it less uncomfortable then previous tattoos on my ribcage. I have smaller tattoos which were more painful than my bright red pomegranate tattoo, despite their smaller size. Neither is the most common area of skin for such tattoos. 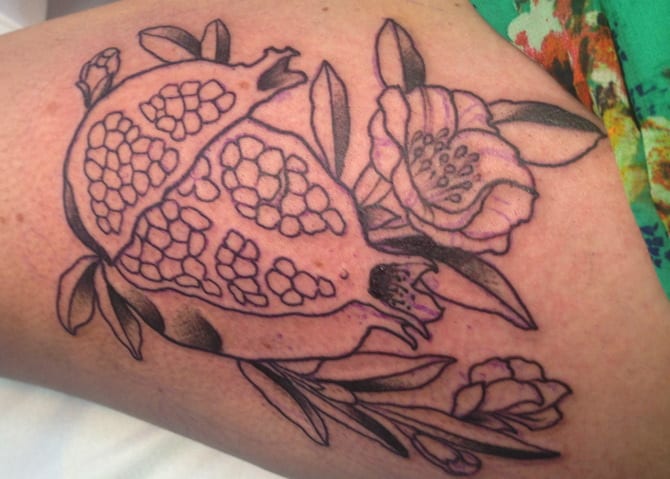 Next, Lewie added green to the leaves. I loved it! And I needed a break for a few. It had been about 1.5 hours of tattooing at this point. The beauty of the tattoo is really starting to prove that it was a wonderful choice. 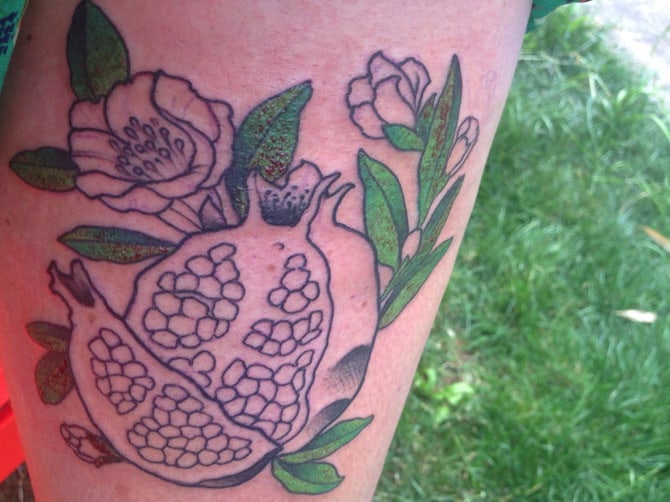 Next he mixed several colors to get just the right shade for a pomegranate. It’s a tough pigment color that required different kinds of inks, a little red, a little purple, a little orange. The flowers are more orange than the fruit itself. It’s a colorful tattoo and definitely not a common tattoo. I wasn’t going for minimalism. 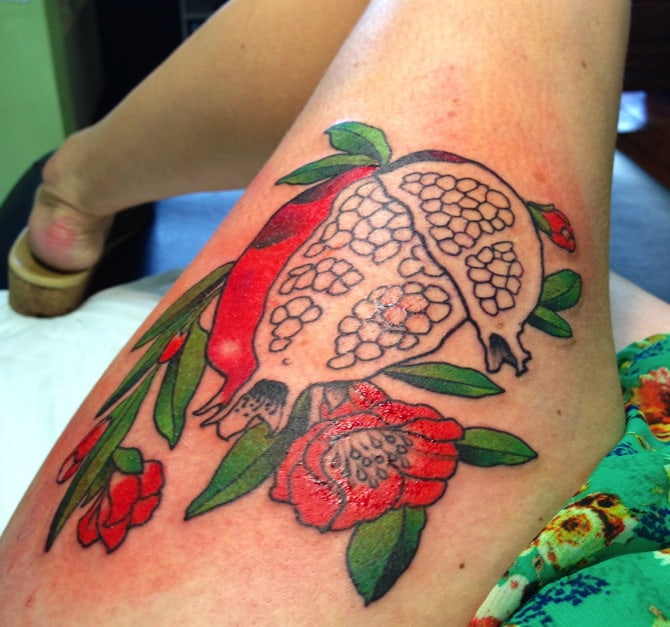 Next up was the final touches of color on the flowers, abundance of seeds, and all those beautiful green leaves and sweet details of the branches. Some of the light red flecks are actually blood from the fresh tattoo. We didn’t add any white to the highlights. I was fatigued from the pain. I think I prefer it this way. It was time to start focusing on aftercare. 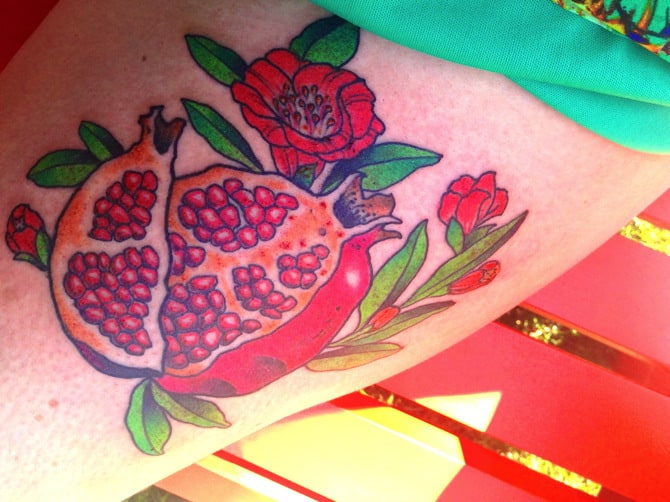 And that’s my new pomegranate tattoo. I am so happy with it.

The ingredients of thick leaves, a beautiful cluster of pomegranate seeds, and attractive shade of bright red color make this eye-catching, cool pomegranate tattoo a really pretty choice. it’s totally in vogue! I feel like this tattoo showcases the intricacy of the subject, immaculate details, and fresh touch of the tattoo artist. I love My Pomegranate Tattoo Step-by-Step.

Could you envision any other tattoos in the fruit category? Lemons or peaches or an avocado tattoo, might also make a popular choice for different reasons.

I love it! Thank you for sharing. I have six. They all mean something and I was past 40 when I started. You are right, they’re not for everybody but they are right for us.

I think it looks great! The colors really pop. I have two tattoos – an ankh + tribal combo on my lower stomach and a lotus flower on my back. The ankh, I hardly ever think about anymore – its not the same after multiple pregnancies. The lotus, I’ve been thinking of adding on maybe a vine and a couple more blossoms for a total of three to represent all of my kiddos.

Beautiful! I have 3 tattoos. A butterfly I got on my foot when I was 18 and moved away to college. I have a very simple line drawing of an ankh that circles around my wrist and reconnects at the top of the ankh that I got after my first miscarriage to symbolize the circle of life. I also have a 5 petaled Rose in between my shoulder blades to symbolize the 5 phases of a woman’s life. My best frien and I each got one after I got married and before she moved away with her partner. I have plans for a peony in memory of my grandmother (not sure where I’m going to put it yet though) and a family garden on my back with the birth month flowers of my husband, me and my kids along with 3 cherry blossoms to symbolize the ones we lost. Both of those tattoos may have to wait though. Repairs to our home kind of trump new tattoos unfortunately!

That is gorgeous! I have 14 and can’t wait to save up for my next one!

Great post, because I didn’t have enough time to think about changing the look of my interior. But the quarantine forced me to think about some really good ideas for my house, and this blog was extremely helpful.

Indeed, I find the appearance to be rather pleasing. The hues jump out at you. I have a tattoo of a lotus blossom on my back and another of an ankh inside a tribal design on my lower stomach. Having had many pregnancies has made me forget about the ankh almost entirely. The lotus, I’ve been considering expanding it with a vine and more flowers till it has three in total to stand in for my three children.